At long last a producer has won the Scottish Album of the Year Award, but most importantly it's for a record of extreme cultural importance in turbulent times

On Friday night (6 Sep), in a grand ceremony complete with a chandelier-filled ballroom at Edinburgh’s Assembly Rooms, it was announced that Auntie Flo's Radio Highlife would be the first-ever producer-led record to win the coveted Scottish Album of the Year (SAY) Award. With previous inclusion on the SAY longlist in 2013 for Future Rhythm Machine and the shortlist in 2016 for Theory of Flo, it truly was third time lucky for Auntie Flo, real name Brian D’Souza.

It transpired, however, that D'Souza was the only shortlisted artist not in the room on the night of the award ceremony. At the time he was crowned winner of the £20,000 prize, he was, fittingly,  closing the Tower stage at the Skye Live festival in Portree with a jubilant DJ set. “The announcement actually happened towards the end of my set,” D’Souza recalls of the moment he found out he’d won. “I noticed my phone going a little crazy and then when the organisers showed up with a bottle of Champagne, I knew I must have won!

“I celebrated by playing one of my all-time favourite tunes (Laurent Garnier’s Man With the Red Face) and serving Champagne to the crowd who were none the wiser; they probably thought I do that every set! It was almost poetic to be in one of the most beautiful places in Scotland and doing what I love doing the most when I found out the news.”

Auntie Flo’s Radio Highlife was released in October last year and is the first record of its type to win the award, hopefully paving the way for more producers to get the recognition they deserve in future years. Of course, it’s not the first time African Highlife music has been celebrated in The SAY Award. With Sacred Paws scooping the prize in 2017 for the uplifting Strike a Match, Radio Highlife further highlights the many genres and subcultures bubbling in Scotland’s ever-vibrant music scene. 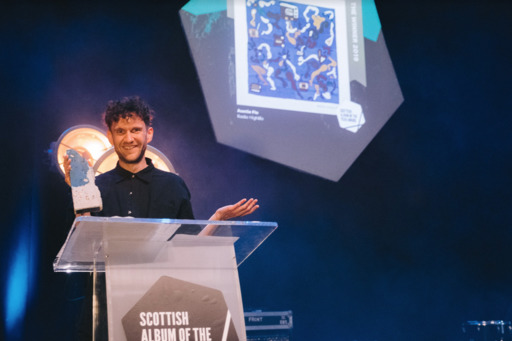 “If Radio Highlife does stand for diversity, connectivity and inclusivity, then receiving an accolade such as this means everything,” says D’Souza. “It’s where the music can become more important and transcend the cultural niches it often rests in.

“On purely musical grounds, it means a lot – I’ve always tried to do something different, say something unique and sound true to myself with my productions, so it’s hugely satisfying that this approach has lead to recognition in this way.

“The songs and sounds that make up Radio Highlife have been the literal soundtrack to my life as a DJ over the past seven years – every tune loaded with layers of personal memories that make it an extra special album for me."

He continues: "At the same time, I really don’t feel the record is about me alone. If anything it’s proof that if you approach everything you do with an open mind and open spirit, doors open and beautiful serendipities happen – anywhere in the world – as proved through the collaborations that went into this record.

“I hope it proves an inspiration to others, where cultural, languages and racial barriers can be broken down through the universal language of music. I also hope Radio Highlife continues to earmark Scotland as a place of openness, diversity and compassion in a time when all the above seem to be getting questioned.”