A last-minute cancellation means there's no Songhoy Blues to ease the crowd into the show tonight. It's just a straight-for-the-jugular sonic assault, Vampire Weekend honouring the Usher Hall with back-to-back hits with a minimum of fuss or frills.

For their first Scottish show in six years, Ezra Koenig and gang deliver a neat, two-hour set that manages to be exactly as polished as you'd expect, while still delivering a few twists and turns. The consistency of the VW discography is one of the band's greatest assets (further augmented by this year's Father of the Bride), ensuring that even when the set list runs to 26 songs, almost every one is greeted with the sort of enthusiasm usually saved for a band's biggest hit.

The first half is an enjoyable splash of technicolour delight with jams like White Sky, Unbelievers and Step, but it's after the raucously extended version of Sunflower that the show really comes to life (new touring guitarist Brian Robert Jones really lets the erratic energy of his namesake loose here). Bruce Springsteen's I'm Goin' Down is given a pristine makeover, flanked by fantastic new cuts This Life and Harmony Hall, before the band decide to play basically all of their fastest songs in a row.

Diane Young literally sets the ball (the giant globe towering over the stage) rolling, before Cousins, A-Punk and California English (2021 is beautifully fleshed out into a fully fledged song as a breather before the latter). The way the band clatter through at breakneck speed is astounding; each song sounds like it's testing the limits of intensity, but the band are barely breaking out of a trot. 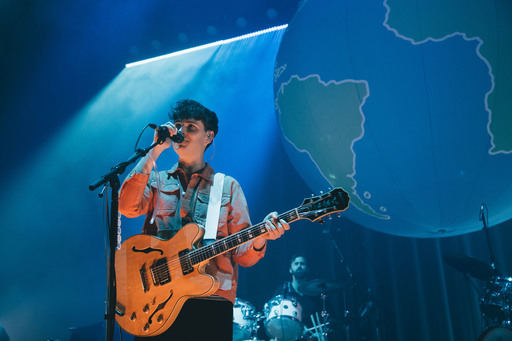 Vampire Weekend have slowly moved away from these moments over the years, opting instead for contemplative poignancy. It's a move best exemplified by the main set-closing Jerusalem, New York, Berlin, with Koenig leaving the guitar to one side and opening his heart to the doring masses.

The band take a couple of requests during the encore – both perfectly primed to bring the house down; Walcott and Hannah Hunt. Despite being fairly predictable (and excellent) choices, it seems like the band could easily turn their hand to whatever was asked of them (they thankfully ignored the Wonderwall shout), displaying a cohesive tightness all night that could easily go unnoticed given their casual, playful stage presence.

Vampire Weekend have never demanded attention, they've simply trusted that their fantastic songs and refined professionalism will win you over. In doing so they've quietly become one of the best live bands in the world.