The Great Eastern 2021: The Review

First announced almost two years ago, the inaugural Great Eastern in Edinburgh's southside manages to impress despite all obstacles

Sandwiched neatly between Storm Arwen and a rare November snow, The Great Eastern may be beset by myriad natural impediments and dropouts but still manages to deliver an uplifting day and night of excellent entertainment across three great venues.

One of the first acts out of the gate, managing to play in the little daylight available at this time of year, is Bikini Body in Summerhall's Gallery Bar. There must only be a couple dozen in when they kick off with a fierce Young Dad, but by the time they finish with Mr. Tinnitus, the room is completely packed. Technical issues give a dissonant edge to Happy Painting in keeping with its eerie tone, while Daily Mail gets the crowd going. Signature tune, So Posh, now feels noticeably heavier, Vicky Kavanagh's growing vocal chops getting both more unhinged and smoother in aid of the up-and-coming band's frenetic style.

From the frenzied to the serene, Anna B Savage masterfully entrances the Main Hall crowd with her gorgeous, off-kilter balladeering, using space, silence and her hypnotic voice to fantastic effect. However, back in the Gallery Bar hotly tipped post-punks DEADLETTER are whipping up a storm and picking up the woodblock baton from Bikini Body. Frontman Zac Woolley prowls the stage (and the crowd) with menace, throwing out a few Ian Curtis-style chops while delivering his snarky diatribes, often dripping with cynicism and doe-eyed sincerity in the space of the same song. Fit for Work thrills as expected, but closer Something in the Air is where the band really deliver their chaotic best.

Over at The Queen's Hall, Tracyanne & Danny spin some wistful yarns to accompany their sparkly indie-pop (the best of which involves attempted wooing and a glass eye), while Broken Records probably aren't the best band for the smash'n'grab nature of this festival. Still sound-checking ten minutes into their allotted time, it's a slow start for the band's many moving parts, but as invigorating as ever once it gets going. 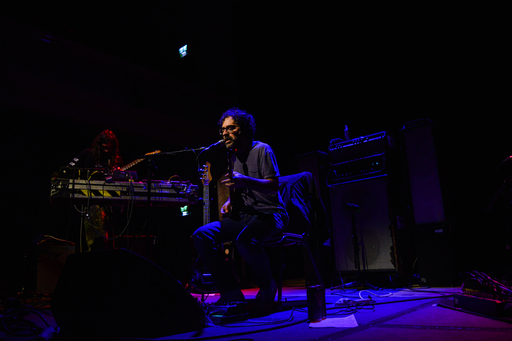 Another band to watch, The Joy Hotel make a powerful impression with their typically inscrutable style. There are moments of sleazy 70s rock, offset with deep, gothic lighting, the seven-piece band riffing and soloing with enviable confidence. But there's a clear pride in their work, each member locked in and out to deliver everything you forgot a rock show could be. Junior Brother also impresses with an even more laid-back approach, easily combining hilarity and sincerity with an earnest, alt-folk sound that's just a whisker from all-out traditional.

However, Summerhall's Main Hall starts to noticeably empty during that set in preparation for the two ostensible headline acts. There's barely room to drop your beer in King's Hall for BC Camplight, entering with his now-favoured Stetson, telling tales of woe and whoa in equal measure. He can get the people swaying with a crooner like I Want to be in the Mafia, but he really lets loose on ecstatic songs like the set's closer, I'm Desperate.

Despite the overlap, BEAK> is just as packed in The Queen's Hall across the street. There might not be as much chat as from BC, but they are just as adept at getting the crowd going. Never short of a blistering riff, the band push and pull steadily, faking out before incredible drops. Wulfstan II might be the most immediate example, but Blagdon Lake hits with a different energy to bring things to a brilliant close.

As with any festival of this nature, you can't see everything. But as a taster for mostly small, new artists, The Great Eastern is a wonderful event. We can only hope it becomes a yearly fixture.