Damon Albarn and co bring Merrie Land to life in the way it was intended to be heard, then cast us back in time with songs depicting a period that Albarn and many others like him now yearn for

Given the God-like status Damon Albarn has acquired since the hedonistic days of Blur, it seems appropriate that this evening sees him perform within the Albert Hall’s church surroundings. As he graces the stage, light from the stained glass windows shines upon him and his bandmates in The Good, the Bad & the Queen – Paul Simonon, Simon Tong and Tony Allen – the four ‘evangelists’ glowing in front of the devout worshippers below as they begin their sermon.

They are here promoting last year’s Merrie Land, which was released with only a modest fanfare eleven years after the ‘supergroup’ toured their eponymous debut. Albarn has always been a great observer of "modern life" (which is sometimes 'rubbish', sometimes not) and both of the band's records have provided snapshots of his world view at that time.

Their debut offered the frontman’s perception of London during a comparatively simpler, pre-Brexit era. In preparation for writing Merrie Land, however, Albarn travelled North, noting what he witnessed as UK citizens fought with one another over the nation’s looming departure from the EU. The lyrics written on this trip are central to a poignant record which beautifully documents a time of great uncertainty for remainers and leavers alike. Albarn therefore highlights the importance of Merrie Land’s message by showcasing it in full before the band take an early encore, returning with tracks from their debut.

Their frontman commences the show holding a Punch and Judy-style puppet. It's a knight draped in a St George’s flag. Albarn explains it's parodying Tommy Robinson, who has become worryingly idolised by many with a rose-tinted memory of the 'good ol’ days' in England. It's both clear and unsurprising where Albarn’s loyalties lie on Brexit and, in case there was ever any doubt, the album addresses them openly. Each of the Merrie Land tracks confronts his heartfelt concerns about what lies ahead for the country. The patriotism he holds is free of hatred. Instead, he sings as an Anglophile concerned that he may one day see the things that make Britain great disappear. 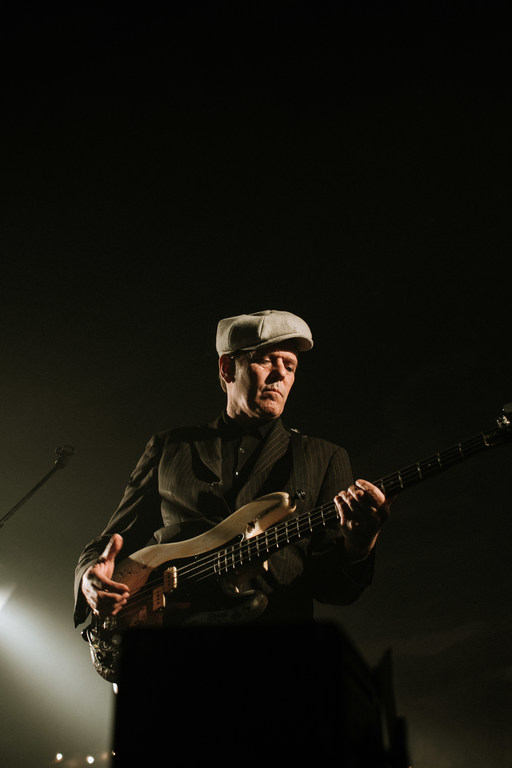 Both musically and lyrically, it's exciting to see the new album brought to life on tour, complete with a string quartet, who sit above the stage on the venue’s mezzanine. The Wurlitzer sounds on Nineteen Seventeen add appropriate notes of nostalgia to its accompanying words, while The Truce of Twilight allows a welcome singalong chorus. But the album’s generally linear flow provides only sporadic moments for the crowd to get involved.

To show adoration during Albarn’s poetic laments feels strangely intrusive and, in turn, sees fans oddly detached from the music at times. For a record which has a seaside flavour and sounds of the funfair (Blackpool and Penrhyn were two of the many stops on Albarn’s journey), the live performance of Merrie Land offers very few twists and turns. Nevertheless, the whole album playback perfectly encapsulates life in England today and is a testament to TGTBATQ’s collective efforts to document events.

Such wholly forgivable shortcomings during the first half are counterbalanced after the very brief interval. Kingdom of Doom is a clear highlight, which is embraced with both arms by the crowd. Albarn himself seems more enthused at this point: he's now got his key messages across and is altogether more relaxed on stage while reinvigorating old material. The song’s lyrics – 'Drink all day / 'Cos the country’s at war' – still resonate today, although this time around the conflict is internal.

After a strong rendition of Green Fields, the band draws the night to a close with The Good, the Bad and the Queen, the eponymous final track from their debut album. It's a wonderfully ramshackle, piano-thumping foot-stomper which ensures the gig ends on a high, and the four evangelists take their bows graciously.

Whilst the sermon doesn’t consistently connect with worshippers throughout its 90-minute duration, it remains significant and important to hear. Furthermore, it's a pleasure to listen to Merrie Land in the way it was intended to be heard – and then be cast back in time with songs depicting a period that Albarn and many others like him now yearn for. For this, we say Amen.