Confetti cannons, a light up unicorn, wacky costumes and more abound in another thrilling turn from The Flaming Lips as they celebrate 20 years of The Soft Bulletin at Edinburgh's Usher Hall

When The Flaming Lips come to town it's comforting to know that you're in for a night of controlled surrealism, that the familiar eccentricities will all come to pass, and that hopefully there'll be a killer soundtrack to it all. The lure of a Lips show is such that you know there'll be lasers and confetti, wacky costumes, a range of inflatables and an epic finale.

As Wayne Coyne explains before a note is even played, the band are revisiting The Soft Bulletin in its entirety tonight as part of a 20th anniversary celebration. This album has been played in full a number of times in the last decade, but its messages about love and bugs and mysterious, emanating lights are necessarily timeless. Coyne exalts in his role as bandleader, frontman and conduit through which the audience can express their admiration for the band (pretty much everyone on the floor gets a piece of him at some point in the show). 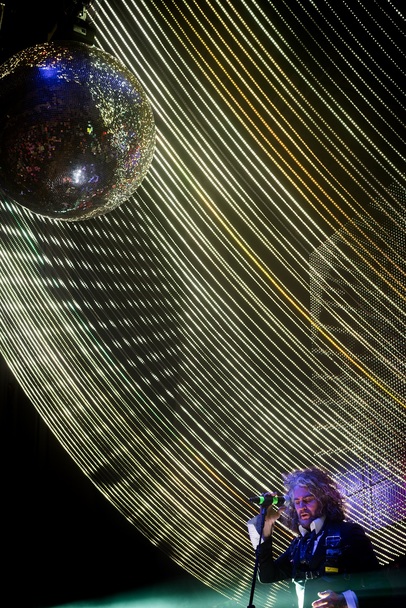 Image: The Flaming Lips at Usher Hall by Kat Gollock

After a theatrical warmer in the form of Richard Strauss' Also Sprach Zarathustra, the band launch into an outrageous rendition of Race for the Prize, a performance so bubbly, colourful and energetic it's hard to see how they can possibly follow it up. There are lasers, confetti cannons and guns, and the sort of singalong associated with a festival headline set. It's all capped off with Coyne proudly clutching a giant, inflatable 'FUCK YEAH EDINBURGH' before tossing it into the crowd to be broken down for parts. Those five minutes are basically the entire show in microcosm, but luckily the band continue, faithfully recreating their watershed album and constantly amping up the audience into a frenzy.

The Spiderbite Song comes with a meandering tale for an introduction, while Buggin' makes use of the crowd (kind of) for some insect noises. Waitin' for a Superman is the most plainly melancholic moment of the night, tapping into a rare sadness as Coyne's voice belies the vulnerability that live shows tend to omit from the Lips experience. Feeling Yourself Disintegrate concludes with an epic solo, the most traditional portion of the evening that is immediately upended by Coyne's inflatable hamster ball shenanigans during the lulling Sleeping on the Roof.

The most expected and most bizarre moments (depending on your knowledge of the band's antics) come during the double encore. First, Coyne parades through the audience on an LED-lit unicorn (singing There Should Be Unicorns, naturally), then goes into Yoshimi Battles the Pink Robots, Pt. 1 from the front row with a giant pink robot behind him. He counteracts the incredible slowness of the inflation by calling for a restart under the pretext of having the crowd improve their karate chop noises, which they dutifully oblige.

The lesson is learned for encore number two, and a giant rainbow is fully inflated before the band return for Do You Realize?? The song is both celebratory and moving, with quite a few tears falling amongst the waves of confetti. It's a beautiful end to the night, with band and audience in perfect-ish harmony, revelling together through the magical communicative powers of live music.