The 1975 bring a vital and political performance to Glasgow's Bellahouston Park, closing out this year's string of Summer Sessions shows in true style

Following a slew of shows in Edinburgh's Princes Street Gardens and Glasgow's Bellahouston Park, tonight's show from The 1975 marks the end of 2019's Summer Sessions series. Overnighting from headline slots at Reading and Leeds to play for a comparatively small crowd of 5,000, it does feel intimate. But, more importantly, it also feels vital and political. “Glasgow, we’ve been wasted the last two days,” lead singer-songwriter Matt Healy admits, “You’re the loudest audience always. You’re the only crowd that can get us through.”

After a pink sun sets over the high rises, The 1975 – famous for their musical and performative excess – unleash the days-old song People for only its third ever live performance, a Marilyn Manson meets Glassjaw-esque punk screed with enough F-bombs to satisfy even the most discerning teenage contrarian. It’s an anthem that screams with the rage of billions of millennial and Gen Z 99 percenters, powerlessly watching the world burn (literally) as Donald Trump and Boris Johnson pat themselves on the back. As far as a setlist is concerned, it’s one hell of an opener, and the crowd sings along as if it’s been knocking around for years.

The 1975 use this energy wisely, expertly pacing their performance between high and low, flawlessly playing hit after hit. For the uninitiated, the band really flexes their range – there’s upbeat indie pop (TOOTIMETOOTIMETOOTIME), jazzy offbeat hip-hop (Sincerity is Scary) and haunting shoegazey dream-pop (fallingforyou), to name a few.

Their songs are often intermingled with important messages of hope and refuge for today’s doomed youth; Give Yourself a Try deals with mental health and addiction while Loving Someone is a much needed support of LGBTQ+ people whose rights are threatened by Brexit and the exponential rise of fascism. Healy introduces the latter by touching on the recent controversy of having a consensual kiss with another man in Dubai, where being gay is punishable by death. “If you’re a boy and you kiss boys, you shouldn’t get in trouble. Play the fucking song!” 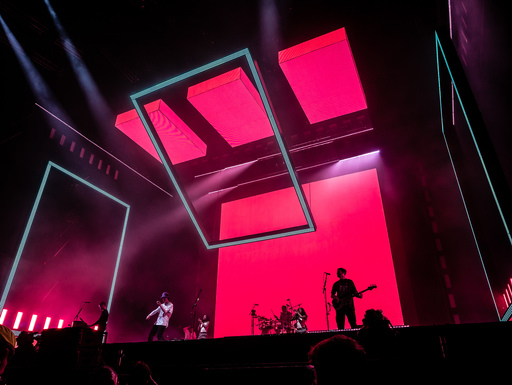 Image: The 1975 by Gemma Bovenizer

The 1975’s visuals are almost as intoxicating as their music, the stage camera capturing far more than the merely mimetic. Each song has its own aesthetic, with their signature rectangular outlines different colours for different songs. There’s a warning neon yellow, with 'WAKE UP!' printed across the screens for People, and purple with Pride flags for Love Somebody. The visuals go lurid pink for Love Me, an upbeat 80s-indebted pop song “about how hard it is being a rock star,” as Healy explains tongue-in-cheek, concluding: “Yeah that used to be an ironic joke but I think I’ve blurred the lines too much.”

The art mixes with live footage of the band on-screen – sometimes in black and white, sometimes with running, scrolling text, often lyrics or quotes, superimposed on the band. Perhaps the most arresting is the colourful basic shapes sliding across the screens, sometimes interrupted with internet-like scrolling and Snapchat-style stickers. It’s an aesthetic that reflects our nightmarish postmodernity, amplifying The 1975’s call for an active, politically woke youth. In contrast, the simple black and white words of 16-year-old eco warrior Greta Thunburg, as she reads from a powerful essay set to music from the band's upcoming album Notes on a Conditional Form, are simple yet devastating.

Before the night is over and everything gets a little too serious, Healy throws us back to “a simpler time” when the band wrote only about “smoking weed and blow jobs” playing Chocolate and Sex for the encore, before finishing with The Sound, an infectiously happy circular pop song that channels Alphabeat. It’s the happy ending, that escape into music, that we all need.