Shirley Collins, Daniel Higgs, Terminal Cheesecake and Gnod are just some of the exceptionally talented artists who thrill at this year's Supersonic Festival in Birmingham

Much has already been said of the brilliance of Birmingham’s Supersonic festival being largely due to the diversity of its line-up. This year, that spirit of weaving together sometimes incongruous – and sometimes jarring – sonic ideas is fully on display even within the sets of certain acts. Case in point: Croww, a great producer/DJ/plunderer from Manchester will happily massage your senses with a dreamy slow jam before melting your face off with throbbing slabs of grindcore and noise.

Other groups on the line-up take a different tack. Japanese band GOAT, not to be mistaken with the Swedish band of the same name, are strictly rhythmic. Obsessively so, in fact. Their set emerges from silence to a movement of patterns conducted by all four members on one drum kit, before branching out to include saxophone and bass that serve only to add more layers of beats to an ever-rolling journey of propulsion. It’s one of the best shows we’ve seen and it’s barely 11pm on the opening night of the festival.

The first act we catch on Saturday afternoon is a duo from Germany called Joasihno. They mix programmed analogue percussion, with midi xylophone and an array of little keyboards to create subtle minimalist tunes that are totally enthralling. We hear reports from others around us of things we’ve missed while stood mesmerised by Joasihno’s motorised gadgetry. Do.om Yoga! Jennifer Walshe! Sometimes at Supersonic, there’s just too much good stuff to see and get involved in.

Over on Stage 3 (set-up in a small courtyard of the legendary Custard Factory), Cattle are a good counterpoint of explosive maximalism. Two drummers, heavy bass, electronics, and a vocalist who epitomises raw power bash away for around 40 minutes with little regard for their own physical well-being. Later in the same location, Terminal Cheesecake bring their psych noise ruckus – which sees the intimate third stage left in a similar state of destruction.

Back over on the main stage – located at South and City College – we catch Mario Batkovic. The Swiss, Bosnian-born accordion player summons great majesty from his instrument. He veers between traditional, classical and contemporary experimental styles – performing all with upbeat exuberance. Even when the content of the songs conjures up some quite weighty introspection. 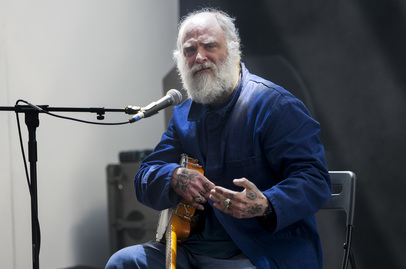 On Sunday opening Stage 2 is Daniel Higgs. The former Lungfish frontman treats us to a banjo-led cosmic narrative of sorts called The Tribulant Trips. There are stories and songs about drugs, family and modernity. There’s also a stern warning to all Supersonic attendees who might be at risk of bursting their respective "music bladders," before he leads us through some participatory vocal harmonising. Back in the courtyard, Bristol three-piece Olanza fire up – rattling the stage with their melodic riff-led workouts.

Later on, the program within a program, Modern Ritual takes over the Main Stage for a couple of hours. We’re treated to songs and words linked by the thread of rituals in contemporary Britain – from folklore to explorations of fictional landscapes. It’s a transportive set, with Laura Cannell drawing on ancient violin techniques and Charles Haywood closing out the show with a 15-minute snare drum workout which is far more engrossing than you might expect.

Salford psych-noise band Gnod begin closing out the evening back in the Custard Factory. Two bass players and a good sense of humour make them one of the more unique and enduring acts of their ilk in the UK today. It’s psych you can sing along to with a grin from ear to ear. There’s more pure fun to be had when Tirikilatops hit the stage. These dayglo Dadaists bring beats and a number of outsider themes – from wasabi nuts to living in a simian world (a rewrite of Madonna’s Material Girl) – to the industrial streets of Digbeth.

Supersonic do a great job with really saving the best ‘til last this year with their main headliner, Shirley Collins. Flanked by a handful of musicians, she leads us through a number of songs learned throughout her long and storied life – as well as anecdotes galore. It's a fantastic and incredibly moving set, one that will stay with us for some time.

Supersonic, you knocked it out the park once again. It's so important to have this annual city-break of adventurous sounds from yesterday and tomorrow. And we already can’t wait to return in 2019.