There are enough individual moments of brilliance to enjoy, even if this Stephen Malkmus show is never more than the sum of its parts

You have to feel for Stephen Malkmus a bit. By fronting one of the most revered indie-rock bands of all time, one that disbanded at the height(ish) of its fame, he has played himself into a corner for all subsequent projects. Not only is everything he does compared to Pavement, but any attempt to deviate too far from the slacker-rock he pioneered is met with suspicion. The Jicks get away with it by hewing close enough to the classic Pavement sound, but the electronic experimentation of Groove Denied – the first truly solo Malkmus record, tinkered with over the last 15 years – was a step too far for some fans.

Before he's even played a note, someone shouts “glad to see the guitar”. Later, someone else requests he “play some Jicks”. The visible confusion at the more forthright electronic flourishes, paired with the visible delight at Pavement covers, makes for a wildly uneven night, at least as far as the audience are concerned.

Malkmus seems, at times, a little lost by himself on stage, falling foul of some backing track issues and misplaced loops. But he's never been an artist to berate himself for the odd mistake (he remarks as much after a particularly egregious false start) and, overall, he appears to relish the freedom of being able to do his own thing without feeling the need to pander. The Pavement covers are somewhat obscure – Spit on a Stranger, Black Out, Frontwards, Fight This Generation – avoiding any 'hits' as such, but still providing moments of elation for those who've never had the chance to experience them before. 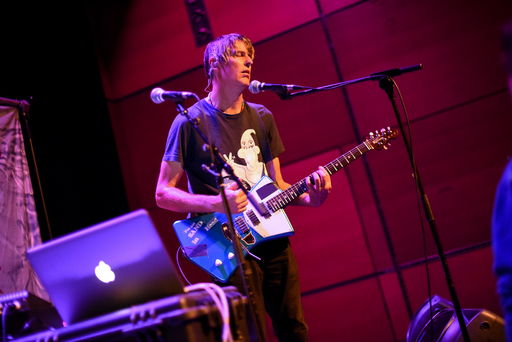 Placing the Caribou-esque electronic stomp of Belziger Faceplant or the synth-noodling Rushing the Acid Frat or Viktor Borgia alongside scrappy jams like Frontwards causes a good degree of tonal whiplash, even if both styles can be appreciated separately. The songs that really fare the best are the new ones that pare down the experimentation in favour of classic Malkmus lyrical meandering, like Grown Nothing and Ocean of Revenge.

There's a poignant, unremarked-on moment in the form of a cover of Silver Jews' Trains Across the Sea, by Malkmus' friend/ex-bandmate/ex-flatmate, the late David Berman. Malkmus even changes the lyrics to reflect his own age and beer count ('In 53 years, I've drank 54,000 beers...'). It's a beautifully low-key tribute to one of the greatest songwriters of a generation, and someone intrinsically linked with the career of Malkmus, too.

In all, it's a remarkably loose set – even by Malkmus' standards – that struggles to really find any cohesion, but there are enough individual moments of brilliance to enjoy, even if the show is never more than the sum of its parts.