Strolling onstage carrying a bottle of Buckfast, it's in the live arena that slowthai really comes into his own

It's Monday night and several hundred fans are happily queuing to get into the largest hall the sprawling SWG3 arts complex has to offer. This venue was once a bonded warehouse built to serve the nearby Glasgow docks. While its been decades since any cargo was handled in the vicinity, SWG3 remains a suitably urban environment in which to check on the progress of slowthai – perhaps the most exciting young rapper the UK currently has to offer.

The man formerly known as Tyron Frampton has been making waves on the back of his debut album, Nothing Great About Britain. It's the kind of LP that has received breathless reviews from broadsheet journalists and ageing hip-hop heads alike. But it's in the live arena that slowthai really comes into his own. He strolls onstage tonight carrying a bottle of Buckfast, a ubiquitous stage prop for touring acts in Glasgow, and launches straight into the title track from his album – an anti-establishment song that doubles as his calling card. 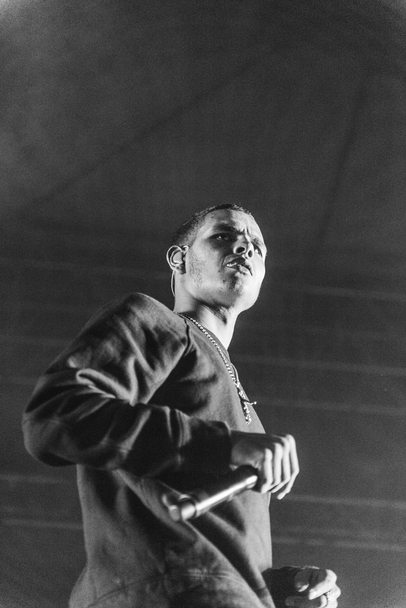 Image: slowthai @ SWG3, Glasgow, 14 Oct by Kate Johnston
With socially conscious lyrics, informed sloganeering and canny sampling, it's no wonder slowthai has been likened to a one-man Public Enemy. While he's a long way from the precision rhymes favoured by Chuck D, he's a smart operator behind the mic. Between tracks he engages the enthusiastic crowd in a sincere manner. Pointing to the giant chrome shields that line the back of the stage, he says: "These mirrors are here to show you something great about Britain." He means us, of course.
He later cheerfully informs the crowd to "Fuck the gram and just enjoy the party" – wise words at a gig where seemingly half the audience is intent on filming every single track. At first glance, slowthai looks like a classic bad boy who might upset your mum, but really he's the sound lad who insists you take the last taxi as he doesn't mind walking home. He rounds off tonight with a thumping rendition of Doorman. With this kind of performance, he won't ever have to worry about getting into nightclubs again.
https://www.slowthai.com