Tonight’s show indicates that Slade will last well beyond the heat death of the universe, with Merry Christmas Everybody their strange legacy

The showing tonight at SWG3 could take on the air of the un-reviewable, as it becomes clear that, at its core, we stumble into a tribute night. Leave your value judgements at the door; all that matters is if openers Sons of the Seventies can nail Kansas’ Carry On My Wayward Son and Deep Purple’s Highway Star, which they do. It’s easy to dismiss these songs – some prog, mostly pop – in the internet age thanks to the history-altering power of memes. But say what you will about these songs; they’re hard to play, and even harder to play this well.

On the other hand, our venerable headliners Slade are a special case of pseudo-tribute band. All who remain of the original line-up are drummer Don Powell and guitarist Dave Hill, which puts Slade in a strange position among UK legacy acts akin to other chop-and-changers Sugababes or The Fall. They’re a group well on their way to becoming an outrageously garish musical ship of Theseus.

If there was ever a container for the Slade-ness of Slade, it was surely Noddy Holder, who left the group in 1992. Even years later, his absence is keenly felt. But tonight showcases the other vessel of the group’s essence. The slight figure of Dave Hill cuts about in his regalia looking like the remarkable pairing of a boomer gone Christmas shopping and Ziggy Stardust – or a botched Neil Young test tube clone – reconfigured by a number of costume changes such that each outfit is distinguishable only by its glitter-to-material ratio. 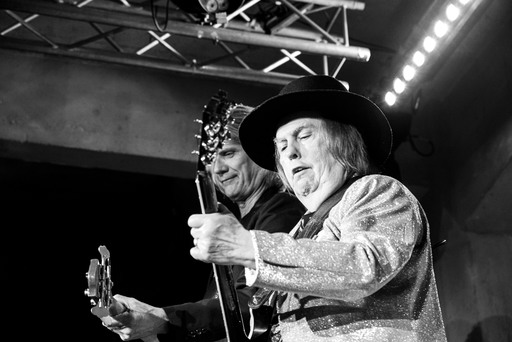 His UFO-shaped ‘SuperYob’ guitar makes an appearance for a mere solo during Mama Weer All Crazee Now, before quickly being stowed away and replaced by his disappointingly normal, purely practical brown guitar. Still, he’s a showman, windmilling his hand across the strings, geriatric Pete Townshend-style, in an uncannily reminiscent style to his band’s 70s heyday. He beckons the audience, and they duly yield. He’s a joy to behold, doubly so because he could just as easily settle quietly into well-earned retirement.

There’s another costume change, and the group re-emerge on stage with elven hats, Hill’s brandished with 'Slade' in popping red. “It’s been a rubbish year,” says Hill in a disarming moment of clarity (albeit one universal enough to avoid betraying any particular political position) before applying the salve: “look to the future now.” What follows is the only song that could bring a Slade set to a close.

It doesn’t matter how many times you’ve heard it, and it doesn’t matter how many times they’ve played it. Merry Christmas Everybody, even without Holder’s maniacal yell, is undeniable; as ubiquitous as any carol. Even if their other hits fade – and tonight’s show indicates that they’ll last well beyond the heat death of the universe – that’s their fittingly strange legacy. To the future.