Pile lead a bill of unabashed loudness, proving that they're more than just underground darlings thousands of miles from the scene they represent

Tonight’s bill is a rather handy reminder of the importance of wearing earplugs at shows. It’s especially essential at the looser, more ramshackle venues, of which the always great Nice N Sleazy is one. It can, and tonight very much does, get loud. The bands on stage are not doing anything to try and dampen the chance of early onset tinnitus.

American Clay provide a swirling shoegaze warm-up, but when Cutty’s Gym pick up the volume, they immediately shatter teeth. Like a far more pleasingly unpolished IDLES, with the punishing pummel of a curtailed Swans. They are quickfire and rampant.

The crowd for Boston’s Pile dissipates a little, but those here for them are impassioned and captivated. Beginning with the less straightforward studio-devised songs of this year’s Green and Gray, Your Performance and Firewood are slow trudges compared to some of their most well-loved tracks. Behind the band, which fills the dead air between songs with ringing feedback and has little time for crowd pleasantries, one of the cases their gear has come loaded in is visible. It bears the slogan “Bannon is a fascist pig”, referring to the former White House aid of the “neon cartoon” of a President referenced in Your Performance. It’s a foreshadowing of the night’s best moment yet to come, and of Pile’s current, and welcomed, willingness to comment on the current political climate with direct venom. 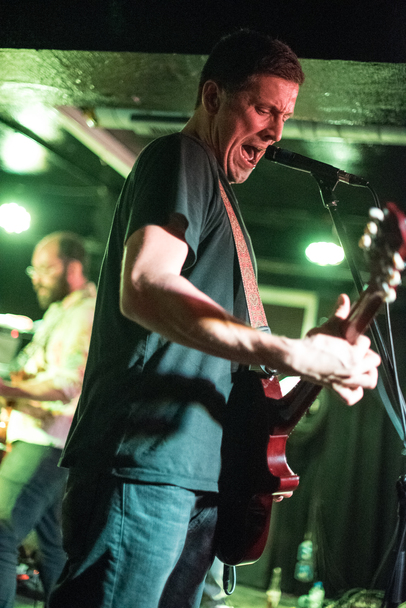 The melodic hardcore of Bruxist Grin brings the crowd to life midway through. There's a slightly embarrassing failed attempt to start that chant we always seem to have to hear at shows; some of the crowd could be infiltrators from ongoing fresher’s festivities going on around the city. It’s certainly a diverse demographic of audience member for Pile, even if it isn’t filling the room to its brim. It’s quite an achievement for what is essentially a band appreciated mainly by the underground.

The final flourish makes the whole show worth it. An alternate version of My Employer segues crushingly into the whipsmart smearing take down The Soft Hands of Stephen Miller. Frontman Rick Maguire abandons his guitar and (literally) hangs from the rafters to howl a particularly modern kind of protest song.

The show is over, but there are chants for fan favourite Prom Song, and while they think it’s a little “self-indulgent” Pile oblige with a rare encore. For a band known for being leaders in their local scene, it’s a classy gesture for loyal fans in places they don’t often return to.