Twenty-two years on from the release of The Teaches of Peaches, Peaches continues to smash confines and limitations to deliver a one-of-a-kind show

A Peaches gig isn’t just a gig: it’s a SHOW. There’s a buzz in the air, and the fact it’s a Monday night has evidently not stopped people turning looks as we wait in eager anticipation.

Tonight’s show is part of Peaches 20th anniversary tour for album The Teaches of Peaches – her first album to be released under her now iconic stage name. On release in 2000, The Teaches of Peaches shook up the music industry. “I knew I was doing something right,” Peaches said on the album in an interview with Vice. “It was like people were frozen, going, ‘Do I stay? Do I hate this? Do I love this? Is this music? Is this art? I don't understand what I'm looking at. Do I want to look at this? Why is she being so aggressive?’ All of those questions are the reason why I did it.”

Eventually, the lights drop and we hear a strange warbling, then Peaches herself takes to the stage, donning her version of ‘elderly’ attire, complete with spectacles and an oversized vulva hat. Cheers and bemusement greet her as she commits to the bit, leisurely strolling around stage.

She then rips off the get-up, swiftly changing into a gold leather jacket, donning only pants underneath, and launches into an assured rendition of Set It Off. Simultaneously impressive, sexy and powerful, and she’s only just getting started. Indeed, a few songs in she declares to us: “I want to walk on you!” and promptly jumps into the crowd, eager arms outstretched and supporting her as she walks across us, continuing to perform and not missing a beat. 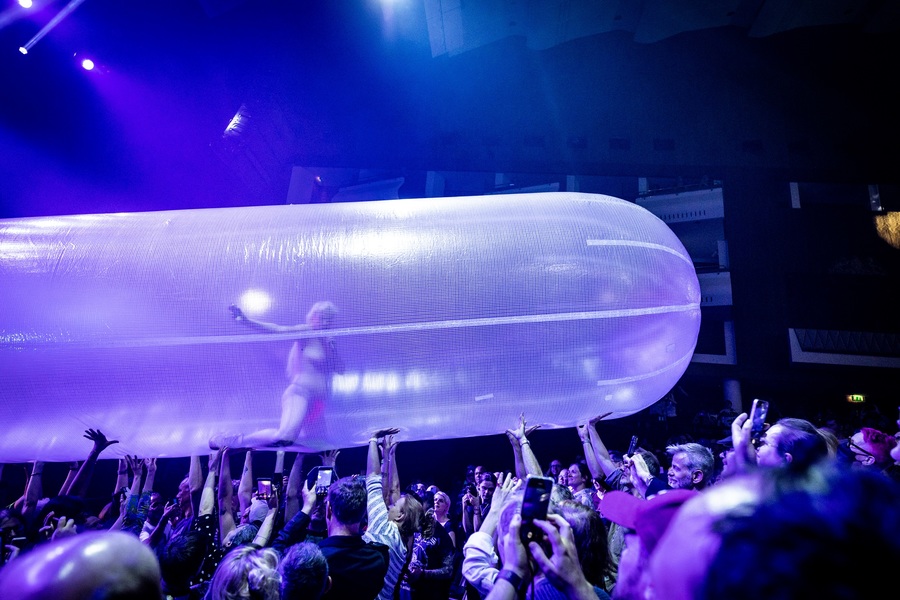 The grit and simplicity of The Teaches of Peaches – produced by herself on a Roland synthesizer and drum machine – provides the perfect jumping off point for a live show; electric guitar solos, her incredibly talented dancers donning leather and bondage, and her many exquisite costumes contrast theatrics with grit, sex with humour.

Her technical prowess as a musician is equally evident throughout the night – whether in the swagger of delivery of vocals on Hot Rod, or in her mixing of tracks onstage. Fan favourites follow the playthrough of her first album, with the crowd fully peaking at Boys Wanna Be Her. At times the energy from the crowd wanes somewhat, but that is in no way reflective of tonight’s performance.

Indeed, Peaches truly pulls out every stop: whether performing to us inside a giant inflatable dick (Dick in the Air), or dancing alongside her backing dancers adorned in vulva costumes (Vaginoplasty). There’s always a risk that ‘big’ gestures can come across as gimmicky. However, that’s not the case tonight – every part of the show is purposeful and plays to elevate her work.

Smashing confines and limitations more than two decades on, tonight more than proves the enduring legacy of The Teaches of Peaches, and Peaches virtuoso as a performer. One thing can be said for sure: nobody could want for a lack of showmanship tonight.