For a band nearly 20 years into their career, Metronomy know how to pack a punch. Tonight they bounce onto a blue-lit stage in boiler suits akin to a space age reworking of Devo, and as they launch into opening track Lately, it's clear that this bunch are set on delivering a show that's as entertaining as it is musically impressive.

September saw the release of Metronomy Forever – the London-based quintet’s sixth studio album – which once again delivered an eclectic record of electronica, post-punk disco beats, and breathy vocals channelling an early David Bowie. Tonight they carry this eclecticism with ease, bouncing between fuzzy grunge basslines, piercing synth melodies and techno drum machine beats in a matter of moments. The resulting energy pulsates through the crowd, who watch with glee and diligently dance to every track this evening.

The band are on fine form, each bringing their own presence to the line-up. This is an act that exudes personality and charisma, and the chemistry between members is a joy to watch. Uber-cool drummer Anna Prior is magnetic in her understated drum style and soft backing vocals; synth players Oscar Cash and Michael Lovett bounce gleefully in semi-choreographed sequences; frontman Joseph Mount croons breathy lovelorn lyrics; bassist Olugbenga Adelekan travels across the stage with impressive buoyancy. This all makes a strong vessel for Metronomy’s eclectic wall of sound. 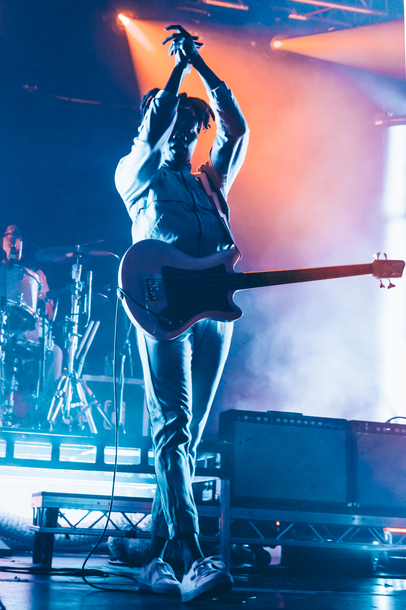 Particular highlights include hits The Look and The Bay, which are relished with expected gusto among the crowd. But perhaps more impressive is the level of enthusiasm that new tracks garner tonight. Salted Caramel Ice Cream, Lately and Insecurity are performed flawlessly, producing a knowing anticipation in the audience that is on par with the older tunes.

Lying Low provides the soundtrack to an abrupt break in the set where the synth players are the only members left on stage. They launch into the track, a pulsing instrumental electro-techno jam, while the two synths are slowly pushed together. It’s a moment of electrifying genius that reveals a careful level of craft in the show’s design.

Metronomy prove once more that they deserve their place at the head of the electro-grunge-pop table, and if tonight’s performance is anything to go by, they're here to stay. Their sound is stronger than ever, carried by musicians who exude a pride and pleasure in their work. From the look of the audience tonight, it’s a pleasure that goes both ways.