Forty years since releasing their debut album, Madness are looking and sounding sharp; a perfect combination of social conscience, wit and good cheer

With a trio of acclaimed late career records (taking in 2009’s The Liberty of Norton Folgate through to 2016’s Can’t Touch Us Now) and a series of massive shows at holiday resorts and fairgrounds across the UK, it’s fair to say the nutty boys’ fourth decade is shaping up better than almost anyone could have hoped.

Their mixture of upbeat ska and everyman charm has made them perfect music for the masses (£50 ticket prices aside) and it’s partly because they’re still utterly unpretentious about what they do.

Despite thousands of fezzes and pork pie hats cramming into Princes Street Gardens, there’s immense camaraderie between the band and their audience. Before the madness ensues, however, it’s time for a quick appearance from scouse Brit-poppers The Lightning Seeds.

Perhaps knowing that Scotland might not take too kindly to such shenanigans, frontman Ian Broudie resists the urge to break into Three Lions, but instead there are singalong versions of 90s hits The Life of Riley and Lucky You, while Sugar Coated Iceberg is dispatched with a conviction that belies the rather prosaic nature of some of the songwriting. 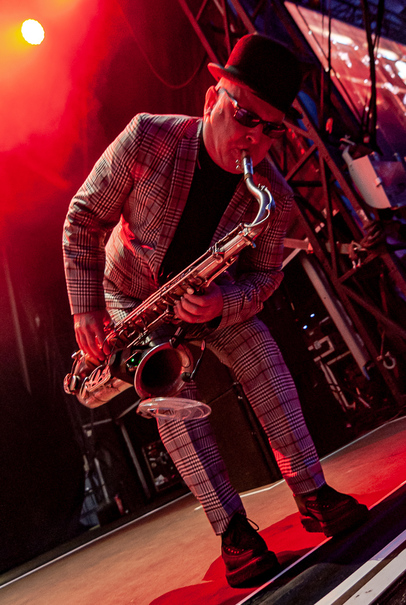 Forty years since they appeared on Top of the Pops (alongside Jimmy Savile, as Suggs reminds us), Madness are looking and sounding sharp. Upbeat tracks like One Step Beyond and The Prince are as catchy as ever, while newer tracks like NW5 and the rollocking Bullingdon Boys have a real fire to them. But Suggs and co’s real talent is in capturing moments of British life in a three-minute pop song.

Ending on a superlative run through of House of Fun, Baggy Trousers and Our House before a closing It Must Be Love – Suggs: “I’ve tried all the rest, I’ve got the scars” – Madness leave the stage as a perfect combination of social conscience, wit and good cheer.