Kathryn Joseph: From When I Wake @ Summerhall, 15 Aug

Kathryn Joseph gives a stunning performance of her Scottish Album of the Year Award-nominated album, From When I Wake the Want Is

Before Kathryn Joseph even appears, we're struck by James Johnson’s captivatingly decorated stage in Summerhall’s Dissection Room. Acute mirrors arc tall and skeleton-like around a beautiful piano, which itself has two delicately-placed mirrors branching out of it. Across from the piano is a metallic sculpture with limbs reaching outward, with one prong delicately holding a glass of red wine.

Joseph seems to float onto the stage, looking briefly, almost curiously, at her audience before resting onto her piano stool. She begins her first song, IIII, facing directly away from the audience; we can only see her face reflected back at us. When she does turn to us, reaching into the chorus ('This is not a way out'), the effect is tangibly powerful.

For the rest of the evening, she holds the audience in the palm of her hand, playing cat-and-mouse with her gaze. At times, she seems to embrace us, at others, she turns her back completely. It’s a relationship as fraught as those she sings of. 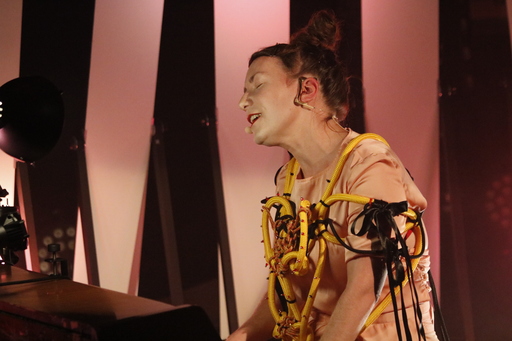 As she finishes her third song, And You Survived, the sound of wind erupts through the room. Joseph stands up, picks up the glass of wine, and stares straight into one of the upright mirrors. After some moments of silence, it’s as if Joseph reaches some kind of resolve. She sits back down at her piano and begins Tell My Lover. She seems defiant, decisive.

Such is the allure of Joseph’s performance. She moves so quickly, yet so smoothly between states of speculation and states of assertiveness. Beyond her powerful lyrics, it’s her stage presence that makes this set special. It’s somehow like being inside her room, inside her space. Like we’re watching on as she works through the thoughts pressing on her. This isn’t just a gig, it’s a performance.

Perhaps the most moving moment of the set comes during ^^, her final song. Stunning piano echoes through the room as a recording of Joseph’s daughter rings over her. As Joseph takes to the microphone for the final time, the sound is so beautiful, so vulnerable even the coldest heart in the room must be melting.