Thankful and sweaty by the end, Peggy's vital and energetic live show is nothing short of powerful

From taking to the SWG3 stage, JPEGMAFIA (or Peggy as he is endearingly known to most) at points fades into an animated silhouette against an ever-changing screen of semi-surreal cartoons, whilst at other points is a blue glimmering god addressing his creations. From braggadocious and aggressively contorting to mild-mannered and maniacally hilarious, the rapper is as wholly in control of his own appearance and performative mannerisms as he is in command of the league of sweltering fans with all eyes on him.

At least half of the dark warehouse space is invaded and occupied by an anamorphous and near unidentifiable pit of ecstatically jumping bare skin, throwing lashings of sweat and beer all the way from the inner circle to the outer.

Opening with Jesus Forgive Me, I Am a Thot, surfing on vocoder he half-yelps 'You better count your blessings for real' – a proclamation that we should appreciate the good things, perhaps such as getting the chance to witness a performer so in touch with his art as Peggy. Throughout the set, his black bandana flutters and flails to the beat of bashed in drums and hi-hats that crack and crash in frantic explosions. Among many, the title track of his latest album All My Heroes Are Cornballs stands as a powerful demonstration of the successfully subtle but important transition the production on the backing tracks goes through so as to ensure their enduring quality in a live setting. 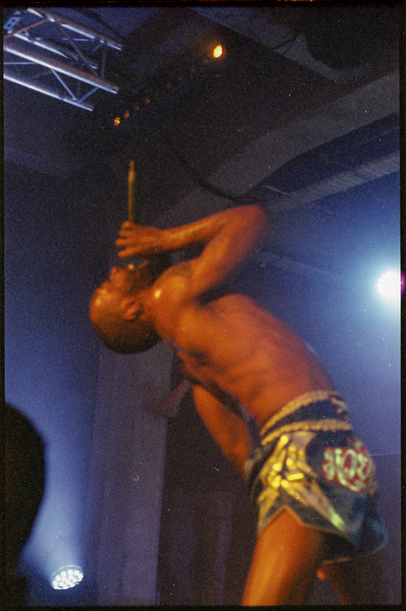 The glitchy vocally-driven beat of Baby I’m Bleeding kicks in and fires an already engaged crowd into overdrive. Peggy doesn’t even rap every line – to an extent this is filled in by the hundreds of voices trying to keep up with the track's irresistible flow – but it hardly takes away from such a vital performance.

On I Cannot Fucking Wait Til Morrisey Dies, white appropriation of black art and culture is humorously but briefly critiqued to the rapturous joy of the room who burst out in unison with 'Fuck a Johnny Rotten, I Want Lil B'. At the end of his set, calls for one more song is strangely but entertainingly met with an improvised and amusingly butchered Auto-Tune singalong of Carly Rae Jepsen’s millennially-legendary Call Me Maybe. By the curtain-call, Peggy has exerted himself so much that his body, now clad in a worker’s hi-vis vest, is as moist as those in the pit – but as exhausted as he should be, he still states his thankfulness to the audience for the final time of many.

Sweaty is the new sexy, and damn, Peggy is sweaty.