Hayden Thorpe's opening set is somewhat slight compared with what follows, but it's a gorgeous showcase for his plaintive ballads, with time for covers of This Mortal Coil (Song to the Siren) and his former band, Wild Beasts (Palace).

The aim of Jon Hopkins' Polarity Tour is to explore “the two disparate elements of harsh and fragile in my music.” To say that this is accomplished over the set's 90 minutes would be a serious understatement. The first 20 minutes consist of slow, contemplative pieces played on just grand piano with occasional guitar, cello and violin. They're eerily beautiful, and the subtle changes of light intermittently foreground and background the performers, creating haunting shadow effects that wouldn't be out of place in an Ingmar Bergman film. 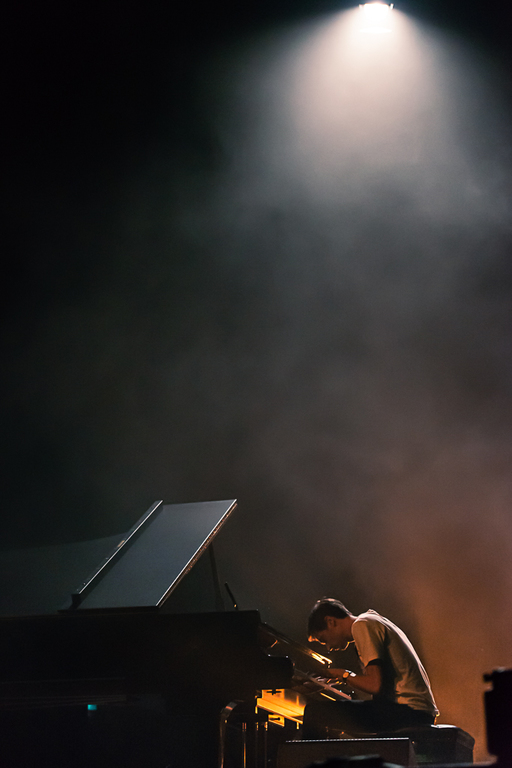 Then, the accompanying players leave the stage and Hopkins saunters towards the DJ rig in the middle of the stage. From here, the mood changes completely as he starts to construct layered beats with occasional snippets of harsh noise, which builds and builds until there's basically a rave taking place. One guy even gets ushered out by the stewards for dancing (it's an all-seated gig), though he'll have the last laugh.

This first electronic foray is only about ten minutes long, and soon the reflective exercises in minimalism and elegance return. But with the second electronic section, Hopkins goes all in with strobes, pounding synths, drum tracks and incredible drops. It isn't long before the whole room is on its feet, driven by the infectious rhythms and herd mentality.

This duality repeats one more time into the encore, with short moments of ethereal ambiance providing much needed respite between probably the most raucous skills the Usher Hall has ever seen (certainly for a seated show, providing some moments of panic for the poor stewards before they accepted the dancing masses). In exploring this dichotomy, Hopkins shows himself to be a master of two seemingly disparate styles of music. And what may appear jarring on paper works in beautifully complementary fashion. This show isn't just immacutely performed, but strikingly original.