While it's risky to play a set that forgoes every song that made you a household name, anyone who doubts the genius of Jarvis Cocker is just in plain denial

The cult of Jarvis Cocker has grown and mutated over the last 25+ years to the point that any performance is expected to be a chugging smörgåsbord of angular dancing, dry wit and kitchen sink drama disguised as philosophy. JARV IS... is ostensibly a new band, but this is really the odds'n'ends Jarvis roadshow. And despite the setlist being mostly made up of unknown or unreleased songs, he doesn't fail to live up to the hype on any count.

He sets the tone immediately, placing himself on a mini-podium at the front of the stage, voguing with a faux-baroque hand mirror, scanning the audience through the tiny reflection. But the pretence soon drops as he leaps onto the stage for a thunderous breakdown – the first of many for the night. Further Complications and Children of the Echo hew closer to the traditional Cocker wheelhouse, full of indie licks and acerbic put-downs, starting the night off on familiar footing. 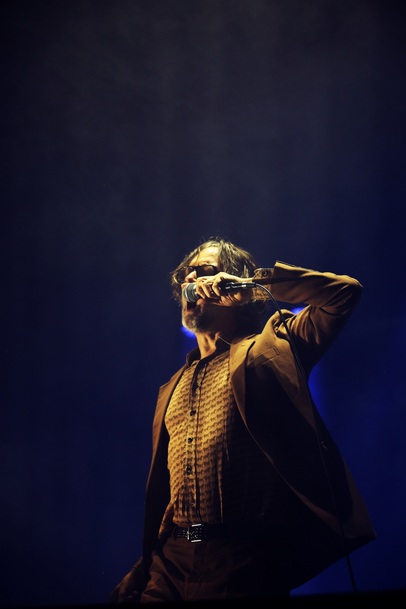 Image: JARV IS... at Leith Theatre by Roosa Päivänsalo

There's a sense of playful experimentation that shows a re-energised Cocker more interested in looking forward than just rehashing his canonised material. However, this is commonly achieved by utilising the sounds of the 70s and 80s; lounge disco (You're in My Eyes (Discosong)), house (House Music), dub (Swanky Modes) and motorik (an imperious Must I Evolve?). There's an emphasis on dancing that takes this show out of the realm of your standard Brit-indie fare, and no one is happier about this than Cocker himself who can barely restrain his taut gesticulations, moving from robotic to lithe in the space of a hip-roll and generally throwing himself around the grand Leith Theatre stage.

A few solo covers make appearances, as well as one Pulp deep-cut (His 'n' Hers) and the Relaxed Muscle drunken lament, Mary. Between songs Cocker is typically chatty, chucking out sweets and running through a number of quotes from people who were born today – including Dorothy Parker, John Lee Hooker and Ray Bradbury – by way of song introductions. He is downbeat about the current political landscape, but eschews the expected vitriol of Cunts Are Still Running the World to offer a message of hope and change, before taking an extended break during His 'n' Hers to ask front row punters what they're afraid of and offering tidbits of advice to allay their fears. Elvis Has Left the Building brings the evening to a cohesive close (once Cocker gets his mic stand), leaning back on the rockier style that he has dabbled with since his work with Steve Albini.

It could be seen as a risk to play a 100 minute show that jumps liberally from genre to genre, contains essentially no hits and forgoes every song that made you a household name, but anyone who's doubting the electric genius of Jarvis Cocker at this point is just in plain denial.