Tonight’s sold out Barras crowd clap along in time with a song playing over the PA (which in-between an opening set from the R'n'B-drenched Rosie Lowe and Hot Chip, has been a delightful mix of things like Francis Bebey and Sparks), prematurely getting themselves in a tizzy before tonight’s geek chic superstars are even due onstage. But it’s not long before the lights dim, and an almost unintelligible electronic voice comes to the fore, and when a countdown reaches six, the crowd cotton on to what's happening and join in. FIVE.. FOUR... THREE... TWO... ONE. It feels like we should all be screaming Happy New Year and embracing each other, but we check and it’s definitely still October; it’s just that Hot Chip have arrived.

An early highlight tonight comes during the nothing-short-of-simplistic synchronised dance routine, if you can even call it that, found during their hugely fun rendition of Flutes, from 2012’s In Our Head. During Over and Over, the impatient crowd start the lyrics before the band, hitting the chorus a tad early, and when it does finally kick in they become practically feral; it’s the first time the Barras’ famous sprung floor truly comes into action tonight.

With the largest percentage of the set afforded to their most recent studio album, the exceptional A Bath Full of Ecstasy, the night still manages to feel like something of a ‘Best Of’ show, with all the hits shoehorned in to their non-stop 90-minute set. Still managing to reference numerous influences throughout, a nod is given to Jonathan Richman during Night & Day as Alexis Taylor, dressed tonight like a futuristic jockey, sings ‘I was dancing in the lesbian bar’ during its second half. And ending their main set on Ready for the Floor, the seven-piece segway seamlessly into an exhilarating cover of William Onyeabor’s Good Name. 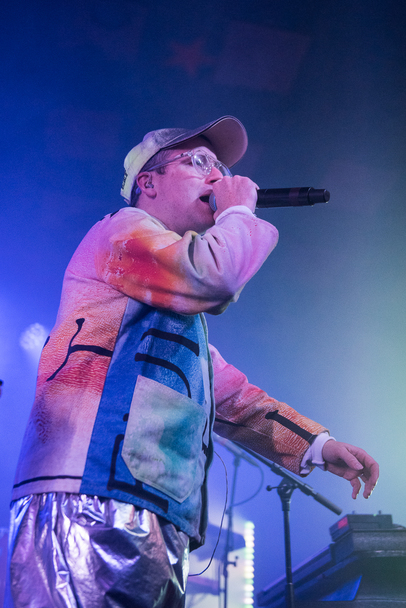 It’s hard to deny the power the older hits have over the crowd compared with some of the newer tracks from A Bath Full of Ecstasy; that the album's title track provokes the biggest lull of the set is a case in point. But tracks like Hungry Child, Spell and Melody of Love really hold their own alongside some of the biggest tracks within their back catalogue.

Leaving the stage post-Ready for the Floor/Good Name, Joe Goddard sets an eerily hypnotic electronic loop which lasts the duration of the interval. As the stage is plunged into darkness, a few dimly lit techs appear to retune and it’s not long before the crowd are clapping along in time with the loop. The band return rejuvenated and start their three-part encore with the very gentle and heartfelt title track from 2008’s Made in the Dark.

But it’s not long before things ramp up again when the band seem to embody the Beastie Boys, delivering an impressive rendition of the New York group's 1994 hit Sabotage. When the opening heavyweight guitar riff and drums kick in, it's clear that carnage is about to ensue, and when Taylor takes two mics, one in each hand, to his face and screams the opening bar: ‘I can’t stand it, I know you planned it’, we enter three-minutes of ear-splittingly, gobsmacking, pure unadulterated joy.

Ending on the comparatively laid-back but still dance-inducing I Feel Better, it’d be hard to feel anything but better after witnessing a Hot Chip Barras show. As we shuffle our way out of the Ballroom, we take one final look over our shoulder to see the seven bandmates excitedly still jumping around onstage like a bunch of school kids, house lights up – it’s a heartwarming ending to a cold October night. Hot chips for everyone.