Even on such unfamiliar terrain, Floating Points can still offer escapism and adventure, but next time let’s get him somewhere with four walls and standing room only

Inside the International Festival’s giant marquee, it’s fair to say that there is a degree of puzzlement amid the anticipation for tonight’s act.

Despite the fact that the whole festival programme was advertised well in advance as seated and spaced out, seeing a DJ without close proximity or even necessarily an audience who are up and dancing is a strange prospect. With an impressive speaker set up that comfortably punches its way to the back of the tent, there’s no shortage of volume but there is definitely a certain frisson missing within the drafty tent.

Sam Shepherd, aka Floating Points, has already gifted the world a truly brilliant album this year in the form of Promises, a nine-part suite that features the London Symphony Orchestra and 80-year-old jazz sax legend Pharoah Sanders, but tonight’s set returns to the ambient and electronic sounds of his previous pair of full-length records 2015’s Elaenia and 2019’s excellent Crush.

Amid a series of harsh tones, a kick drum drops in, Shepherd begins to slowly marshal the impressive array of technology at his fingertips and I realise that I have never felt more alone listening to electronic music. Cool lighting casts the DJ in blues and whites as he moves through the tempos and slowly the audience begin to come to life. 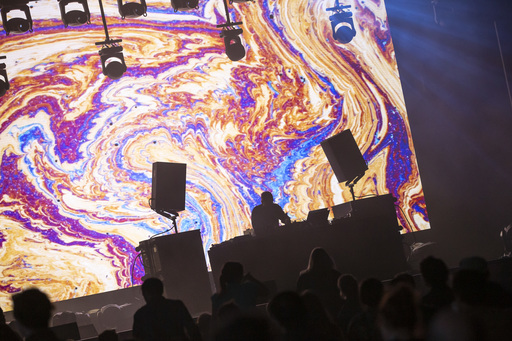 By the time the first bass-driven climax hits with strobes blaring, a quarter of the audience are on their feet and others soon join them. There are no 80-year-old sax players here, just transportative psychedelic synths juxtaposed against the swirling and shifting oil-on-water imagery that formed his Crush album artwork.

The back half of the set moves into more challenging territory, with a track that approaches drum‘n’bass tempos over visuals that resemble a tour of a haunted greenhouse. At times it sounds like three songs are playing at once as Shepherd moves frantically between consoles. Finally, amid the chaos the tempo drops dramatically, huge drums echo, smoke flies and a pulsating house melody emerges in the most purely melodic movement of the night. A cheer erupts and fists rise in the air.

By the time Shepherd brings the night to a close, the frost has thawed and three quarters of the room are on their feet and dancing. It’s testament to his talent that even on such unfamiliar terrain the sounds he conjures can still offer escapism and adventure, but next time let’s get him somewhere with four walls and standing room only.