He's a little slow to start, but the depth of Elvis Costello's talent is evident by the end of the night

Opening up with six or seven songs from the Attractions era, as well as an odd aside about the Grammys' snubs for his erstwhile backing group, it's clear that Elvis Costello recognises his golden period. He starts with hits and they don't stop coming all night; Strict Time, Accidents Will Happen (“the post-Brexit, pre-virus blues”), High Fidelity, From a Whisper to a Scream, the list goes on.

It's something of a shame then that, at times, the mix sounds so garbled tonight. This is especially true of the tinny, hollow drums that swallow up the vocals when Costello's lyrics run a little too fast for his current range. He leans into this problem from time to time, mixing up the vocal melodies (a la Bob Dylan, obviously a major influence), rather than struggle for perfect record imitation, which generally works well.

Slower hits like Watching the Detectives, Good Year for the Roses and Alison fare better, with Costello able to show off the best of his ability atop lush arrangements. His guitar-playing is as strong as ever, as shown on (I Don't Want To Go To) Chelsea, Everyday I Write the Book and Peace, (What's So Funny 'Bout) Peace, Love and Understanding, while Steve Nieve is still a dab hand when it comes to all manner of piano, keys and synth. 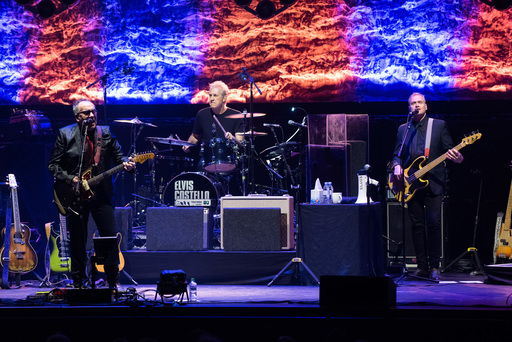 The ever-enthusiastic backing singers, Kitten Kuroi and Briana Lee, are a delight all night, especially on newer songs where the arrangements were made to incorporate their skills (Suspect My Tears, Burnt Sugar Is So Bitter), rather than being shoehorned into old ones. Everyday I Write the Book is a tour-de-force of each band members' talent, with solos being thrown in jam-band style, the most fun song of the night, before Pump It Up closes the main set at an energetic apex.

Opening the encore, Shipbuilding is the real highlight of the night, with Costello at his tenderest; gorgeous lyrics ringing out around the hall and even a brief moment of a capella. Oliver's Army and (What's So Funny 'Bout) Peace, Love and Understanding follow with arresting anti-war visuals to go with the songs' messages of unity. The final 40 minutes tonight really is superlative, helping to paper over the occasionally wobbly first half, and adding further confirmation of Costello as a living legend, but still with plenty to give.