With their ability to channel disparate noise into beautiful order, Domiciles are sure to be seeing bigger stages and longer sets in the future

Sunstinger get things going with a range of atmospheric soundscapes, constructed around repeated layers that build and build. These leads build to ecstatic, cathartic release, especially on the final couple of songs. Sunstinger are like The Horrors if they were moodier and had more facial hair.

It's just the platform for Domiciles to kick on from, opening with a bit of drone noodling before Six Degrees of Separation works through the experimentalism and lets the guitars, bass and drums come to the fore. The set roughly follows their recently-released debut album, This is Not a Zen Garden, which gives it a cohesive flow despite dipping into shoegaze, motorik, psych-rock and even a hint of sludge in some of the breakdowns.

Though the vibe and tempo remain consistent, the middle section of the set sees a wild synth detour. With up to three of them being played at once, Domiciles abandon bass and guitar to create a mesmerising collection of kaleidoscopic loops and gurgles. A surprising difference to their sound live, compared to on record, is the emphasis on electronics and the way those elements hold their own amid the expectedly overpowering washes of drone-gaze that Domiciles so revel in. 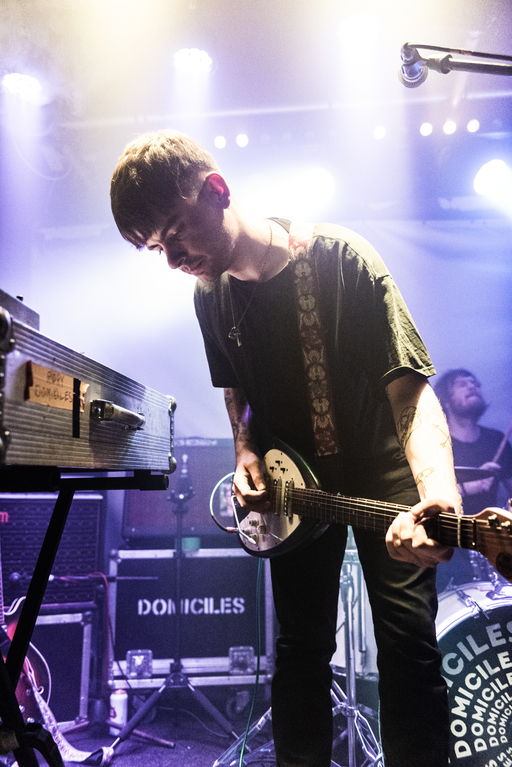 One advantage of the record, though, is being able to occasionally make out the vocals, something that is basically impossible tonight. Although that isn't really a problem as the music speaks for itself when it comes to conveying a mood.

The swirling atmospherics come to a head in the epic finale, The Drug is Not Enough, when all the pent-up guitars, punishing bass and sweeping synths come crashing down in an elegant mess of reverb and delay. At just a scant hour, you feel that more time to bask in these gorgeously constructly pieces would be beneficial. But with their ability to channel disparate noise into beautiful order, Domiciles are sure to be seeing bigger stages and longer sets in the future.