Montreal songwriter Brigitte Naggar, aka Common Holly, returns to The Hug & Pint for Celtic Connections, performing cuts from sublime sophomore record, When I Say To You Black Lightning

A.R. Pinewood will intrigue many a crowd in 2020. A single eye is the only facial feature of his discernible tonight: a cowboy hat and a steampunk mask shield the rest from our gaze. Backed by a band that features eagleowl’s Bart Owl – who will later accompany Faith Eliott onstage – Pinewood modulates his voice to sublime effect throughout his second ever live performance.

Faith Eliott enchants a small yet entirely engrossed gathering with a new song and selected cuts from their debut record Impossible Bodies, joined by Owl on bass for several songs – his hushed, melancholic playing a stirring low-end for Eliott’s restless, delay-tinged fingerpicking to twist and shimmer above. Vulnerable, humorous, filled with clever, disarming metaphors and exquisite imagery – Eliott’s songs engage both our hearts and imaginations to joyous and devastating effect. 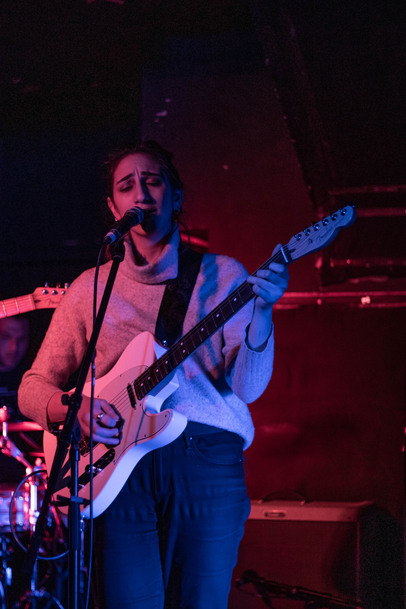 Brigitte Naggar, aka Common Holly, first took to The Hug & Pint stage in 2018, touring beyond her GoldFlakePaint-championed debut Playing House. Tonight, she shares songs from her sophomore release, When I Say To You Black Lightning, accompanied by a three-piece band including Devon Bate, producer of both records. Still a bit of a cherished secret on these shores, Naggar doesn’t quite have the crowd she deserves, but the so-polite-it-becomes-jarring silence that follows each warm burst of applause from her small to medium-sized audience seems fairly in keeping with the Montreal songwriter’s short, tense meditations.

Central Booking is an early highlight of a set that reveals the four as accomplished and adventurous musicians. ‘I am sorry New York broke you… / I think perhaps it woke you’, Naggar sings over clever and creepy guitar lines that twist and turn sharply and suddenly in unexpected directions like a country road at night.

Naggar’s songs are likely to resonate with many feeling a little adrift in their 20s – trying to figure out healthy ways to process their experiences of venturing out into unknown territory. The uncertainty she grapples with in so many of the songs is beautifully and jarringly channelled by the instruments of the four, who only truly let up for the final song of the set. ‘Don’t leave me / I’m crazy, OK?’ Naggar sings on the final track of Black Lightning, an endearing, euphoric exorcism of all the tension built up throughout the set and record. The song begins gentle, tender and hushed, before bursting into life – a low-key, Big Thief-esque bedroom anthem.