I don't remember Chris Frantz ever coming out throwing karate kicks, and David Byrne wasn't one to concoct disagreements with Jerry Harrison for the sake of the show (there were plenty off-stage), but there is a sense that black midi are the heirs apparent to Talking Heads' art-punk throne. They are obsessively anti-melody, against Talking Heads' dedication to the beat, and Geordie Greep's antagonistic weirdness is the antithesis of Byrne's desperate attempts to relate to his audience. Still, they manage to feel like generationally-removed co-conspirators in an elaborate ruse to convince everyone that genre fusion and hipster affectation are the Next. Big. Thing.

This would obviously be annoying as hell if they just didn't sound so damn good. The aircraft hangar-esque EIF dome isn't the ideal place to hear black midi's intense, claustrophobic aural assaults, but the venue doesn't really matter when free jazz climaxes are joined to stream-of-consciousness rambles. Maybe it's the BRIT School finishing touches, but despite a dangerous veneer, black midi never feel close enough to real cacophony to worry anyone. 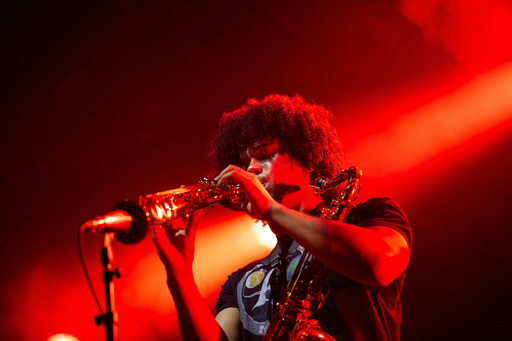 The set is mainly drawn from excellent new album Cavalcade with hits like John L and Slow getting most of the keen audience's claps and stomps, but the nature of black midi's live structure means that there's plenty of room for new or unreleased material like Circus or Sugar/Tzu, as well as unidentifiable saxophone breakdowns, clarinet interludes and drum fills. Greep, in his best American Psycho get-up, haunts the stage as opposed to commanding it, making his presence felt even when he retires to the bass at the side of the stage for three songs to give Cameron Picton a chance to release his inner Jake Bugg.

Greep doesn't really do stage banter, but between his growls, vroooooms and whistles, it's a studied oddness that absolutely works. Morgan Simpson's drumming is also consistently brilliant, keeping everything ticking along smoothly. He's never fazed by Greep's improv nods and is always beautifully in keeping with Kaidi Akinnibi's saxophone skronk-outs and Seth Evans' wild, steely keys (was that the piano interlude from Layla during Dethroned?). 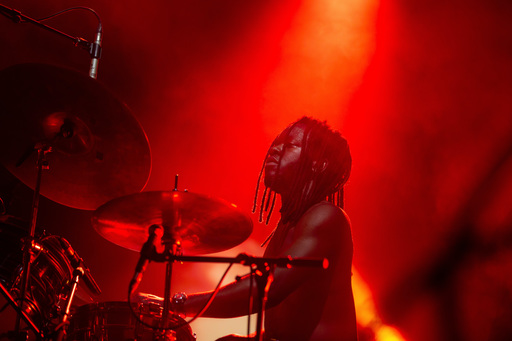 At a little under an hour, with no support or encore, you'd be forgiven for feeling a little short-changed here after Greep dons his Wall Street overcoat and bids “toodle-oo” to the crowd. But this is a band that thrive on unpredictability (even if they do it 200 times a year), and no matter how far-out they appear, there's a solid bedrock of talent at play here that will never put on a bad show, even if it seems to operate on a knife's edge. Not unlike a late-era Talking Heads show.