While Black Lips are a little less wild now than before, they still bring more vibrancy and unpredictability than most

Black Lips have come a long way from the madcap antics – usually involving bodily fluids and stage invasions – that brought them a level of infamy and a list of terrified promoters. Since they learned to really play their instruments, they've been a force of nature. They've taken their inexhaustible energy and channeling it into a range of excellent records that touch on 60s proto-punk, freeform weirdness and their favoured brand of trashy garage-rock'n'roll.

There's a good range of material from the last 15 years in tonight's set, with anything from Arabia Mountain getting a particularly warm welcome (Family Tree, Modern Art, Raw Meat), and the encore's O Katrina! going off in expectedly raucous fashion. Sea of Blasphemy and Dirty Hands from Let It Bloom also hark back to the lo-fi/lowbrow charm of the band's earlier days.

The biggest difference in the group's current iteration is the ceding of songwriting/vocal duties to saxophonist Zumi Rosow and new guitarist Jeff Clarke, especially in the set's second half (and as Jared Swilley gets steadily more wasted). They lead six or seven songs, including two during the encore, that lean into the band's flirtations with country/rockabilly (something that's always had a sartorial presence, if not a musical one). 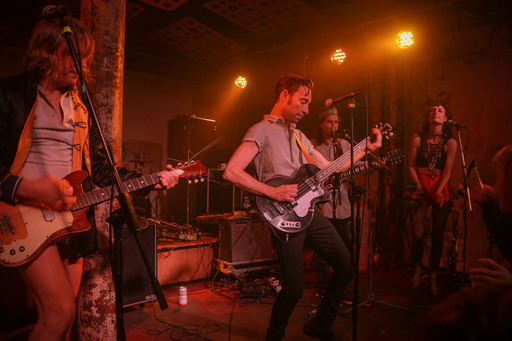 Opening up the group's creative process yields some positive results, but there's a sense of disconnect between Cole Alexander (sporting a fetching kaftan/himachali cap combo) and Swilley's sloppy, breakneck gutter-punk and the considered, plaintive cuts from the new members. Sometimes the elements come together well, like on the melancholy, drunken doo-wop of Crystal Night, but at others it feels like two different bands are playing.

The songs remain uniformly strong and while the band are a little less wild now, they still bring more vibrancy and unpredictability than most, so there's still plenty to enjoy. It will be interesting to see if this is a watershed moment, or if a clearer coherence emerges when they release January's Sing in a World That's Falling Apart.