Magic happens when professional musicians use their immense technical ability to make very silly music. Paddy Steer is very talented. Not many people would be brave enough to do what he does live, but that’s a funny thing to say when half of what he does involves crafting papier-mâché helmets.

In a special performance supporting BEAK> tonight, he’s dressed as some sort of spaceman/crustacean hybrid, with cardboard and sequins dangling off his body while he plays. It’s hard to know where his instruments end and he begins. A vocoder is nestled in-between his thick beard; wire wrapped around his body alongside many other wires connected to a series of amps, taped together as precariously as his costume. He’s playing a drumkit, sample pads and keyboards simultaneously, like an alien one-man band, or a primitive take on a DJ set.

It’s hard to tell if he can see beneath his homemade space helmet, as LED lights flicker right in front of his eyes. You get the feeling he’s intentionally making things difficult for himself, every drum fill a fight against his costume and equipment. Somehow, it all blends perfectly, the wonky rhythms adding to the analog presentation of the music itself. Like the headliner tonight, the music is hard to pin down, living somewhere on the border of electronic music and post punk, if recreated with household supplies and lots of DIY wiring. 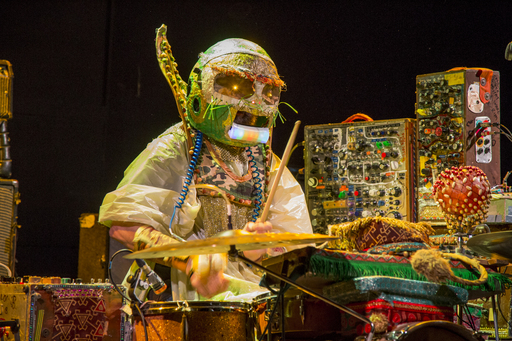 Though harnessing that DIY spirit, it’s in stark contrast to what The Hysterical Injury were conjuring in their support set – a no frills mastering of raw guitar and drums. They sound immense, using their minimalistic set-up to pull a crowd in.

Both are fiercely independent sets, which alone makes them well suited to accompany BEAK>, a band that clearly don’t write or perform for anything other than the joy of it. But there’s another through line tonight, in that all acts use robotic textures and moods to colour wonderfully human performance. BEAK>’s early kraut and psych jam explorations have brought them down a path that now spans three full length albums, the latest of which (humbly titled >>>) is their most studied and expressive simultaneously.

Songs like Brean Down and Eggdog feel richly constructed, their interlocking grooves working like puzzles. But in the live setting, it’s Geoff Barrow’s passionate drum fills, or the searing improvised guitar embellishments that impress the most. The vocals remain despondent, masked by reverb, as if begging us to listen closer and form a connection. 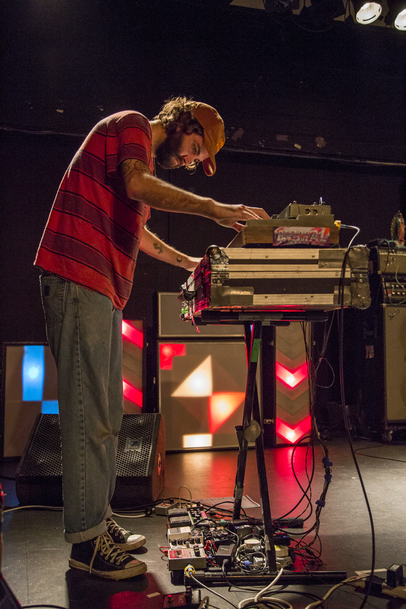 The band mock themselves constantly in between songs. “This is the worst combination of sounds I’ve ever heard,” says Billy Fuller, quoting a YouTube comment under a live performance. You wouldn’t blame someone for not enjoying intentionally queasy and at times atonal music. You get the sense that they’re used to being outsiders. After a decade together, they’ve built up a fanbase that adores them for it.

When they look back to their earliest material like Battery Point or Blagdon Lake, it’s clear just how far this project has come. While those songs always had a special core to them, they feel tighter and more impactful now the band have lived with them for so long. There’s no reason why they can’t become even better if they keep following each other down their singular path.