At its heart, Anna Meredith's music is about fun and exploration, and along with her band, tonight they stick to that ethos at every single turn

“Every society has rituals to cope with life’s more painful realities,” says the Co-Star Astrology app for Libras. Today’s moon transit has shed light on our emotions. It’s a challenging time for us. Right now, this Libra is performing the regular ritual of communal healing through music.

Years ago, people came together in the auditorium at Òran Mór to pray (or cope) using Christian Theology. It was a bit like a trending app of the time, but with more crusades. Now, Alasdair Gray’s gorgeous astrological murals have replaced theology with an equally eccentric system of coping.

Callum Easter stands framed by the building’s stone archways that have been recoloured in neon rainbows. He clutches his accordion like he’s the only thing keeping it from crumbling apart. Despite being stood where a preacher might, looking just as enlightened while gazing into the middle distance, he’s not here to offer many coping mechanisms. His songs are desolate liturgies that feel as though they’re careening towards the void. The lyrics warn of approaching doom and clinging onto hope. He’s probably not on Co-Star.

Easter is a wonderfully intense support act. He captivates with nothing but his voice, a blown-out drum machine, and a distorted accordion bought from a charity shop. Like most of his songs, highlight Here or Nowhere is minimal and despondent, but it has a shot of hope in its stark chorus. Every jagged pop from his equipment seems designed to shake the audience to attention. While it’s a set clouded in fear about his feelings of disorder and lack of purpose in the world, Easter at least comes to the conclusion that we should be miserable together rather than on our own.

The pretty dour subject matter acts as a great inverse to Anna Meredith, whose bright and masterful set finds its purpose in chasing blissed out climaxes and building grooves that lock together like complex equations. Her new album FIBS was one of the pop highlights of last year, remaining utterly catchy and captivating despite its technical construction that turns the beat drop into a clever puzzle as well as a moment of catharsis. Opening track Sawbones is giddy and overwhelming, with chromatic layers of tuba and cello melting into the sour synth layers, constantly shifting focus. It's like the melody is attempting to flee the stage and the band are wrangling it back in. The classical and synthetic sounds they mix is a brand wholly their own. 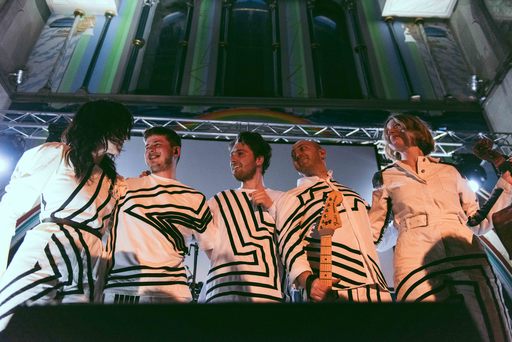 Meredith's music is split between instrumentals that take a musical idea and explore its limits, and nerdy, vocal-led pop bangers that can’t help but cram in left-field approaches. Calion is a particular highlight of the first type. Tense polyrhythms and shifting time signatures are usually something you’d associate with ‘busy’ sounding music, but here, the band manage to mine woozy atmosphere out of parts that must take great focus to nail. They sound natural doing it.

It makes it even more impressive that every member takes the reins on vocals at some point. On Killjoy, drummer Sam Wilson is warm and passionate on the mic, even when balancing his singing with a tricky snare pattern as the song ramps up in intensity. On Something Helpful from 2016’s Varmints, the lead changes four times across each member with Meredith swapping from keys to glockenspiel to vocal via clarinet. She does it with the giddy energy of a kid rooting around in a toy box.

At its heart, this is music about fun and exploration, and Meredith and her band stick to that ethos at every single turn. Especially at the very silly encore, where all formalities break down, and the group take turns doing cover songs that border on Karaoke. It includes Carly Rae Jepsen, an adorably choreographed ABBA duet, and an incredible take on Daniel Beddingfield's Gotta Get Thru This, backed, of course, by a 2-step bass riff on the tuba.

At the beginning of the night, a man with an accordion forced us to face life’s painful realities, and at the end of it, a man with a tuba made us forget them completely.