Without sacrificing the high quality and slick production of his music, Alex Cameron takes a challenging stance on male behaviour and makes it a highly entertaining spectacle

Alex Cameron is looking positively predatory this evening. Sauntering on stage at The Art School in his hypermasculine getup – patterned shirt, wife beater vest, thick leather belt et al – Cameron stares coolly out at the audience. The intensity of his gaze, his greasily slicked-back hair and Garth Marenghi-style glasses would probably make most run for the hills if he was spotted lurking in a bar.

To call his appearance sleazy would be an understatement, but it’s the adoption of this caricature that is at the core of Cameron’s latest album, Miami Memory. The record is filled with nostalgia-inducing synth riffs, audacious vocals and lyrics exploring the type of toxic masculine behaviour that 2016’s #MeToo movement was founded on. But despite the playfully sordid persona that Cameron embodies, there's also an honesty to his latest work that expresses admiration for his partner, actor Jemima Kirke.

Tonight, Cameron marries the two sides of the album in a show that is relentless in its high energy and endearing entertainment value. His performance style is perhaps best described as deliberately disconcerting – all sliding hips and jerky limb convulsions that render an uncanny reworking of the white male ego. It’s a perfect accompaniment to his music, which has been branded as ‘sleaze-pop’ by several critics. Title track Miami Memory, performed tonight with relish, is a particularly pertinent match to this description. At one point during the track, Cameron has the whole crowd crooning lyrics about cunnilingus back to him (‘Eating your ass like an oyster / The way you came like a tsunami’), imagery that sits well with the indulgently smooth production of the track. 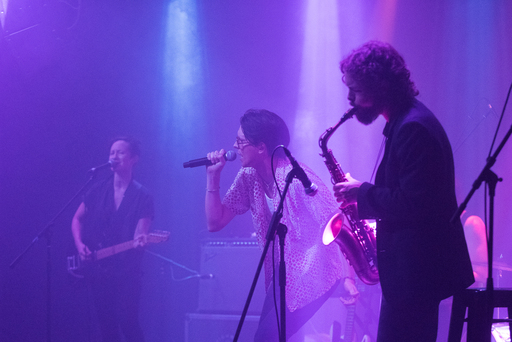 Yet Cameron manages to collate the crudeness of his image tonight with something softer, and in each song there's a reflective tone both in his own behaviour and the attitudes of wider society. His voice is a vital tool in reconciling the two notions – at times reminiscent of reverb-tinged Springsteen (heard strongly on Stepdad), at others channelling Elvis Costello (PC With Me), his powerful vocals ensure the set is emotionally grounded amid camp saxophone riffs and whimsical choreography.

Cameron’s band are also on top form tonight. A particular highlight comes in a break in the set where sax player Roy Molloy takes centre stage to review the stool he's sitting on (solid structure, seamless appearance: 4 stars), and it's clear that the band have a lot of fun together.

Alex Cameron’s performance this evening is an overdue statement on modern masculinity. Without sacrificing the high quality and slick production of his music, he evokes a challenging stance on male behaviour and makes it a highly entertaining spectacle. It’s quite a feat to balance these two elements, but he does it so seamlessly you’re left wondering what exactly you just watched. So here’s to the sleazebag of synth-pop; long may he reign.