We speak to Vessels' Lee J Malcolm and Martin Teff about the group's fourth studio album, The Great Distraction

“Some bands can just kind of get away with... I don’t want to say making the 'same record’, but they’ve got a very distinctive style and parameters that they stick to,” muses Lee J Malcolm, Vessels’ drummer and synth master. “I think for us, it just felt like we’d explored the sort of post-rock/prog-rock thing as much as we thought was necessary. And it was either call it quits, or just try something new." Adding with a laugh, "So we thought, let’s try something new!”

Over the last ten years, Leeds-based five-piece Vessels have steadily pushed the boundaries of their post-rock foundations, with each of their three studio albums edging further into electronica territory. Their fourth LP, The Great Distraction, will be released on 29 September and marks a further evolution for the group, who describe the intent of the record as “aiming to create a living, breathing human version of electronic dance music.”

In another stylistic twist, four out of the ten tracks on the new record feature guest vocals from an impressive group of collaborators. With contributions from John Grant, Vincent Neff (Django Django), Katie Harkin (Sky Larkin / Sleater Kinney), and the one-and-only Wayne Coyne (The Flaming Lips), The Great Distraction is undoubtedly Vessels’ most ambitious effort to date.

“We were dead lucky to get to work with the people that we did,” Malcolm states gratefully. “One song in particular, Deeper In a Sky, I really wanted to work with Katie Harkin, just because her voice is perfect for it, really. We’ve kind of known her for years, because she’s from the Leeds scene, so that came about quite naturally really, she was well up for it.

“Vincent Neff from Django Django was a bit more of a surprise. He was great to work with as well,” Malcolm continues. “And the John Grant one was quite interesting. He sent some vocals in for a different track, and the vocals were so rich and textured and full... it kind of didn’t work with the track that he sung it on. So we wrote an entirely new [song] just to frame what he’s done. It was more about framing his voice, you know, showcasing his voice and giving it a platform. Giving it a lot of space, really,” he laughs.

The collaboration with Coyne, the jittering, cosmic synth-confection Deflect the Light, was premiered online in the run up to the album’s release, with a suitably kooky video accompanying it. Of working with Coyne, Malcolm exclaims that “it was an absolute pleasure, a total surprise as well. He’s been great, he’s been having various text chats with Pete [Wright, fellow Vessels band member], swapping really bizarre photos with each other which has been quite fun!”

Collaborating with The Flaming Lips was particularly meaningful for Vessels, Malcolm agrees, describing how the Lips are a “favourite band” among all of Vessels band members. “They’ve kind of evolved in quite an interesting way, but have always maintained a sound that’s theirs,” says Malcolm of The Flaming Lips' sonic trajectory. “I think we’ve got a lot of respect for that. It was also great that Steven from the band [also] kind of contributed, so it was like very much a Flaming Lips collaboration and not just Wayne singing on it."

While these heavyweight guest appearances certainly imbue The Great Distraction with added prestige, the new album also delivers some of Vessels' best electronic productions to date. Album-opener Mobilise is an instant head-turner; a lengthy, energetic, polyrhythmic track that would not be out of place in a club setting. It sets a clear tone for the rest of the record, which features plenty more dark, dancefloor-focused moments, reflective of the group’s own maturing tastes, says guitarist and bass player Martin Teff.

“I think you can hear that we’ve all gotten a bit older,” he deadpans. “When we were starting out, it was quite fun to make things as complicated as they could be, just because you could. I think over time maybe we’ve kind of got more interested in getting a bit more depth and sometimes things that are just a bit simpler. There are still things that are complicated, but it might be more about layering, or loops and stuff like that, rather than thinking ‘can we play 16 different time signatures in a row?’” he laughs. 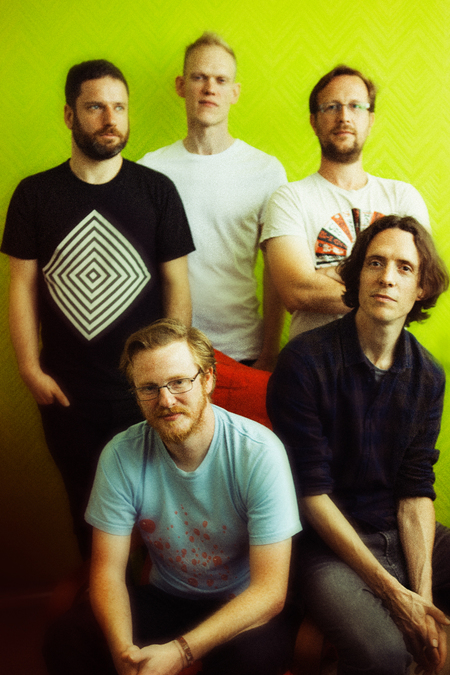 Though Vessels have long been likened to fellow post-rock instrumental outfits such as Explosions in the Sky, Mogwai and Godspeed You! Black Emperor, their house and techno inclinations should come as no surprise. They cite the likes of Jon Hopkins, Daniel Avery, Nils Frahm and James Holden as major influences – back in 2012, they even released a cover of Holden’s classic remix of the Nathan Fake club hit The Sky is Pink.

“One of the binding things in the band is that we all love going out to a decent techno night!” laughs Malcolm. “We’re not so involved in the scene [now], largely just because we’re quite busy a lot of the time. Everyone’s working quite hard, looking after kids... I wish we could go out more! When we play festivals we definitely let our hair down, we try and make the most of that.”

“Although quite a few years ago I spent more time in Leeds clubs, more recently I’ve probably spent more time in clubs in Berlin or London,” adds Teff. “We’ve got a really good friend who is part of the whole Berghain/Panorama Bar thing, so we’ve all spent a fair bit of time in that club. I guess that was probably, in some ways, more influential in recent years than anything in the Leeds scene.”

The Great Distraction certainly marks a confluence of two sonic aesthetics, marrying rock music with an increasing array of synths and electronica. With dance music frequently operating as a separate, segregated entity from other types of live music, how do Vessels select the right venue for their evolving sound, we ask? “It’s always a bit of a surprise when we turn up at a club – I mean, we generally give them warning [about the equipment] – but there’s always that element of when we actually arrive and set it all up and they go, 'Jeeeeesus Christ',” laughs Malcolm.

Teff concurs: “It’s kind of an interesting one, 'cause we’ve had some amazing shows in clubs, but it hasn’t always been a total success. I think sometimes our music goes down best at electronic festivals with a bit of a kind of range of music, [where] it’s not just, you know, like banging techno and house music... I think sometimes people go to nights and all they want is a 4/4 kick drum that’s really pounding them in the face.”

While the pair agree that their best shows have been the product of “the right setting, with the right kind of people with a reasonably open mind”, there’s no doubting that Vessels' live show presents a unique audio-visual spectacle. “I guess the studio album that we produce is kind of one thing, and then often when we come to play it live we end up kind of reinterpreting some of the things we do,” explains Teff. “So it doesn’t necessarily have to be exactly the same as it is on the record, and sometimes it’s more interesting or fun to do different endings or mess with the way parts are divided, and maybe go off on a tangent and do something completely different with it.

“For us it’s always been quite interesting to finish the record and then think about how the live show works, and then actually mess a bit with it and do things slightly differently,” he concludes. “And then I guess you get the record at home, and then you get quite a different experience when you come and see the live show.”

Whatever the setting, Vessels' new album is sure to prove a more than welcome distraction.

The Great Distraction is out on 29 Sep via Different Recordings
Vessels play The Art School, Glasgow, 7 Oct – tickets here