Ahead of her biggest UK tour in November, we talk to Sigrid about dropping out of college, working hard and staying grounded

“I’m a college dropout!” Sigrid Solbakk Raabe (known mononymously as indie-pop singer Sigrid) exclaims, somewhat bemused that she’s been chosen as the cover star for The Skinny’s student guide. However, while she’s not been through the multi-year slog of coursework and last minute library sessions – it was only a few weeks into a Comparative Politics degree that she decided to devote herself to music – she’s certainly someone that any fresher, or any young person for that matter, could learn a thing or two from.

A fresh-faced 22-year-old, music journalists have been keen to stress her youth, painting her as some kind of Nordic ingénue plucked from obscurity. Yet, even over the course of our conversation, it’s clear that this narrative misses the mark. Yes, she’s remarkably young for what she’s achieved – she already has a debut album, a slew of charting singles and the BBC Music Sound of 2018 title under her belt – but there’s nothing wide-eyed about her.

Perfectly courteous, with each statement from her mouth seeming so carefully considered and unabashedly serious, she’s professional to a fault – even when peppering her sentences with stateside slang or declaring her unbridled enthusiasm for Tame Impala. Initially it’s easy to think she has her guard up, that no 20-something is this together, but she assures us her personality has always been marked by precocity. “I’ve always been one of those kids who try to be a bit more grown up than they are,” she admits, with a laugh. However, she’s not shy to admit that music, and the various skills she was forced to develop as a DIY artist, was a crash course in the dark arts of “adulting”. “I was still in high school – I was only 16 – when I started to talk to labels,” she says. “I was sort of running my own music career. That was my introduction to email!”

Her journey, from first gaining attention in her native Norway to blowing up internationally with the slow-burn hit Don’t Kill My Vibe – a slice of zeitgeisty, empowered pop released at just the right time – to now embarking on her biggest ever tour across Europe and the US, it started in her teens and has taken her into her 20s. The emotional intensity of these years, when it can feel like your life is brimming with potential one minute and careening towards disaster the next, is tough for everyone, so it’s hard to imagine managing that while simultaneously forging a career in the limelight.

Yet Sigrid, in her own words, is “doing pretty well” – though she admits it’s not always plain sailing. “I’m 22 and you’re still figuring out stuff [at that age] so it’s strange that everything [I do] is on display if anyone wants to know. But maybe that’s what makes it really exciting too.” Her concerns, however, don’t seem too different from your average Gen Zer reared in a digital age where, thanks to social media, each life moment is searchable at the click of a button. She seems relatively unfazed at being in the business of playing festival main stages (at the time of our conversation, she’s fresh from a top-billed gig at Oslo’s Øya Festival) or touring globally. “In some ways you get used to the thought of people listening to your music from across the world,” she says, though there are some moments when things do still feel a bit surreal; “in other ways it still kind of blows my mind.”

What, then, has she learned from what’s admittedly quite a unique experience (even if she seems keen to downplay its significance)? “I think I’ve just grown more and more secure with who I am and what I want,” she says, after taking a moment to consider our question. “Obviously I still have doubts sometimes of what to do and how to do things but I still come back to my gut feeling.” We're struck at the easy confidence Sigrid has in her abilities and the faith she has in her own intuition. For most people, this self-assuredness only comes much later in life, after years of looking to others to work out who we should be.

It seems that she’s not found success to be a distraction from remaining in touch with her “authentic” self – quite the opposite, in fact. However she’s not overly attached to the person she once was and, rather, is keen to embrace the change and growth that comes with growing up, regardless of what your chosen career is. “Obviously I’m going to change a little bit because that’s what happens when you grow older: whether it’s studying or working, any experience will change you in some way, and I think that’s cool and exciting.”

Yet, on the other hand, it does seem like she’s managed to remain remarkably grounded. She tells us she still has the same hobbies she did as a teenager and that she still loves “going back [home] to see my family and hang out with my friends.” It’s by keeping such strong ties with who she was in her pre-fame years that Sigrid, the 20-something still figuring things out, and Sigrid, the pop star on the rise, seem to coexist so peacefully. She shrugs it off, saying: “I just try and suck in all the incredible moments I get to see or do. It’s a good mix of incredible things that happen with my job and normal things that I still like to do.”

It’s amazing to think that someone like Sigrid, whose down-to-earth demeanour makes her seem like anyone you could have been friends with in high school, had the vision and the tenacity to pursue her ambitions – particularly when so many of us shy away from doing the same in our own lives. While she acknowledges her success caught her off guard, she does believe in the power of working out what you’re passionate about and following it through. “Eurgh this is going to be cheesy,” she says, audibly wincing down the phone, “but my perspective on life has dramatically changed. I never thought I was going to do anything as crazy as to actually work full-time as a musician.

“When I started writing [music] I heard there was some international potential in the songs… but to go from ‘potential’ to the actual reality of touring the world, well, I didn’t think that was going to happen.” It was after a move from her hometown of Alesund to Bergen, where she became invested in promoting herself on the local scene, that things really fell into place. It’s then that she stopped thinking about who she wanted to be in the future and really took stock of what mattered to her in the present. “I wanted to be so many things, but I figured out that music is the only thing that I really want to do.”

However, with alarming candour, she explains that she doesn’t necessarily buy into the idea that “if you work at something you love, you never work a day in your life.” She might be doing what she loves but she doesn’t for a minute suggest that it feels like she isn't working. “Sometimes my job is meetings and emails and budgets and contracts. It’s not just going onstage, playing a song and going to a party afterwards. That’s just not how it works at all – there’s a lot more than that.”

In a world where side hustles have not only become the norm, but where a state of “never-not-working” has become something of a skewed status symbol, it’s oddly refreshing to hear Sigrid being so open about the more mundane side of her working life. Perhaps that’s why she’s never allowed her personality, or her values, to be eaten up by her appetite for success.

At the end of the day, she knows that she’s so much more than what she does for a living and refuses to be defined by her career. “Even if you go for something you love, everything is a job sometimes,” she says – a simple lesson that we should all take to heart.

On being taken seriously as a young person:
"I can’t say that it’s always been easy being the youngest one but usually I feel very respected and it always goes back to the fact that I’m the artist. I’m the one that’s on the poster for everything – I’m the boss of my own career so I need to love everything I do because I’m going to promote it.”

On giving things your all:
“My luxury problem in school was that I didn’t know what I should be most focused on – it was kind of halfway school, halfway music. I was supposed to play some really cool gigs in Norway in my last year of school but I cancelled them. I wanted to go to these shows and really kill it if I was going to do it, so I took a year off music to focus on my grades.”

On working in music, even if you’re not musically inclined:
“Maybe you don’t play an instrument but you want to work in the music industry. I had no idea the music industry existed before I was in it, I didn’t even know what a label was. When you start figuring out all these things [that make up the industry] it’s incredible how many things you can do.”

On doing what you love:
“There are so many opportunities our generation has now. I think it’s important to work for something you have a passion for – it’s a real privilege.” 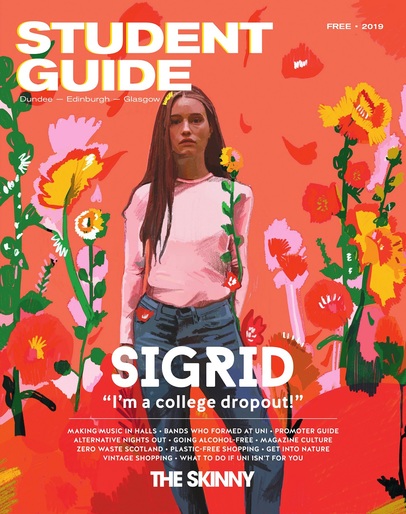