With his LŪP album picked up by One Little Independent Records for a physical release, we learn more about Lomond Campbell's intricate tape looping machine

“I've not only got machines for pals!” Lomond Campbell says this laughing, surrounded by gear and equipment, and after an hour of expounding on his latest experiment-turned-minor musical hit where his only “bandmate” is a machine he invented.

This is the point where you read the '[insert title plus genres working in]' section of a musical profile, but Campbell is virtually impossible to pigeonhole. On his Bandcamp page, he’s described as an 'artificer', a handy term to sum up the multifaceted nature of his work, which encompasses sound, recording, avant garde art, installation, engineering, mechanics, science, study, lecture, crafts, a bit of DIY and a whole lot of innovation.

Campbell is based in his own studio in the Highlands called The Lengths where he hammers away at projects, makes his own music using the very tools and machines he creates, and records and produces others. On paper, his set up and output says hermitic mad scientist in his lab; in person, he is a deeply knowledgeable and driven artist, uncomfortable with sitting still and enthusiastic to explain the intricacies of his work, even if it would make the brain cogs of a layperson short circuit.

His latest record, LŪP, has become perhaps his most noticed after catching the ear of Mary Anne Hobbs and being featured on her BBC 6Music show. The album is a collection of disparate electronic compositions. What binds them is their common origin: a machine called LŪP, inspired by a brief given to Campbell by friend King Creosote.

“He asked me to build some kind of unique instrument that played tape loops,” Campbell says. “When the pandemic came along, that offered the time to work on it, and because it was a vague and wide open idea, I started by thinking about what such an instrument could do.”

Campbell was influenced by the major figures whose work made tape looping and phase experimentation well known: William Basinski and Steve Reich respectively. “I went to the obvious starting points and looked at their core concepts,” he explains. “The big hitters with their big ideas – I took that, and just tried to imbue it into a machine.”

At this point, Campbell exits the frame and returns with LŪP itself: a board containing gears and straps, and an empty cassette casing that allows tape – taken from old songs, demos, any recorded material really – to be cut and fed and looped and changed for 601 millimetres, or ten seconds of audio at standard rate. Neodymium magnets disintegrate the tape as it processes. That degradation “gives it an element of disruption and grubbies up the sound to colour it.” At the same time, the sound being captured slowly phases, or moves out of sync, “and you get interesting musical textures that almost sound like the work, but not quite. It's not chaos, it's not totally random, it's just drifting in and out, and you can sort of make sense of it for a second, and then you lose your way and become disoriented.”

Complicated, right? “It was kind of a simple idea in theory. It took quite a long time to build, but the basic idea was really obvious to me: take those massive concepts, and just make one thing that can do it all,” says Campbell.

The music that makes up LŪP came about spontaneously, mainly due to seeing if it even worked. “I was thinking product. That's all it was, product design,” he says. “But obviously I had to test it, calibrate it, play with it, see what it felt like, if it’s useable. I hooked it up to a portable sampler and was trying things out. It became addictive. I liked what I was hearing. I thought, let's document this to see how it's evolving.” 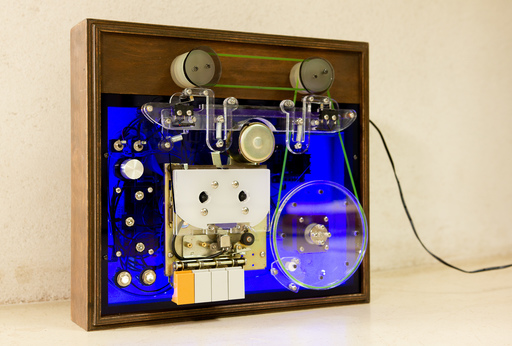 Campbell works mainly alone, by usual musical standards. But the centering of the LŪP machine, almost an entity unto itself, makes this, Campbell says, a collaboration. “This machine has different quirks, and this one over here [pointing behind him], and each of these little modules, they've all got their own behaviours, the same way a person does, and you will respond to that, you will interact differently. If I set certain equipment up a certain way, I know I'm going to compose, write, respond totally differently. With LŪP, because of idiosyncrasies built into it, it's as much the machine as it is me, if not more so.”

Off the back of a limited cassette run, LŪP is now receiving a wider release. Campbell has also signed a multi-project deal with label One Little Independent which will allow him the freedom to see other unique projects come to fruition. He will build a run of LŪP machines for other artists to use, allowing him to play around with the scope of what the equipment could achieve. “I’m kind of excited about it because I don't really know what's going to happen,” he says.

The act of creativity is often difficult to describe. By comparison, the scientific way in which Campbell outlines LŪP is methodical, grounded as it is in physics, and yet somehow remains instilled with that intangible quality of the unknown. Let’s call it magic.

LŪP is released on 22 Oct via One Little Independent Records
lomondcampbell.bandcamp.com