Kathleen Hanna at 50: How girls to the front galvanised a new generation of riot grrrls

As riot grrrl pioneer Kathleen Hanna turns 50 this month, we look back on her career and the legacy she's left to a new generation of music-making women

From the gut-busting smacks of the snare to the militant chugging-riff building headfirst into Kathleen Hanna’s caustic cry, Bikini Kill's Rebel Girl was an ode to female friendship. Nearly 30 years on, and as the punk singer turns 50 this month, it's time to look back on the iconoclastic career of the original riot grrrl and the legacy she’s left to a new generation of music-making women.

Allison Wolfe has just got back from an afternoon rehearsing with new project, Scorpio Scorpio – a pop trio alongside 70s archivist and activist Alice Bag, and Hunx and His Punx vocalist Seth Bogart. Over the crackle of the phone wires, she’s casting her mind back to the first time she met Kathleen Hanna back home in Olympia, Washington. "I remember seeing her around. She had a shaved head and looked like Tank Girl or something," Wolfe remembers with a laugh. "She always sort of terrified me, I would think 'Oh, here comes that tough girl.'"

And it’s true. For some, the foul-mouthed, red-faced anger of the lightning rod lead singer may have seemed confrontational but for Wolfe, frontwoman of fellow riot grrrl frontrunners Bratmobile, this was the first wave of a monumental sea change. She remembers stumbling into what she thinks was a Bikini Kill rehearsal walking past Olympia’s indie art gallery, Reko Muse. "If it was a show then there weren’t many people there... maybe a handful," she jokes.

The group brought together Hanna on vocals, Tobi Vail (founder of feminist zine Jigsaw) on drums, guitarist Billy Karren and bassist Kathi Wilcox who would stick with Hanna right through to recent musical carnation, The Julie Ruin. Armed with a mission to carve a space for women in a world that saw them as groupies rather than musicians, Bikini Kill’s ideology still speaks to countless women creatives today. "In the first week of the guitar and bass classes, we ask the women and girls which musician they've been most inspired by and the most common answer is Kathleen Hanna," explains Caro Kemp, Co-chair of Girls Rock School Edinburgh.

Much like the band’s 'Revolution Girl Style Now' ethos to create a safe space for women and girls at music concerts – particularly punk shows dominated by violent mosh pits – Girls Rock School Edinburgh’s inception was inspired by the US Rock Camp for Girls, building women and girl’s self-esteem through music creation and performance. "There's a ridiculous and outdated system which tries to make women feel like they're not supposed to do certain things," Kemp tells us, "and not just young women, but also older women, transgender people, ethnic minorities and people who are differently abled." 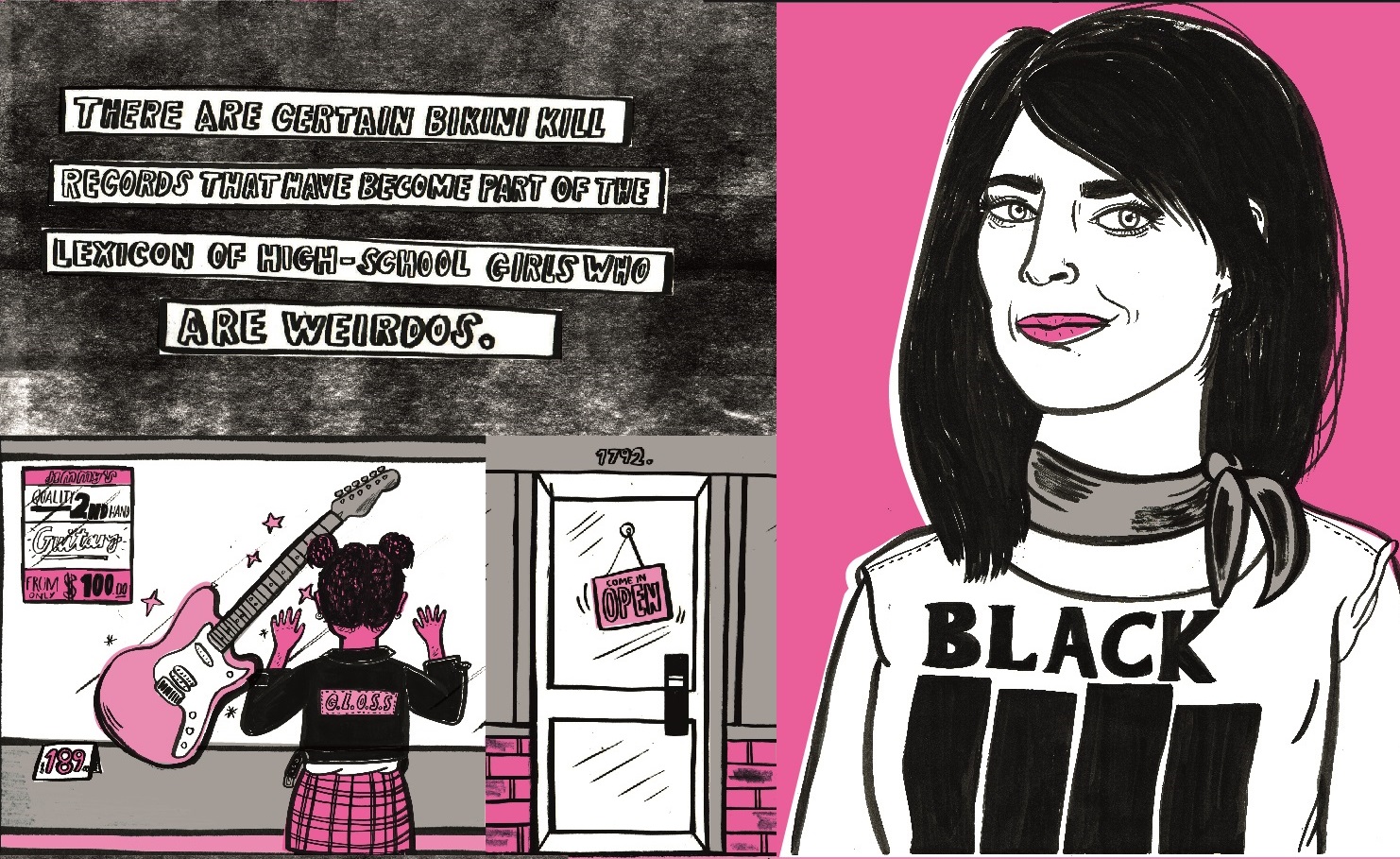 Away from the brash gig politics and masculine punk culture, there was a more sensitive side to Bikini Kill’s shows that unified those who felt outcast and alone. Hanna's influence can be felt within everything from best-selling book Good Night Stories for Rebel Girls to the pockets of socially awkward teens in isolated communities across the globe. As Hanna herself told The Guardian in 2014 ahead of The Julie Ruin’s return to the UK: "There are certain Bikini Kill records that have become part of the lexicon of high-school girls who are weirdos."

Not just "high-school girls" though. Gareth David, vocalist of seven-strong indie-pop outfit Los Campesinos!, hugely identifies with the punk singer who provided a welcome disruption to an otherwise samey scene. "Growing up in a small town in Somerset, and being wilfully alternative but without an older sibling or mentor to guide me through my early teens, my exposure to music was primarily just through white males with guitars," David tells us. Given Hanna's own disruptive childhood – her family never stayed long in one place due to her father's job constantly uprooting them – it makes sense that she's given fellow teens a sense of belonging, even in the smallest of rural towns.

This collectivity continued with the ‘girls to the front’ ideology that Hanna championed so vehemently. Its ethos has been instrumental in reshaping how women are perceived within the music industry; be that as keen front row fans or fret-heavy guitarists. For David, it sparked a conscious decision towards female representation. "We have a policy that we will not choose support bands which are made up solely of males. We’re aware that as a band that is six-sevenths male, we have a duty to hold ourselves to account."

It’s this sort of accountability that’s so needed in a post #MeToo era where far too often men’s views and opinions are lionised. Hanna herself once said, "You're still going to get criticised, so you might as well do whatever the fuck you want," and it seems this new generation are rallying around this idea. Jude Stewart, Chair of Girls Rock Glasgow, explains how their rock camps provide spaces that address this. "[The woman and girls attending] can be free to express their frustrations and be goofy – experiment without being scrutinised and judged according to some ‘industry vision’ of what female success is. They can enjoy sisterhood and not be eaten up by competition."

It’s similar to something that Wolfe also believes Hanna kickstarted back during the birth of her first band nearly 30 years ago. "It was really new for women coming together, not competing against one another, and I don’t think that had happened before," she admits emphatically. "Things seemed to change really quickly and Bikini Kill were definitely at the epicentre of that. They really galvanised people."

It seems over three decades on, Hanna's role as the flagship riot grrrl is still as relevant as ever, particularly when it comes to accessibility. Something of a leftover from their fore-sisters in the 70s, riot grrrl proved that you can explore music even if you can’t afford the after-school hours tutelage. Bratakus – sisters Onnagh (bass/vocals) and Breagha Cuinn (guitar/vocals) – are the poster pair to come out of Girls Rock Glasgow and since picking up their instruments through the camp have volunteered for the not-for-profit for the last four years.

"One of the best parts about what the riot grrrl movement did was let girls know they didn't have to be a grade eight musician to form an amazing band," Breagha explains. "Girls felt they could just get up and try stuff out, and that was a really important thing to happen." Wolfe agrees and similarly puts a lot of that on the Girls Rock camps as well as her and her riot grrrl alumni: "These days a lot of women and girls don’t consider it weird or whatever to start a band. A lot of that is to do with the Girls Rock camps. They’re really bringing up this new generation of musicians who aren’t going to think twice about starting a band."

Kathleen Hanna was more than just a punk singer. For so many of us, she was a therapist, a mentor, a crutch to lean on when things got tough. But she was also a changemaker transforming the attitudes and assumptions around what women stood for. For bands like Bratakus, Breagha tells us they’re taking that mantle and running with it: "We get people saying all the time, 'I didn't expect such loud aggressive music from two little girls like you.'"

Hanna reasoned in a recent article that she doesn’t say ‘girls to the front’ anymore because “they’re already there” and with initiatives like Girls Rock Glasgow and Edinburgh carving out a safe space for girls and women to stand up and make noise, you can’t help but feel there’s more on the way: revolution girl style now. Girls Rock Edinburgh’s Kemp has the last word on that: "We're not gonna be the cute girl playing keyboards in the indie rock boy band anymore, and we're not sorry."