Rule of Three: Ben Corrigan on the Excuse the Mess podcast

Ahead of releasing a stunning collection of music created as part of his Excuse the Mess podcast, we speak to composer and podcast creator Ben Corrigan

What if you could create a piece of music with one of your favourite musicians, but there are rules and limitations you have to stick to: no part of the music can be predetermined, you can only use one instrument or item to create that piece of music (electronic manipulation is allowed, however) and you only have one day to complete it. Sounds mad, right? But it’s a major component of composer Ben Corrigan’s award-winning Excuse the Mess podcast, which has now seen him collaborate with 17 of his favourite musicians and composers.

The first episode of the podcast aired in September 2017 featuring Austrian hang (handpan) player Manu Delago, who produced Anoushka Shankar’s 2016 album Land of Gold and has worked and toured extensively with Björk. An impressive first get. Following a 'getting to know you'-style discussion between Corrigan and Delago, the pair then set to work on creating a piece of music together, and you get to hear the process as part of the podcast before the composition is played in full.

Since that first episode, Corrigan has had everyone from Gold Panda and Hannah Peel to Oliver Coates and Anna Meredith as guests, and while a lot of artists chose to use instruments they’re used to working with, there are some unusual choices to be found too such as an ice rink (Mira Calix) and a pesto jar (Meredith) – sun-dried tomato in case you were wondering. This February, all 17 tracks created via the podcast are getting a two-part digital release with beautiful accompanying limited edition books, so we catch up with Corrigan over Zoom to find out more.

The Skinny: Can you give us a bit of background on yourself for our readers who might not be familiar with you and your podcast?
Ben Corrigan: I am originally from Carlisle... I listened to metal and played in a metal band, I didn't grow up classically trained. But I ended up getting into film music and from there got really into classical music... I rustled up a portfolio and got a place at Trinity Laban to do composition. I didn't really have a clue about electronic music and there was an Introduction to Logic Pro class, and that became the thing I wanted to pursue the most.

I finished my course and spent a while assisting various people and composers and doing sound engineering. I did a stint for [film composer] Patrick Doyle, and Anoushka Shankar, as her engineer. I was basically helping other people and thought it would be nice to have my own thing.

I first got into podcasts because I was a Jonny Greenwood fan and he was doing an interview with Adam Buxton. I listened to that, loved it and really liked his style of podcasting. Then I listened to an Oliver Coates album where most of the sounds were made out of just a cello and warpings of cello. A few other factors brought together this whole concept... like Fact magazine's Against the Clock, that idea of quite a time pressured [scenario to] create something from scratch... The other limitation was no pre-planning, so it feels very spontaneous.

How did you turn the idea into a reality?
I tentatively knew a few composers and there's people who were friends from uni; these people are busy, you know, they've probably got a waiting list of people wanting to make music with them. But I was thinking, how can I essentially lure them into a room to make a piece of music, people that I admire, and make it so that it doesn't feel too committed? [I said] we'll talk about you and your music, that's like a bit of promo, and then this idea of a very low stakes, music writing session, don't worry if it comes out crap at the end. Hence the name – Excuse the Mess. I kind of see my podcast as a reverse engineered Song Exploder.

Was it hard convincing people to get involved?
Some people were admittedly difficult... Anna [Meredith], for example, she was supposed to be in the first series; it was great to get Anna in the second series. I'm also kind of amazed at the willingness in some ways. I would be terrified to do my podcast from the other side... I try to make the artist feel really comfortable, and it helps that I do either know them or have a tenuous link to them, a friend of a friend, that kind of thing.

Everybody sounds surprisingly calm during the process. Was it actually like that or was that just clever editing?
I've done some edit wonders in the past, but you kind of picked up on something there that I hadn't really thought about. There is a lack of frantic pressure and stress even though it is really fast working, committing to ideas, trying to generate something stomachable... They're all kind of harmonious little writing sessions. I guess to have the conversation first puts people at ease, they're comfortable, I put shit loads of snacks out. People seem to really dig the snacks, it's almost the thing they remember the most.

I need to know about these snacks.
There's these great crisps, like posh crisps, called Eaten Path, they're balsamic vinegar and made out of bean and pea. They've got a lovely crisp to them. They're not too greasy but they're really moreish.

You should use them as the 'item' for your next track.
I like the idea of doing non-instrument instruments, like the pesto jar with Anna. I find them to be almost more exciting. But yeah, biscuits, biscuits, biscuits, lots of biscuits, tea, coffee, cakes, and then a bit of fruit... usually a grape.

Snacks aside, do you have a favourite finished track?
There's one that's really sweet and short and quite transportative from the first series with Mark Lockheart, a floaty saxophone thing. But I can't really say if there's a favourite, I get a rush off each writing session and the fun of the day really.

From Delago's hypnotic Collider and Mira Calix's glitchy Skating on Thin Ice to Gold Panda's vinyl sampling on Lanza and Meredith's hyperactive Oopsloops, as a collection of music, the Excuse the Mess compilations are remarkably cohesive. What was it like for you experiencing and working with everyone's different processes?
It's amazing for me... I get a masterclass and I get to sit in the room with someone who's an absolute beast at what they do, and then get to share that. The beauty of the rules is that it can really focus us and stop us being too distracted and then you get quite a pure essence of the way they work and the way their mind works.

What was it like experiencing the Meredith map?
Definitely a highlight. That's a great example of someone who's really found not only their voice but the process behind that voice as well. Some people have these almost routines like Anna and some people, they maybe have an instinct that leads them towards their sound... An example is Mira Calix's one. Quite quickly it started sounding like a Mira Calix tune, it was very choppy uppy... Everyone seems to have this little relationship with chaos where they can generate things... Mira's was just hacking at bits of audio and poking buttons.

Did you find it hard sticking to your three rules?
Yeah, there's a few cheaty bits. For example, Hannah Peel was just like, 'Aw, it would be great to do some singing on this', and I was like, I can't say no to Hannah Peel! 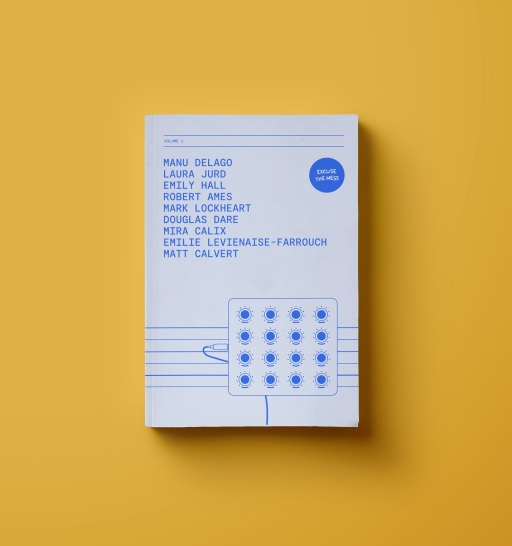 The two digital compilation albums and limited edition books are out this month, was this always the end goal?
Not at all. I thought I was just gonna quietly release them on Bandcamp. I did quietly release [volume one] to not much fanfare at the end of that series, but then for various reasons, COVID included, I've just been sitting on two complete series and luckily in the last year-and-a-half Hidden Note have had time to be thinking about their record label and what they want to do. They [suggested the] coffee table books... it's a nice way to put a very digital project into the physical world.

What can people get out of the books that they won’t get from the podcast or the music?
Without retracing my steps, I’ve talked a little bit about each artist and the day, things that still resonate with me now. Hopefully people that like the podcast can flick through it and maybe discover some of the artists, get a sense of them, a sense of the day, a sense of the music. I see the book as CD liner notes on steroids, a beautifully made accompaniment for the music and the podcast.

The podcast stopped almost as soon as the pandemic started. Is there a plan for a third series?
I think so, yeah. I've got a wishlist and at some point I'm gonna start making the gears turn again. It'd be nice to try and do some new things, I'd like to work with more electronic artists.

In keeping with this issue’s fantasy theme, who would your dream collaboration be, dead or alive?
The whole 'alive or dead' makes it even more difficult, you know I like limitations! I think Ryuichi Sakamoto would be good, I've been really getting into Yellow Magic Orchestra. I'm also really into this band CHAI, they're amazing.

I do have a sort of fantasy with the podcast actually, to do a travelling one. It's a bit of an obvious choice, but I’d do an American series and I could do, you know, a couple of podcasts in various cities and that's the series, and it could almost be a sort of travel blog as well. I think the podcast would have to get more famous first. It's got a very niche audience, I would say.

Excuse the Mess volumes one and two, along with accompanying books, are released on 4 Feb via Hidden Note Records