Why houseplants mean so much to millennials

Millennials are buying more houseplants than any other generation. This self-identifying plant lover reflects on her – and her generation’s – obsession with indoor jungles

An accumulation of concrete, high-rises and an all-consuming digital world have combined to distance us from the natural world, with the climate crisis accelerating our planet to a point of no return. In response, the NHS offer 'nature prescriptions,' urging citizens to seek out green spaces proven to improve our mental and physical health. Perhaps unsurprisingly, the Royal Horticultural Society found that four in five 16-24 year olds own a houseplant, along with three-quarters of the British population on the whole. The proliferation of leafy butterfly palms and Swiss cheese plants now adorning many of our windows is being served up as yet another token millennial habit, but is there more to our growing fascination with foliage?

For me, there is certainly more to my love of houseplants than meets the social media-immersed eye. I would be lying if I didn’t confess that my plant obsession was propelled with the discovery of Instagram accounts like Philomemedron, Jamie’s Jungle and Botany Geek. Rarely will I stan an algorithm, but at a time when I retreated from the world around me and watched messages, notifications and missed calls compile on my phone screen, Instagram presented me with the glistening gardens of the global village.

Yet, unlike the well-lit London flats that dripped in exotic plants from ceiling to floor that I could never hope to afford, crumbling, single-glazed tenements have become second-nature to me. My adult years stretched across Scotland’s Central Belt are strung together by memories of the many times I’ve cried, chain-smoked, cackled and spilled cans out of their grimy windows overlooking busy city streets. Those of us who go through the stress and strain of finding an affordable flat amid rising rent prices must reckon with an increasingly troubled sense of home – losing sight of where this actually is, or whether it even exists, with each chaotic relocation. 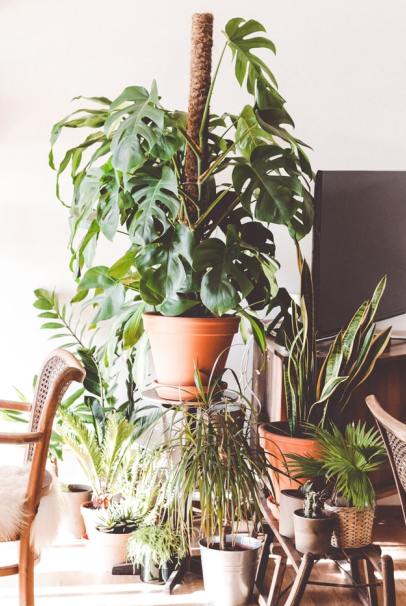 Photo by Brina Blum on Unsplash

The many houseplants I’ve hoarded over the last few years have provided a sense of home, and indeed self, which faded from my field of vision as my punishing perfectionism eventually caved to depression and trichotillomania while studying. Under the umbrella of Body-Focused Repetitive Behaviours (BFRBs), trichotillomania is a frighteningly literal translation to the idea of 'pulling your hair out' over something. It has been so trivialised in popular culture, and dismissed as a real disorder, that I didn’t notice it build in intensity until it became impossible to ignore. My hands proved increasingly incapable of resisting the urge to pull and snap my hair, strand by strand.

My love of writing no longer materialised in words on a page but instead manifested itself in heaps of hair scattered across my desk signifying failure. Soon, I found that leaving my flat only to feel completely lost and unanchored from the wider world confirmed, to me, that I was unfit for living, too weak to reconnect with the outside and too worthless to warrant being alive. My penultimate year of university was marked by an extreme sadness, disillusionment and suicidal ideation as these illnesses took over.

Turning to houseplants forced a welcome rupture from my isolation. Their demands for water, light and love slowly overtook those of my depression urging me to give into dissociation. Their hardiness and perseverance declared itself immune to the draughts blowing through the permanent gaps in my window-frames. Their fragility and diversity would steadily and tantalisingly reveal itself in the unfurling of new leaves. Fingers previously hell-bent on pulling out hairs instead found solace getting entangled in the dangling stems of philodendrons.

When I tell people that I own near 100 houseplants, the response is understandably mixed. But I’m never surprised when people respond to my explanation for my slightly out-of-hand obsession with stories of their own; about how they, too, have found more worth in plants than them looking great on the ‘gram. Some struggling with bereavement, seasonal affective disorder, anxiety or related mental health issues have likewise celebrated houseplants for their ability to bring the outside in, having felt encouraged by their presence to explore their local parks, gardens and glasshouses.

My hoard of houseplants will always be my home, moving with me wherever I go, precariously piled into Ikea bags and carried up endless flights of stairs. It’s maybe excessive to own as many as I do, but each plant recalls a moment of getting better, feeling worse and the varied, uneven steps taken to recovering from an all-consuming mental illness that threatens to take your life away. While undeniably #aesthetic and beautiful, there is more to be said for our blossoming interest in houseplants. Their presence represents our collective hopes to make somewhere temporary, and often stressfully obtained, feel homelier and happier. Watching something thrive and survive, gradually and rarely smoothly, helped me want to live again, and to embrace a metaphor of growth and self-acceptance which, despite its obviousness, has been nonetheless inspiring.