In the social media age, films are no longer confined to being two-hour experiences. Along with fans dissecting every element of a movie, and promotional material which makes us critical of material before it’s even released, the films themselves are now fragmented across the internet through clips and stills on sites like Twitter and Tumblr, where they take on different significance.

Case in point: Studio Ghibli, which now feels as much an aesthetic as an animation company. Scrolling through your feed, it isn’t uncommon to see a compilation of the most appealing food in each film, or a photoset of the painted flowers that litter the backdrops of most of the studio’s movies. This used to be confined to the accounts of fans of the studio or anime in general, but recently, these posts and this aesthetic has come into vogue, because of a particular internet trend that values exactly the atmosphere Ghibli seeks to create.

Enter cottagecore, an internet movement that values the pastoral, the traditional, and the natural: wearing knitted cardigans, growing daffodils, making pastries, and doing all of the above in some kind of forest cottage. The concept exploded in popularity earlier this year, largely due to worldwide lockdowns leading people towards a greater appreciation of simple activities (baking, crafting, walking in nature) that weren’t directly affected by COVID-19.

To be fair, though, the appeal is understandable regardless, particularly for young people. In a world that feels increasingly violent, chaotic, and dependent on technology, it makes sense to want to retreat into pursuits that feel corporeal, or even eternal. Perhaps cottagecore’s popularity even reflects how hopeless young people feel in the current climate, as what might once be considered a monotonous life has now become desirable, or even aspirational, to many people.

This is reflected in much of the media now associated with cottagecore, especially the work of Ghibli. The activities celebrated as part of the cottagecore aesthetic may be rather mundane, but the attitude towards them is anything but. This is reflected in many cottagecore film and TV favourites having some sort of basis in fantasy – the Moomins living their peaceful lives in Moominvalley, for example.

It is this layer of fiction that holds cottagecore's true appeal. It's an aesthetic movement which is, at its (cottage)core, about escapism. Sure, we could be watching Kiki from Kiki’s Delivery Service go grocery shopping without the magical backdrop, but it’s the knowledge that she could get on her broom and fly away into the forest that makes the domestic aspect of her life so appealing. We are able to recognise minute details of our own daily routines in the lives of characters who socialise with spirits and travel to distant Kingdoms, and in the process can briefly pretend that the less fun elements of our lives are as exciting. In short, through cottagecore, we can be just like Kiki. 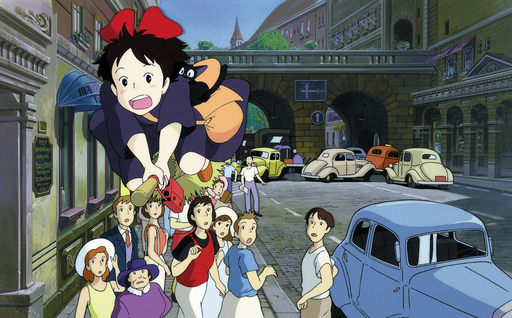 So on the whole, cottagecore is a movement with a largely universal appeal, and you can see how people from all walks of life would be attracted to the aesthetic. However, there are two subsections of cottagecore fans in particular that seem to directly contradict one another, and that seem to be using the aesthetic for different purposes: queer teenagers, and ‘tradwives’.

The former group find peace by imagining a world that may one day be within their grasp, surrounded by an unjudgmental society where community and kindness are valued. The latter group aligns the cottagecore aesthetic with right-wing ‘traditional’ values that tend to revolve around historical images of the ‘perfect wife’: domestic, submissive, and above all, entitled to this lifestyle. This has created an odd climate when, for instance, looking at the cottagecore tag on Tumblr – you might be looking for nice photos of mossy rocks, and instead stumble upon an article about how to best serve your husband.

So where does Studio Ghibli fit in with the bizarre ideological struggle that cottagecore as a phenomenon seems to have cultivated? Well, it represents the best of the movement: optimistic, anti-consumerist, and above all, inclusive. One famous Ghibli image that has been shared around in cottagecore circles is the genderless No-Face eating a slice of cake with his new friends, the old witch Zeniba and the young girl Chihiro. A character that, for the majority of Spirited Away, has acted as the villain, corrupted by their surroundings, is sat politely with a fork and a cup of tea, enjoying a homemade cake. In the worlds of Ghibli, everyone is capable of leading a happy, peaceful life, completely regardless of who they are, and it’s through these sweet moments that a truly inclusive and welcoming atmosphere is created.

This represents how the cottagecore aesthetic is being reclaimed from those who feel entitled to these lives, handed over to those who ultimately want and deserve peace. The oppressed people who fantasise about a life surrounded by nature and little else have likely never felt as though they would simply 'end up' in this kind of situation; instead, they understand the privilege that others have in knowing that a peaceful, comfortable existence is always within reach.

Once again, Ghibli is able to capture this perfectly, especially with the depiction of found families in Howl’s Moving Castle. In many fans' favourite scene, Sophie and Howl prepare breakfast in his ramshackle ‘castle’, frying up some of the most appealing eggs and bacon to ever be put on film. But this moment only comes after Sophie has spent hours wandering the wastes, and although she still hasn’t found the cure to her curse, the relief that this scene provides only makes the trappings of domesticity more alluring. Ghibli rarely show these characters enjoying a minute of lucidity without first establishing how they struggle in life – this only makes these moments more healing, and instead of suggesting that such a life is a frivolous luxury for a privileged few, the studio posits that everyone is entitled to pastoral peace.

Anyone who has watched a Ghibli film knows that most, at their core, are about the value of kindness and compassion, represented through simple gestures that can be widely understood by anybody. Though you may not have access to a flying castle or a mystical forest, activities like sharing a hot chocolate with a friend or lying in the cool grass are more attainable, and even just by watching these films, you’re bringing the pleasure of these cottagecore concepts into your own life.

Cottagecore online, at its best, takes an ideal that was out of the reach of LGBTQ+ people, non-white people, and the working classes for decades and makes it widely available through broadly accessible social media communities. That is the true value of Ghibli within the world of cottagecore: to take the wonderful and make it universal.