Taika Waititi's comic approach might give Marvel devotees whiplash, but it adds a welcome boost of vitality to the God of Thunder

Heretofore, Taika Waititi has been celebrated for his loopy comedies (What We Do In the Shadows, Eagle vs Shark) and whimsical coming-of-age films (Boy, Hunt for the Wilderpeople), so he seemed a surprising choice to join the Marvel conveyor belt. Fans of the idiosyncratic New Zealand director should rest assured, however. Waititi makes sure to leave his mark on Thor: Ragnarok, the charmingly offbeat, immensely watchable latest instalment in The Avengers franchise.

This chapter sees the introduction of Hela (a deliciously entertaining, if somewhat underused Cate Blanchett), the goddess of death and first-born of Odin (Anthony Hopkins), whose demise releases her from her otherworldly prison. Thor (Chris Hemsworth) and his adopted brother Loki (Tom Hiddleston) have barely any time to mourn their father before Hela arrives and promptly destroys Thor’s hammer Mjolnir. In the ensuing face-off, she quickly outmatches her brothers and the pair subsequently end up on a video game-like planet called Sakaar, ruled over by the carelessly villainous Grandmaster (Jeff Goldblum). 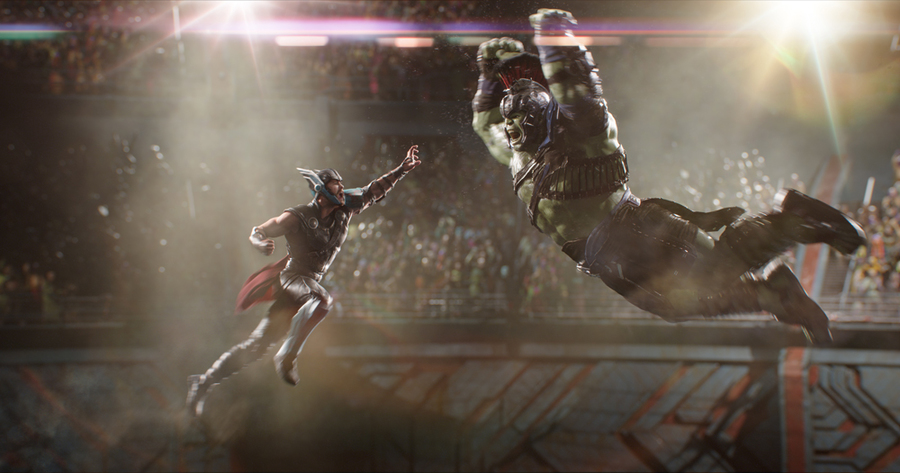 Thor takes on the Hulk

Loki manages to find favour with him, but Thor becomes Grandmaster’s prisoner and is forced to participate in his Roman gladiator-type games. There he unexpectedly encounters the Hulk (Mark Ruffalo), who appears to have permanently suppressed Bruce Banner. Meanwhile, Hela’s reign threatens to bring an end to Asgard and the growing resistance, led by the omniscient former sentry Heimdall (Idris Elba), is hardly enough to quell her tyrannical aims. Stranded without his greatest source of power, Thor must find a way to escape Sakaar and save his home before its looming, foretold end.

Two films in and the Thor series has generally struggled to strike a consistent tone; this third installment may well continue that streak and ultimately prove out of step with its predecessors. Audiences unfamiliar with Waititi may also take some time acclimating to his trademark offbeat humour. While the dynamics between Thor and Hulk/Banner, as well as Thor and Loki, evolve subtly and organically, the disjointed first act rushes its emotional beats (particularly Odin’s death, which never truly gets a satisfying moment of catharsis). But once the film hits its stride, it’s an enjoyable and compelling watch.