The Artist's Michel Hazanavicius returns with Redoubtable, a pastiche portrait of the marriage of Jean-Luc Godard and Anne Wiazemsky. We speak to Stacy Martin about playing the late Wiazemsky and who should play her Nymphomaniac director, Lars von Trier

It’s October 2017 and we're interviewing Stacy Martin, the French-English actor currently best known for her breakthrough role in Lars von Trier’s Nymphomaniac. We’re here to discuss her part in Redoubtable, the latest film from The Artist director Michel Hazanavicius, but there’s an elephant in the room, and it’s not just that we look shaken up from an attempted mugging on our way to the interview (Martin very kindly poured us a drink upon discovering this).

Only a few days before our conversation, Anne Wiazemsky, the woman Martin plays in the biopic, passed away, aged 70. An actor and novelist, she made her cinema debut at age 18, playing the lead in Robert Bresson’s 1966 film Au Hasard Balthazar. Wiazemsky didn’t make a huge number of films, but she collaborated with many of that period’s key European directors, including Pier Paolo Pasolini (on Theorem and Pigsty), and, crucially, Jean-Luc Godard, to whom she was married from 1967 until their official divorce in 1979, though their relationship had broken down as early as 1970.

Redoubtable is adapted from one of her many novels, Un An Après, which chronicles her time shooting Godard’s La Chinoise in the late 60s. As well as presenting a portrait of their romance’s rise and fall, the film documents a version of Godard’s personal and political conflicts across the surrounding period, including his ultimately successful efforts to have the Cannes Film Festival cancelled – Cannes-celled? – in light of the May 1968 civil unrest in France.

About that elephant in the room, then: does Martin know if Wiazemsky saw the film and what she thought of it?

“She saw it quite early on once it was finished,” Martin says, “and she came with us to Cannes. She really liked it. One of the reasons she agreed to give the rights to Michel was because he told her, ‘Oh, I think it’s a very funny book and I’d love to make a comedy out of it.’ And she went, ‘I always thought a tragedy should be turned into a comedy.’ And in that respect, I think she connected a lot. It was great to have her at Cannes and walk with her up the red carpet. It was very special.” 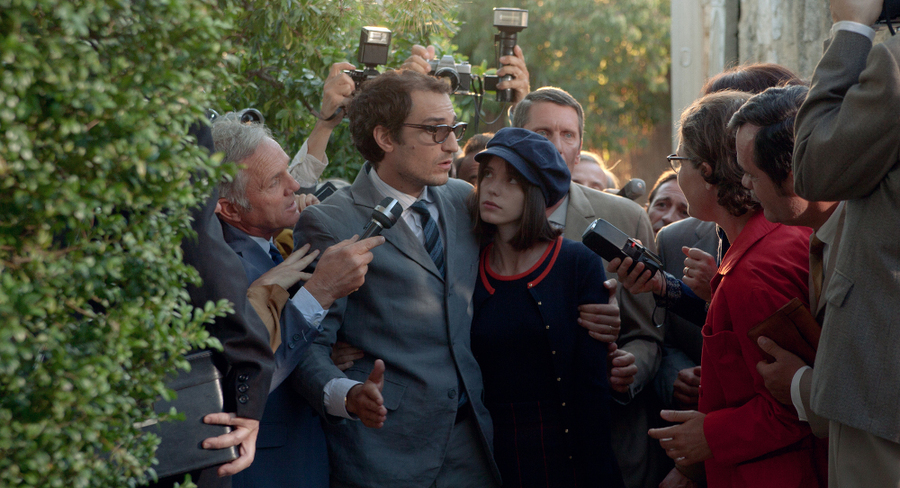 Speaking of Cannes, where the film premiered in May 2017, we wonder if any of the Redoubtable team suspected Godard might attempt to sabotage the biopic and try to shut down the festival again. “Well, apparently before one of the press screenings of this film, there was a bomb scare. And we thought, 'Oh, is it... did he do something?' It wasn’t a bomb at all, someone forgot their bag, but sometimes you think...”

Martin tells us she first fell in love with Wiazemsky as an actor: “Au Hasard Balthazar is, I think, one of the most incredible films of all time. But I didn’t know her as a writer, and so when I read the script and then got offered the part by Michel, I read the books. I found them really tender, really funny. She installs this sort of distance between her now and when she was at that time, but without making it too accusatory.”

There was also a degree of research required by Martin on the subject of Godard (played in the film by Louis Garrel), beyond the cultural touchstones of his Nouvelle Vague work. “I knew his films,” she says. “I didn’t know his more political film period. I watched all of that. I watched Le vent d’est and Weekend and Pravda, and all the Dziga Vertov movement. It was great because I got to learn about his later movements and it put in perspective his more recent work.”

Redoubtable is a pastiche comedy somewhat in the spirit of Hazanavicius’ The Artist, in that while it’s largely designed to look like the Godard films of the years in which it’s set, there are a number of visual homages to other films in the director’s career; mainly the earlier, more famous ones that most viewers will know, the style of which Godard in the movie itself is asked to revisit. In line with this, Martin’s own look in the movie doesn’t resemble Wiazemsky so much as she’s made to look like various other Godard collaborators – Chantal Goya in Masculin Féminin would seem a clear reference for her onscreen hairstyle.

Speaking on the film’s aesthetic, Martin suggests “it was more about finding the dynamic that alluded to that period. It’s about sensations more than particular people, but if you think of Godard, you also think of Anna Karina. So it was almost like doing a mash-up of Godard’s muses without taking one specifically, and then looking at a woman in ’68, in ’69 and then seeing how I could mix it all and create this character.”

When asked what she finds most touching about Wiazemsky’s story, Martin selects “the fact that she’s at a point in her life where so much is changing but she’s also becoming herself, and she has to define herself. She has to make choices not against the man she loves, but she has to make her own choices. And that’s something in a relationship where one of the most classic reasons people break up is because one of us changes paths, and you’re waiting for one person to change or to grow up or to get over a phase and they don’t want to, or someone’s not the person you fell in love with. And to see that in the film is really touching because it’s not like there was this one defining moment where she knew the relationship was over, or where she knew that it wasn’t going to work. She’s constantly trying to find the man she fell in love with and it’s so heartbreaking because you can see it slowly get harder and harder. And she says, ‘You know what, it’s not that I don’t love you, but I just want another life.’”

With Garrel’s Godard impression given centre stage, Martin’s role is largely reactive, left to convey a lot behind the eyes rather than through dialogue. “I mean, it’s definitely not in dialogue,” Martin responds to a query about this, “because I had no dialogue. Or very little.”

We worry if we might have struck a nerve, but she very quickly follows this with a laugh. “It was one of the challenges that I was faced with because I thought, she needs to exist. You need to see this couple be completely in love and happy, because otherwise if she’s just standing there not doing anything, you’ll just think this doesn’t make any sense. I needed to find that, and what I quickly found when we were rehearsing with Michel and Louis was that actually, at the beginning of the film, they need to be extremely sexy and they need to be together and they need to smile and they need to have this thing. And then gradually, this physical kinship and the smiles slightly go away, so the work is more in the physical composition than a verbal thing.”

As we finish, we posit a pitch to Martin: who, if anyone, does she think could play Lars von Trier in a biopic?

“A woman should play Lars von Trier,” she responds almost immediately. “Someone he’s worked with. What about Kirsten Dunst? I find that energy very similar to his.”

Redoubtable is released 11 May by Thunderbird Releasing