In his tender new comedy Benjamin, Simon Amstell fictionalises the most anxious parts of himself to explore his own burgeoning filmmaking career, love life and ideas of masculine identity

“I get such a lot from trying to figure out what’s wrong with me,” says Simon Amstell – TV presenter, writer, stand-up, now director – when we sit down to discuss his new feature film, Benjamin. From his 2012 stand-up show Numb to his book Help, released in 2017, Amstell has not shied away from self-examination on many platforms. So it’s no surprise that his filmmaking is a similar exercise in catharsis and recovery; the artistic process, however torturous for Amstell, provides a therapy worth holding on to. “There’s not just a film at the end of this,” he says, “but it might also be the healing of your absurd personality.”

With Colin Morgan in the title role, and the likes of Joel Fry, Anna Chancellor and Jessica Raine alongside, Benjamin is a tender comedy about a writer-director facing the premiere of his second film. With its emphasis on the autobiographical and self-referential, Amstell’s work blends his own career anxieties and humour with an affecting look at masculine identity and vulnerability.

His self-reflective tendencies led Amstell to use his past experiences not only as idea springboards but as sources for speech and character. In its earliest stages the script for the film was comprised of snippets of “dialogue from various difficult relationships I’d been in in my 20s,” Amstell explains, before he “honed that down into what were the most interesting aspects of two relationships where there was the most conflict and also the most humour.” Benjamin’s dialogue in particular is especially revealing about both character and director. “I’m not sure if I knew that at the beginning, but there was definitely a point where I realised his problem is he won’t stop talking, and the reason he won’t stop talking is then something might happen that’s beyond his control and then he would be vulnerable. I was probably just writing in the way that I spoke at first, and then realised our problem.” 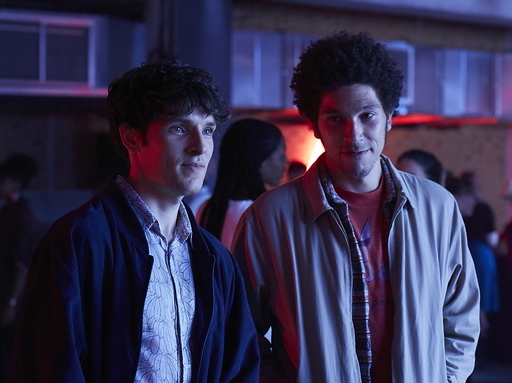 Discussing these autobiographical links, Amstell sees Benjamin as a portrait of a former self, who’s now to be kept very separate from his current outlook. Like the character, Amstell also presented his work at the London Film Festival in 2018 to an audience eager to see where his creative pursuits had led, the man who has occupied a cherished spot on British television since he first appeared on Popworld almost 20 years ago. “I had to do a speech and a Q&A, and I was nervous about doing all that and I was nervous about how the film would be received for the first time,” Amstell says.

“But then I thought about how Benjamin felt when his film premiered at LFF and what a nervous wreck he was, and I thought it would be insane if I was still him because I’ve written him out of me. Maybe I can just let him be Benjamin and I’ll be this cool, calm, director guy who gives a lovely speech and then just enjoys the film. It was certainly easier to relax knowing I’d already fictionalised the most anxious parts of myself.”

As is Amstell’s wont, he makes charming quips throughout our discussion but there is a clear sincerity behind his sentiments that lingers. Such a deeply personal process seems to have been compounded by the wider pressures of writing itself. “I really didn’t know what I was doing,” he laughs. “It’s usually just terrible for two weeks and then something will happen. I’m writing something new at the moment and for about two weeks it’s seemed impossible to do anything, or solve problems in the script. I might just have to spurn the whole thing and get a new job.”

As well as writing and directing, Amstell was directly involved in the creation of the music in the film along with former Klaxons keyboardist James Righton. The songs, written to be performed by Benjamin’s love interest Noah (Phénix Brossard), are honest and raw, almost adolescent in their aching tone but wholly mature in their expressive content. While Benjamin can never say the right thing to anyone, Noah exposes his heart to crowds of people. Another mentally taxing process, Amstell explains: “I was in an acting workshop where people were really encouraged to go to the root of what was going on for them emotionally, so when I came to writing these songs I realised what they were really about.” Laughing, he says, “I know what this is. I went on a course. I know who I am now.”

The emphasis on masculinity in Benjamin and Amstell’s interest in exploring such issues of doubt and anxiety, emotional vulnerability, and self-expression was not a deliberate effort on the director’s part to tap into a current social climate. “It’s never felt to me like there’s this thing with masculinity, so I should write something about masculinity,” he says. “It’s always just come out of me, quite naturally, and I think I should just carry on like that. The only thing I have to go by in terms of whether something will be interesting, funny, authentic, is whether it’s something that I’ve felt. With this it feels like people are noticing that that’s what’s really going on, but that’s not because my process has changed, it’s just because the culture has caught up.” Our conversation is again peppered with laughter. “What I’m saying is, I’m a genius,” he jokes.

Benjamin certainly is a work of great accomplishment, tapping into a vital conversation about anxiety and mental health, especially for men, with an earnest, authentic approach that retains the comedian’s signature touch. We close our chat looking forward to his next projects, and Amstell displays his eagerness to continue in the filmmaking world. “I think if I can make a film every now and then, and also go on tour every now and then, I’ll be pretty happy with that.”

Benjamin has its Scottish premiere at Glasgow Film Festival on 25 & 26 Feb, and Simon Amstell will be in attendance to introduce the film and take part in a Q&A
Benjamin is released across the UK on 15 Mar by Verve