There has been lots of heartache in the world of cinema this year. We asked the Scottish film community to reflect on this cursed year, and give us their films of 2020

“What a year 2020 has been so far. We had just celebrated a popular (over 43,000 admissions) and critically-acclaimed Glasgow Film Festival in February when the spectre of the health emergency loomed large in mid-March. We closed the doors to GFT on 17 March and we didn’t manage to re-open until 31 August. GFT closed again on 2 November and is awaiting Scottish Government advice as to when we can re-open.

"On the plus side, our loyal audiences flocked back once we were able to open and we ran at over 90% capacity for our available seats (14% capacity). Our wonderful staff (all of whom are being paid 100% of their wages) have risen to the challenge and made GFT a safe environment to return to. Whilst the road ahead is still very difficult I have every faith cinema will return to its former glory.”

”2020 started on an absolute high for the DCA cinema team. We were poised to hit 100,000 admissions for the first time since our doors opened in 1999. In February, we watched with joy as a subtitled film from South Korea (Parasite) won every award going and crossed over into the mainstream consciousness. The future of cinema seemed bright. And then…

”While we were closed, we put all our energy into keeping the conversation about film alive with our audience. We embraced digital and migrated our schools' programme online, launched quizzes, a film club and started new VOD partnerships. When the time came to reopen, showing films again was an absolute joy.

”I watch films for a living, but I also live to watch films. Some great films are coming down the line, and when they do, DCA will be there to champion them. Cinema-going won’t ever be the same after this year but it might just be more important than ever.” 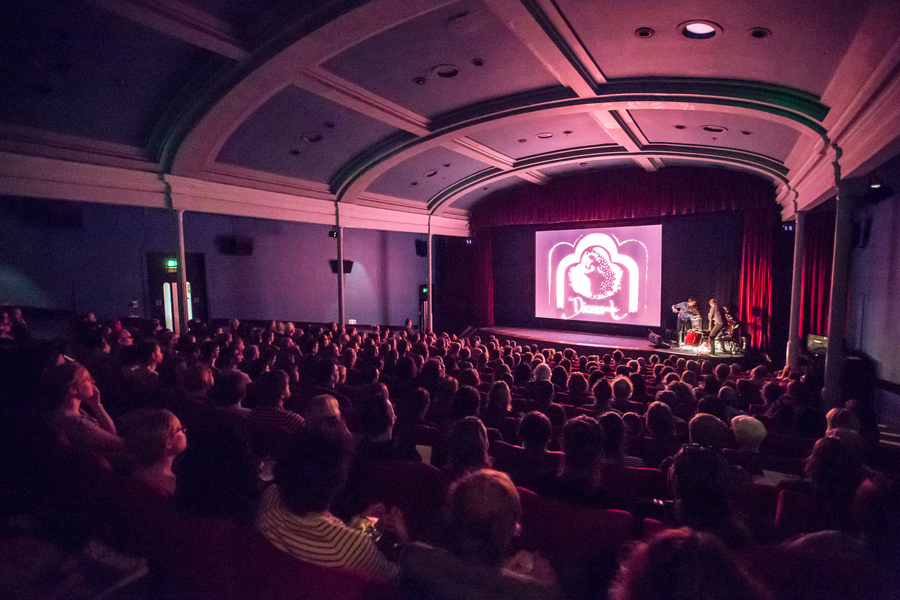 ”If you’d told me at the start of the year that our cinemas would close in March and remain closed for pretty much the rest of the year (bar a few months at 20% capacity), I simply would not have believed you. It would have been unthinkable – had I ever had reason to think about it!

"Watching all the films planned for release in 2020 disappear from the schedules, reappear on dates later in the year only to disappear again, has been, with as much perspective as I can muster, heart-breaking. But… our government is helping us through these impossible times, and on some glorious day at some point in the (hopefully not-too-distant) future, those postponed releases will happen, and we’ll all have an awful lot of catching up to do!”

“At Sundance in January one issue dominated the post-screening chats and onstage discussions and the subject on everyone’s lips was the ‘theatrical release windows’ that afford film festivals and cinemas access to titles before they appear on our screens at home. For various reasons, in recent years, these windows have been slowly but surely diminishing, but little did we know, the whole world was about to change.

"Access to content would suddenly become only one of several existential threats facing festivals and events all over the world. The film industry won’t be the only one changed forever by the pandemic and film release windows won’t be the only casualty, but as we wait to see what the future holds, let’s see out 2020 by celebrating some of the cinematic gems that – had things been very different – I would have been proud to present at Edinburgh this year.” 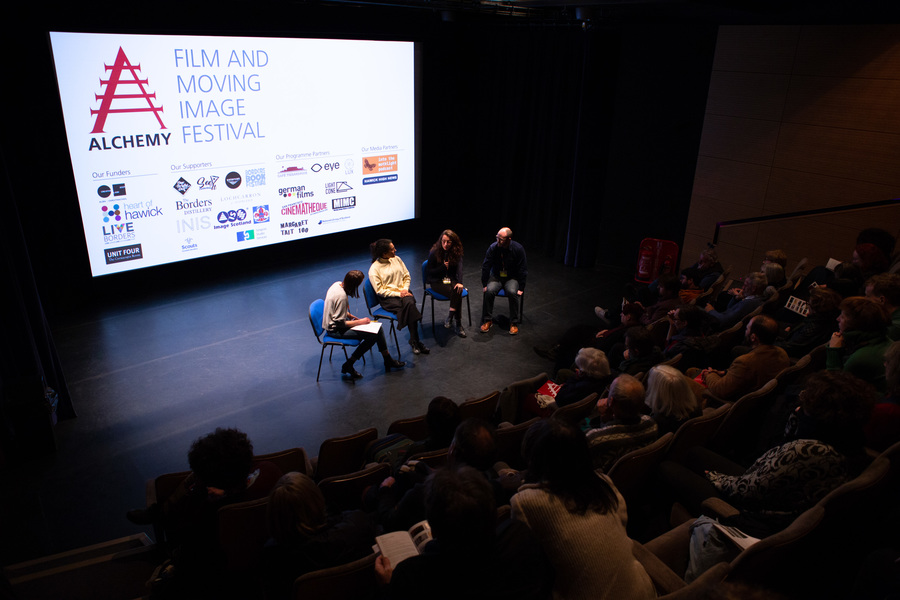 ”I have felt no emotion purer, in this foggiest of years, than the sheer exhilaration that overwhelmed me at around the halfway point of Alchemy Live, the worldwide stream of this year's Alchemy Film and Moving Image Festival, delivered miraculously hiccup-free over a home broadband connection in Hawick. Like 2020’s worst moments, it was captured on video.

"To the irresistibly catchy beat of Zombies, the extended three-in-one music promo by rapper Baloji, careful not to trip on hazardously ubiquitous ethernet cables knowing the whole thing was reaching a genuinely global audience and that it might all crash at any given moment, I danced. There’s no doing that at the pictures! 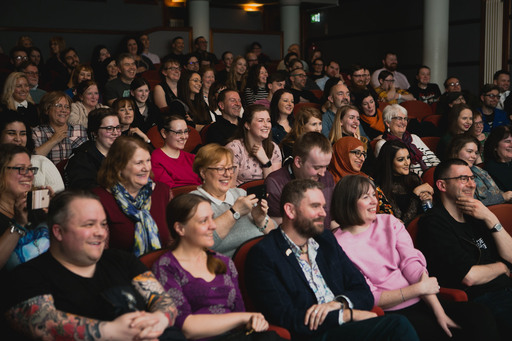 “2020 has been an unusual year in many ways, and the same is very true for cinemas. After Bong Joon-ho’s Parasite attracted the biggest consistent audiences we have ever recorded at GFT, we along with the rest of the UK had to shut up shop for six months. The best of times and the worst of times, indeed. Parasite remains my number one film of 2020 – I haven’t seen such confident, thrilling, genre-twisting storytelling since I first discovered the Coen Brothers – and as an experience to remind you of the power of cinema, nothing else this year came close.

“The rest of my top five reflects how stunningly good a year it has been for film. Portrait of a Lady on Fire and Never Rarely Sometimes Always are the two most emotionally resonant film experiences I’ve had this year; to think of them is to immediately return to the scenarios they vividly create. The Lighthouse complements Parasite as a film of unique and terrifying vision, beautifully crafted and wickedly funny, while Rocks is the best new British film I’ve seen in years.”

“It's no wonder that my favourite films this year are concerned with caring for one another. I've been drawn to films about the love of cinema and films that have superb endings – perhaps a subconscious desire for a denouement to 2020 that doesn't leave us all bereft.

"A Beautiful Day in the Neighbourhood looks at the business of being a good neighbour and warns of us against myth-making each other, to stop projecting our own desires onto others. In Talking About Trees, several Sudanese auteurs set on reviving the Revolution Cinema in Khartoum, Sudan. In Clemency and Portrait of a Lady on Fire, final sequences transmit overwhelming emotion and silent screams across the screen in a manner reflective of how it's felt to endure global government mismanagement, the ravages of this pandemic, and constant fracturing, breaking hearts. Kmêdeus is a spell-binding tapestry blending folktale, collective memory and an inquiry into the notion of legacy while grasping at ancestral memory.” 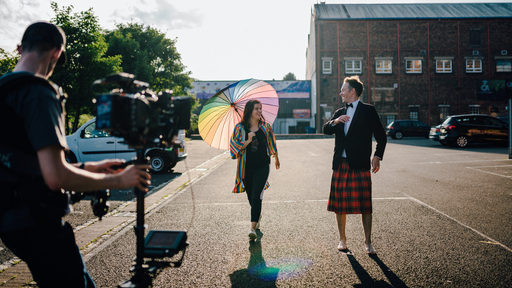 “So much of what has happened this year has demonstrated the imperative of listening to those in a position of less privilege or power. My thoughts have been with the front of house workers at Tyneside, at Cineworld and elsewhere who’ve not been afforded the most basic duty of care by their management. The sector needs to do better.

"As for my choices, they all shook me out of semi-present home viewing. Zia Anger reworked My First Film – intended to open the aborted GSFF in March 2020 – as a live-streamed performance, and this shared experience between performer and viewer, both hunched over laptops, became one of the defining moving image works of lockdown. The only bona fide feature film on my list, Remi Weekes’ His House, was a haunting portrayal of refugee trauma. Netflix crassly released it on Halloween but its horrors were too devastating to offer guilt-free thrills.”