Robert Eggers and Willem Dafoe on The Lighthouse

The Witch director Robert Eggers returns with The Lighthouse, another meticulously detailed period horror. We sat down with Eggers and one-half of his cast (the legendary Willem Dafoe) to hear about the arduous shoot and Robert Pattinson peeing his pants

The chairs at London’s May Fair hotel feel too comfortable. You could probably sink into the cushions if you leaned back far enough. As I sit with Robert Eggers and Willem Dafoe to discuss their new film, The Lighthouse, the atmosphere around the room is almost cosy. The luxury of a central London hotel feels completely at odds with what we’re here to talk about; The Lighthouse is anything but cosy.

You get the sense that both Eggers and Dafoe sincerely love talking about this film despite the immense number of questions they’ve fielded on the topic since its premiere at the Cannes Film Festival in May. Eggers will happily speak at length about any aspect of production. His words usually run away from him before he catches up, and he’ll often restart a sentence to really get the point across. Dafoe, likewise, is completely engaged, staring right into your eyes and hanging on to every word.

The director's follow-up to his blisteringly assured debut, The Witch, pulls no punches in shocking (and traumatising) viewers with audacious imagery. The film follows two lighthouse keepers (played by Dafoe and Robert Pattinson) and their descent into madness when they become stranded on an island off the coast of New England. Its fairly simple premise leaves room for visual bravado: the exaggerated shadows and boxy aspect ratio recall German Expressionism, but the sheer chaos on screen is wholly original.

Dafoe remembers seeing The Witch completely blind (no critic reviews to sway his opinion), and left feeling so impressed by what he had seen that he immediately got in touch with Eggers. “It builds your confidence when Willem Dafoe sees The Witch and his team contacts you for a meeting and says ‘I want to be in whatever you're doing next',” Eggers jokes, apparently still in disbelief that it even happened. After their meeting, a potential collaboration manifested into one of the actor’s most eccentric performances in his long and prolific career. Dafoe’s Thomas Wake is a hell of a role: a flatulent, bitter seaman with a pipe perpetually hanging off his lip. The actor is thankfully the furthest from the aggressive seafarer he portrays. “It’s nice to be a nice guy, but it’s also nice for [people] to be a little afraid of me,” he says, with a smirk on his face.

The actor reveled in the chance to play around with the screenplay’s period-accurate language (“It’s very unusual”) and the world Eggers created. Coming from a theatre background, he also expressed his excitement at carrying an entire film with only one scene partner. “I'm 64 years old,” Dafoe says. “I want to keep on doing interesting things and have demands put on me, and with a two-hander, you have some work. I have enough boyhood seafaring myth fantasies that are still alive for me.”

Eggers speaks about his writing process like he’s embarking on a PhD dissertation – and in some ways, he is. He’s truly obsessed with researching history. For The Lighthouse, literary giants like Sarah Orne Jewett, Herman Melville and Robert Louis Stevenson aided the screenplay, and journals from real lighthouse keepers informed everything from the dialogue to the costumes and production design. His dedication to research suggests he’ll stick to making period films. In his mind, making a contemporary movie would be “incredibly boring".

“I’m very obsessed with the past and I prefer to hang out there, but clearly I’m trying to find out where we come from and where we’re going from the past,” Eggers says. “Of course, I am still influenced by the zeitgeist even though I try to stay locked in darkness in my study, but I can’t help but be influenced by the world because my dungeon isn’t vacuum-sealed.”

With that in mind, Eggers’ films are perhaps like their own little museums. The set of The Lighthouse was filled with careful reproductions of the beds, lamps and plates that you would find in a lighthouse in the 1800s. He cites Guillermo del Toro as a filmmaker who takes the opposite approach by sourcing props and locations for the story’s needs, not concerned with anachronisms. It works for him, but to Eggers, that interpretative method is “crippling”. The hard work it takes to get the exact chair from a photograph he saw is integral to his method. “I find that if the material world and the language are super-specific and dialed in, things just are a little bit credible,” Eggers says. “You don't run the risk of anyone saying, ‘Yeah, I don't really buy it'.”

'You're like two guys going to war. Is it unpleasant? Yes. But unpleasant is sometimes good' – Willem Dafoe

Luckily for Dafoe, the painstaking hours spent on meticulous research made his job a lot easier. “Robert had so much stuff to give me and he pretty much turned me on to everything I needed,” Dafoe says. “But you can only prepare so much. You don't know until you get there, until you get those clothes, until you put those teeth in, until you start to speak the words, until you start to deal with the other actor. There was a lot of research in terms of just knowing that period, but you also can't play period. It's just for fun.”

There's a lingering emphasis on the word 'fun'. Much has been said about how arduous the Nova Scotia shoot was, but Eggers and Dafoe add the caveat that it was, in fact, enjoyable... sometimes. “I didn’t have to push Willem and Robert because they signed up for this,” Eggers says. Every horror film seemingly has its own horror stories from the set, but instead of supernatural hauntings, the cast and crew faced gruelling conditions on the rough coast. Pattinson didn't make it any easier. He threw himself into the role that sees him do everything from obliterating a seagull to having sex with a mermaid. At one point, Pattinson wanted to punch Eggers in the face, though the director admits he was unaware that he felt like that. Pattinson has also spoken of the torturous lengths he went to in the name of getting into character, such as eating mud and pissing himself, but there is one thing Eggers wants to clarify: Pattinson did not get drunk on set.

“I think some people interpret the fact that he was talking about being unconscious and pissing his pants as him actually being drunk, but as far as I'm aware, he did not drink a drop when we were shooting the movie,” he explains. “When we wrapped for the day, he drank plenty, but that's another story. But was he gagging himself and potentially urinating in his pants because of the fact that he was so into the performance? Sure. Was the weather punishing and brutal? 100%. Did we have fun? Yeah. But was it like a jovial set? Not at all.” 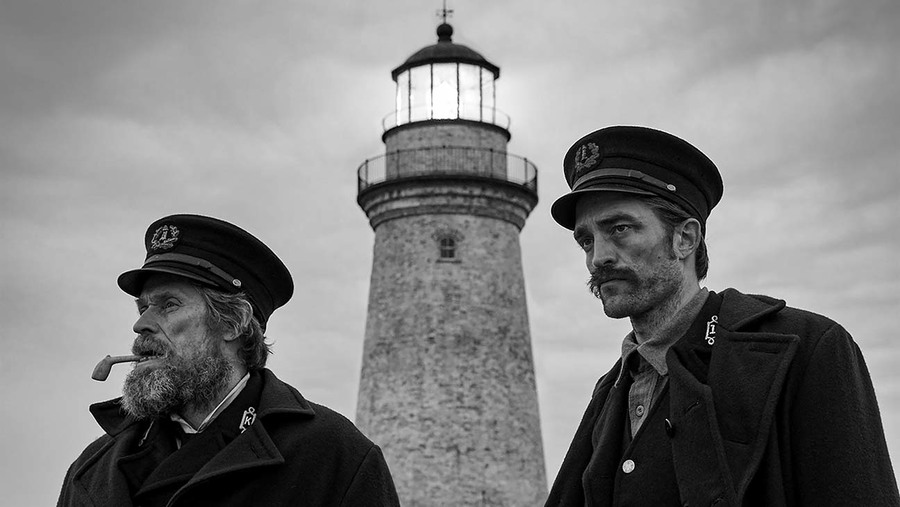 While Pattinson was going close to full method on set, Dafoe wasn’t quite as intense about his performance. Their acting styles are on opposing ends of the spectrum, and Dafoe is able to turn off the character when the camera stops rolling. Instead, the most pressing worry for him was getting sick on set. Dafoe wasn’t urinating in his breeks, but he has his own nightmarish stories from Nova Scotia. He speaks about one scene in which he chases after Pattinson with an axe as he tries to escape the island. It was raining; water cannons were being used to mimic the crashing waves. They had to shoot the scene over and over again because of the unpredictable weather.

“We were so cold that we were shaking,” Dafoe recalls. “We were practically hugging each other just to stay warm. Yeah, that's hard but also that pushes you. It’s that you have to suffer but it's a little bit like that takes you there and makes it stick. That's the bonding thing. You're like two guys going to war. Is it unpleasant? Yes. But unpleasant is sometimes good.”

Before our time is up, Dafoe has some thoughts about his beard. According to him, it’s the biggest beard he’s ever grown, and if you’ve seen The Lighthouse, you’ll agree. It’s a real, bushy sailor’s beard that protrudes from his chin and more often has food stuck in its hairs than not. He’s clean-shaven now. “I like my face better,” he says smiling. It’s a relic of the past, much like The Lighthouse, though unlike Dafoe’s gnarly beard, the film is the type of artefact kept closely guarded, always remembered with admiration – and a little fear too.

The Lighthouse is released 31 Jan by Universal