The muse gets a tough deal in life. The source of inspiration for many a great artist, she (and it's almost always she) rarely gets celebrated or, perhaps more importantly, compensated for the emotional labour performed to help the artist realise their potential. Nick Broomfield’s compelling new documentary, Marianne & Leonard: Words of Love, appears to be trying to redress this balance. The Leonard of the title is Leonard Cohen, the much-loved Canadian singer-songwriter, while Marianne is Marianne Ihlen, the Norwegian woman Cohen lived with on the Greek island of Hydra when he was still a less-than-successful poet, and who inspired many of his earliest hits, including Bird on the Wire and So Long, Marianne.

The relationship ended in the late 60s when Cohen left Ihlen and her young son, Axel, from another marriage to pursue his music career and many other women, but it wasn't a clean split and they kept connected throughout the decades. On her deathbed, Ihlen received the tenderest of notes from her former lover:

"Dearest Marianne, I am just a little behind you, close enough to take your hand. This old body of mine has given up as yours has too.

"I have never forgotten your love or your beauty but you know that. I don't have to say more. Safe travels old friend. See you down the road. Endless love and gratitude.

Using some evocative archive of Ihlen and Cohen on the island, much of it captured in the 60s by the legendary filmmaker DA Pennebaker, and some incisive interviews with people who knew them, the film paints a heady picture of the free love and expression that blossomed during the 60s counterculture, only to curdle when many stayed too long at the party.

Broomfield narrates this bittersweet story of romance and sorrow, and, as he often does, also figures in it himself. It transpires Broomfield also had a relationship with Ihlen. He met her while he was a student visiting Hydra and Ihlen's relationship with Cohen was in flux, and as such the film not only act as a celebration of an unsung figure but also a goodbye to a person dear to his heart.

We sat down with Broomfield to discuss the film ahead of Marianne & Leonard: Words of Love's UK premiere at Edinburgh International Film Festival.

The Skinny: Can you take us back to when you were a young 20-year-old visiting Hydra? What were your first impressions of Marianne?

Nick Broomfield: Well, I couldn't believe my luck. You know when someone out of your league looks at you and waves? I thought, this has got to be some mistake. She was just very very beautiful, sunkissed blonde and kind. And the island itself is intoxicatingly beautiful on so many levels. I mean there were no cars, there are just mules going up and down those narrow streets. It's a very simple way of life there.

Everyone there seemed to be gorgeous and talented, they were writers and painters. So you're swept off into this euphoria, which is very overwhelming, really. But it was also an introduction into a way of life that you very much wanted to be a part of. And it seems to have endless possibilities of an alternative way of life rather than necessarily being a Barrister in a Court of Law, which was what I seemed to be headed towards at that time.

When did it dawn on you that you wanted to make a film about her?

Well after they both died, my first thought was, 'How dare they die!' You think, isn't it awful that I never really had a proper goodbye or couldn't I have found a bit more time to reconnect properly. And because Marianne was such a significant force in my own development and so on, I just thought I wanted to go back into it and find out more about her.

I actually was invited to a festival in Norway to show Whitney: Can I Be Me, and funnily enough the guy who ran the festival, which is a very small one, had shared an apartment with Marianne in Oslo when she came back from Hydra, you know, when she was kind of thrown out of the house [by Leonard] and I spent quite a lot of time with him. He's really an amazing guy. And then I met Jan Christian Mososef who was there too [and] had just shot that footage with Marianne at the end when she read Leonard's letter. I just thought, 'I know that there's a great film here and it's so close to my heart, I'm definitely going to do it come what may'. And we started shooting it pretty soon after that.

You're famous for inserting yourself into your films, but this one seems different. You're in the film but in a much more personal way.

Yeah, I think you're right. Maybe it's a new stage for me; I've just finished a film about my father. But it is daunting. The hardest thing for me in this film was to work out how to, tonally and storywise, use myself in the film because there are these two big personalities – you don't want to detract from their story and say, look at me. So that was the thing that I had the most problems with. Just getting the mixture right and making it still about them, even if it was partly about me, you know. 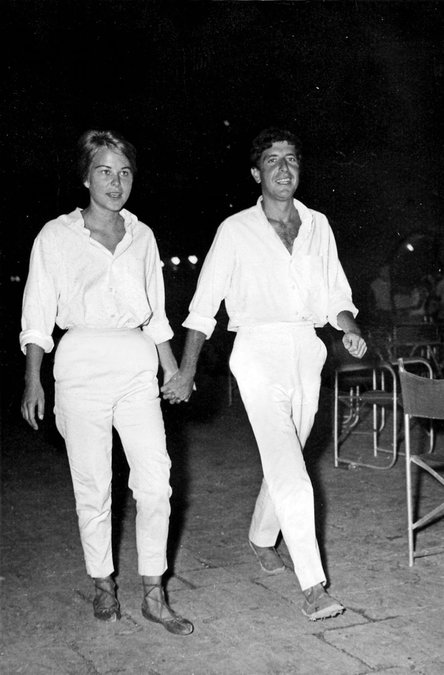 The film also seems like a celebration of the muse. There have been many films and documentaries about great artists but rarely is there mention of the people (who are usually women) who inspire and nurture them.

Yeah, I felt that very much. Marianne was an incredibly generous and giving person who probably hasn't really received... I don't know if 'credit' is the right word, but the recognition for what she did. And I think that happens an awful lot because they're not charging ten percent for their services; they don't have a release form to protect them. I don't think it means that they're irrelevant, 18th century kind-of characters who were fools to allow themselves to be used in this way, because I think that's just part of the way in which our relationships are organised – it's just the unsung hero thing. But she definitely, I felt, enabled a lot of people, not just Leonard, and she definitely helped him make the transition from being a writer to a singer.

And it wasn't just emotional support. I remember she also sold her house and moved in with Leonard and I think they used a lot of that money to live off, but of course that meant she didn't have a house at the end of it... I think she felt it was pretty unfair. But then I think he did stand by her too. It was actually interesting how many of the letters between them, which recently got sold and which I read before I started making the film, were to do with money. You know, 'so I can send you $200 next week', those kinds of things. So there was a sort of financial dependency between them. But I don't think you can underestimate her influence really.

And she was also a kind of muse to you: she encouraged you to take the plunge to make your first film...

Absolutely. She encouraged people to have belief in themselves. I know how destructive I can be sometimes: you come up with 101 reasons not to do something, and why it's going to be terrible. She would always be very positive about taking the next step, moving forward, kind of not letting you self-sabotage yourself, which is half the battle.

What was your relationship with Cohen? Did you ever meet him in your travels and did you appreciate him as a musician given you knew this story?

I did meet him. I met him kind of later on and we talked mainly about Axel [Ihlen's son], which he was very upset about. Because Marianne was still clearly so madly in love with him, I spent a lot of time trying to understand his songs, and probably doing a pretty lousy job of it and feeling completely inadequate next to this great man. And I remember going back to college and listening to the first and second albums, which was a kind of mixture of pain and pleasure, I think. It obviously all makes a lot more sense to me now that I'm much more aware of the whole thing, but at the time it was part of the blur of this world that I didn't really understand that I was entering.

Did you see him as a romantic rival?

I felt in Marianne's eyes he was more like God, so I'm not sure I could even take on the sort of earthly competition of a rival... I remember the first woman I really fell in love with was madly in love with Byron and I had the same kind of feeling about that relationship, which was 'how do you compete with Byron who's not only a genius but dead?' So with Leonard, he was a genius and he was alive. It was a different world, different league.

Marianne & Leonard: Words of Love is released today by Dogwoof