In Julian Barratt-narrated short film Future Perfect, a child's drawing goes on a journey through time to become a blueprint for a twisted new version of humanity. We chat to its director, Sean McKenna

In last month’s magazine, we were celebrating the joy of accidentally coming across a short film on late-night television. One of the institutions keeping this proud tradition alive is Channel 4 through Random Acts, a strand dedicated to the short film form that sees dozens of emerging filmmakers commissioned each year to make films for the channel.

Among this year’s excellent crop of Random Act participants is Newcastle-based filmmaker Sean McKenna with his beguiling Future Perfect. The film begins with a young boy at a table drawing a crude picture of his mother and father from their wedding photo. The quotidian scene is juxtaposed by a mythic narration. “In the beginning, The Child thought that there were two gods, who looked like each other, but with different hair. And one was louder, and the other was quieter.” Providing this intimate yet epic voiceover is the familiar tone of Julian Barratt of The Mighty Boosh, Nathan Barley and Flowers fame.

From this humble beginning, the boy’s drawing goes on quite a journey. First, it’s instantly put on the “wall of memories” aka the fridge. “They had already forgotten,” laments Barrett’s narrator. This is when McKenna’s experimentation kicks in, speeding up time and taking us on a journey through days, weeks, months, years and then eventually centuries. The boy’s drawing is placed underground in a time capsule so the family can “look on it fondly, in some forgotten future.” The only problem is they forget to dig it up, and the drawing ends up outlasting both them and all traces of our civilisation, making this crude child’s rendering the only record of humankind for an alien race who visit our barren world in the future.

McKenna uses an array of techniques to suggest the passing aeons, most of them – as he reveals below – shot in a kids’ paddling pool. Ahead of Future Perfect arriving on Channel 4’s platforms we spoke to McKenna about the film, his inspirations and why Barrett was the perfect narrator for this melancholic short.

The Skinny: What was the genesis for Future Perfect’s story?

Sean McKenna: I have two boys (my eldest is the boy who draws the picture in the film) but my creative life and my family life have largely been separate and I was thinking that was ridiculous and wanted to do something that touched on being a parent in some way. I was also thinking about the things we leave behind when we're gone.

I didn't take those thoughts and intentionally cook up the idea from them but they were on my mind when the idea bubbled up.

Future Perfect blends a lot of film and animation techniques, both old and modern – can you tell me a bit about the various techniques you wanted to use in the film?

The techniques and tricks came about from trying to solve how to make it feel like a one-shot over a vast period of time but I wanted to use as little CGI as possible. I referenced the two Time Machine films when talking about what I was after. The time travel sequence in the more modern, Guy Pearce vehicle looks impressive but the original 60s, George Pal version has much more appeal, even though it's not as 'real'. It had to be more expressionistic because of the technological limitations of the time but it's all the better for that to me.

To do it we had the sequence separated with trick cuts and filmed things at different speeds, reversing some shots to achieve what we wanted. The cracking floor was face clay filmed over three hours with a few hairdryers blasting it and the time capsule coming out of the ground was shot at 200 frames-per-second and reversed. Most of it was filmed in a paddling pool with trays for different time periods (soil, clay, sand). We could then fill it with water and reverse it to make it seem like it was drying out. Other bits are real. The underwater section was filmed by me, plunging a GoPro into a stream and kicking up the sand. I looked like the shittest fisherman in England. Or someone with a grudge against ankle-deep rivers. 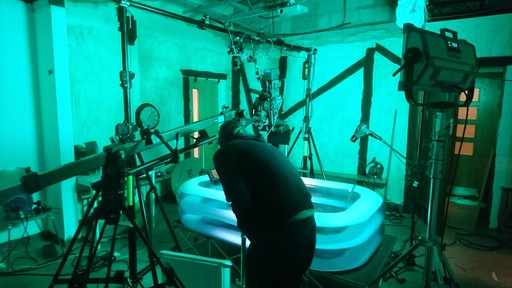 It’s quite a melancholic film. Is there any reason in particular why you think you’ve been thinking about the end of humankind?

It's pretty difficult to escape the doom-laden atmosphere hanging over everything at the moment but I can't say there's anything specific that instigated that. It's just a fact that, sooner or later, we're all done for. I suppose most people go through life trying to avoid thinking about that as it's depressing as fuck, from one perspective, but it's also pretty funny from another.

I mean, you and everyone you now know will likely be dead in a hundred years and yet we spend a good chunk of our time searching for matching socks. It's ridiculous. And ridiculous is funny. So, yes, it's melancholy but melancholy and funny aren't mutually exclusive. I've always liked that line where you don't know whether to laugh or scream. I hope people watching will do either one or the other or, preferably, both.

The film has a melancholic streak, but I guess it also says that art will live on after we’re gone. Is that what you’re trying to suggest and is that a comforting thought, that your work will outlive you?

That's a very positive way of looking at it and I'm tempted to leave it there but when making it I was more thinking that what most of us will leave behind are these shallow, one-dimensional projections of ourselves online. If someone was to remake us from our public presentations they'd recreate these deformed, childlike versions that barely resemble us as actual people. That's not particularly explicit in the film though and I like your interpretation better.

I couldn’t help thinking of the ending of Steven Spielberg’s AI – was that an inspiration?

Someone else has said the same but I can't say it was, consciously. I recently rewatched a short film called Plastic Bag and realised it had a lot of similarities too but, again, I wasn't consciously influenced by that either. There are sections that are specifically influenced by various things. Time Machine I mentioned earlier; for the ending, I was after something like the end of the 70s Invasion of the Body Snatchers or The Asphyx. In fact, those off-kilter 70s TV plays are quite an influence. They were often disturbing and (sometimes unintentionally) funny. The strobing lights on the water sequence was influenced by the experimental filmmaker Stan Brakhage. They were all brought to bear to try and solve how the hell I do what I wanted to do in five minutes.

Julian Barratt seems perfect for the narration. Why did you want him in particular and how did he get involved?

I met Julian a couple of years ago while hosting a Q&A with him and Simon Farnaby during their promotion of Mindhorn and we got on. I've been part of a comedy trio for a few years called Hot Gulp and after the Q&A he got in touch to say how much he liked some of our stuff. Gulp haven't done anything for a while so when I started developing Future Perfect I thought he'd be great for it and asked him.

As funny as Julian is, he also has something dark about him so he was perfect from that point of view. He's also one of those people who's managed to achieve a pop-cultural status while coming across as really smart in a non-panel-show-snarky way so I thought he could make the pretentious narration sound acceptable. And he does. I couldn't be happier with what we got.

Can you say a wee bit about your experience of working with Random Acts?

When I was growing up, Channel 4 used to show a variety of leftfield and experimental work, usually late night, for the post-pub/insomniac demographic. A lot of it was guff but there was some great stuff there and I used to enjoy it a lot. I feel like the Random Acts strand is a call back to that (and what, I think, Channel 4 should be). The work they commission is a reminder of the creativity that's out there. It's been very flattering to be commissioned by them and to receive support from the BFI too and, in both cases, once they gave the green light they trusted me to produce what I said I would and were nothing but supportive. That's continued after production too, getting the film out there so more can see it. It's been great working with them.

Take a look at Future Perfect in the player above or on YouTube; more info on Random Acts at www.channel4.com/programmes/random-acts/episode-guide; Future Perfect was made with the support of the National Lottery through Film Hub North as part of BFI Network