Lynne Ramsay is back with crime thriller You Were Never Really Here. The Scottish director tells us about channeling Sam Fuller B-movies, collaborating with Jonny Greenwood and getting a performance from Joaquin Phoenix that's both brutal and tender

Lynne Ramsay is four for four. Almost 20 years into her feature film career, she has made only a quartet of films, but none of them are anything less than excellent, and at her best she’s one of the most thrilling, penetrating stylists working in British film today. One can think of her pictures as a kind of ‘minimalist maximalism’ – little dialogue, but intense close-ups on characters’ faces that reverberate more than words. Her films are never very long, but their individual sequences are drawn out, with stark soundscapes and hallucinatory plays of light and darkness.

If Ratcatcher (1999) and Morvern Callar (2002) were character studies and art films closer to a social realist mode, her third movie, We Need to Talk About Kevin (2011), and her new film, You Were Never Really Here, scratch the itches of character study and art film while bringing the exploitation thriller into the mix. Kevin, based on the novel by Lionel Shriver, spoke as much to the parents’-worst-nightmare potboiler tradition of The Good Son and The Omen as it did to deep human insight about a woman questioning her maternal instincts.

In the new one, based on a novella by Jonathan Ames, Joaquin Phoenix plays Joe, living with PTSD from both war and childhood trauma, cutting through the fog of his suffering via employment as a soldier of fortune. Joe’s weapon of choice is a hammer. He’s hired by a New York politician to rescue his daughter from a child sex ring, and from there, a brutal odyssey into more fog begins.

Some critics have compared You Were Never Really Here to hard-boiled avenging angel movies like Taxi Driver, Point Blank and Drive; we found it hard not to think of William Devane in Rolling Thunder, Paul Walker in Running Scared and Gena Rowlands in Gloria. Ramsay has previously talked about her admiration for Sam Fuller, and how he used genres to explore ideas beyond the B-movie material. How does she feel about working in this realm? 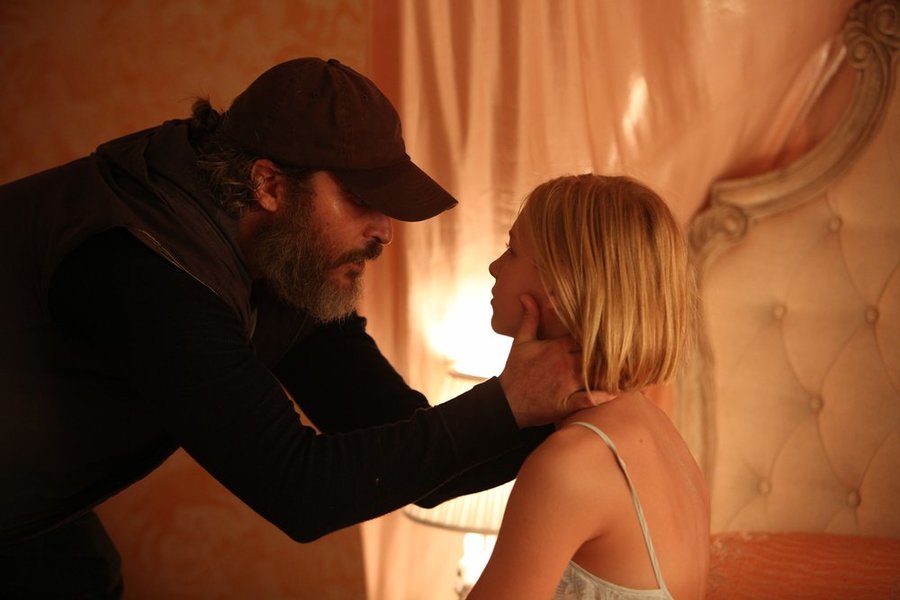 “I love films like The Shining, which seems like a straight horror film, but it's really about a man going mad,” she says. “And I think within the construct of a genre, you can tell an exciting story, but also go deep into the psychology of things. You grow as a filmmaker, and you're interested in different things at different times.

“I was kind of brought up with 50s B-movies, in a way, and I've always loved the short form of telling a story. The reason I always mention Sam Fuller (Shock Corridor, Forty Guns) is, I think he's pretty subversive for his time, speaking about things within this framework that were pretty controversial. Funnily enough, [You Were Never Really Here] ended up like those 50s B-movies, really economical, 95 minutes.”

What gives the film its Ramsay touch, however, is less its genre conventions than its sensory expression. “The way it was made, and the whole spirit of it, had a kind of electricity," says the 48-year-old filmmaker. "And it was so fast." Shooting in the heat, and sweat, and grime of New York City also fired Ramsay's imagination. “I was living on a small island in Greece when I was writing this – with no cars – so to go to New York, I was overwhelmed. I felt overwhelmed by the sound of New York after being in that environment, how it makes you feel like you're going insane. The city sounded like bombs dropping, fireworks cracking, and I said to Joaquin, this is what you’re hearing in your head every day.”

You Were Never Really Here is a brutal film, but it’s also a vulnerable one. Phoenix’s character is tough and expert, but he can’t win every battle. “Joaquin and I came at it thinking, ‘Let's break every cliché you'd normally see,’” says Ramsay. “It's based on a novella that's a really gripping page-turner, but the best thing about it for me was the character, because the character's so flawed. You have this guy who can't even save himself. He's suicidal, he lives with his mum – I don't want to give too much away about the movie, but it was such a flawed character that couldn't solve the world in a way. It's not the guy coming in with the six-pack who is invincible – it's anything but.“

"Within the construct of a genre, you can tell an exciting story, but also go deep into the psychology of things" – Lynne Ramsay

Not only is the hero’s journey unpredictable, it gets to a point where we’re not even sure if it’s literal. After seeing the film once, you may feel the need to see it again right away. “I went really surreal with the end. The more he was kind of spiraling into madness, the more I could play with it. You think you're going towards somewhere where you get the obvious conclusion, the big showdown at the end, and you don't get the pleasure of that – he tips over the edge.” Surprises should even be in store for those who've already read the Jonathan Ames novella. “Jon's quite a cool guy, so he knew I was going on my own journey with the story and it was quite different. The more Joaquin and I talked about it, it was becoming about a crisis of masculinity. There's no easy resolution, he doesn't get easy vengeance, he's failing, he's breaking down, and he's kind of at a pivotal point where she's the one that sort of lights him from within.”

The ‘she’ Ramsay mentions is 15-year-old Ekaterina Samsonov, who plays the young girl Phoenix’s character saves from bondage in the first instance. But as Samsonov character becomes Joe’s sidekick, she shows a quiet strength of her own. What was it like, we wonder, directing a child through a story involving such tough stuff as bludgeoning violence and sexual exploitation?

“She has an amazing screen presence. At first, I thought, she's too beautiful, almost. She's got this kind of luminescence, and she still felt like she was a young kid. Her parents knew I’d be really sensitive about everything. And they’re Russian, so they’re pretty tough!

“I think her and Joaquin's relationship helped, and that she trusted me, and that we hung out a lot. She'd come round at the weekends, and hang out beforehand. She knew it was dark subject matter... she was conscious about it, but she still has a kind of naiveté." In other words, she was no drama school kid: “I don't think her parents had made her do singing and dancing and acting classes, you know.”

For the movie to get completed in time required a lot of effort from the dream team cast and crew, a lot of whom came to visit Ramsay early to make sure they were ready in time. “It was a sort of trial by fire way of making films, but it had the right elements,” recalls Ramsay. “Even the director of photography, Thomas Townend, he'd come to Santorini when I was writing this, and we'd done quite a lot of prep. We knew the film inside out, and I think that was the reason we were able to do it so fast. The same with the sound design, and the same with Jonny Greenwood's involvement. The whole sort of mix of people, it was like a band, the way it clicks.”

This is Ramsay's second collaboration with the Radiohead guitarist, following his score for We Need to Talk About Kevin. “Jonny's amazing, and a very modest man as well. I was showing him five minutes, then ten minutes, then 15, he didn't know what was going to happen next – he knew the script, but lots of things had changed, and I think it made it quite exciting.” It sounds like this piecemeal reveal of the film has led to a similarly startling score. “The way we approached the music was, we get something quite familiar and then it goes somewhere completely that you don't expect about Joaquin's character. I've probably got another whole album of amazing Jonny Greenwood tracks! He doesn't score to picture – it's more kind of inspired-by, so you get a pretty long piece.

And what now? Ramsay isn’t making films at a prolific rate, so we ask if that’s by design or happenstance.

“It's funny, with directors. I've had ideas that have been in gestation for ages. I don't feel frustrated because there's something I can't get off the ground, there are just things that haven't quite pieced together yet. I get so involved with every film I do. For me, all I want to do is be in a room thinking about ideas, being in my study thinking. I'm dying for that quiet time. To get back to working on lots of things I've been thinking of.”

We look forward to them. Ramsay hasn’t let us down yet – and You Were Never Really Here gives us much to puzzle over and debate until next time.

You Were Never Really Here is released 9 Mar by StudioCanal