Karyn Kusama's latest film, Destroyer, is an epic LA noir centered on a grizzled cop played by Nicole Kidman. The talented director discusses her rollercoaster career and the pleasure of seeing her porcelain star release her inner rage

We’ve seen many movie cops like the detective at the heart of LA noir Destroyer. A sallow-skinned heavy drinker who’s quick to anger, they don’t have friends, lovers don’t hang around for long and if they have a family, they’re better off without them. Their past is full of pain and regret, but the future is no less rosy; whether it’s a bullet that does it or the booze, they’re not long for this world. They have hard-boiled names like “Dirty” Harry Callahan (Clint Eastwood, Dirty Harry), Jimmy "Popeye" Doyle (Gene Hackman, The French Connection), Bud White (Russell Crowe, L.A. Confidential) and John McClane (Bruce Willis, Die Hard). Erin Bell, the bruising maverick at the heart of Destroyer, belongs in this company, but does differ from these clichéd brutes in one respect: she’s a she, played by Nicole Kidman.

“I feel like women don't get enough opportunities to be unruly and difficult and unlikeable and confounding,” says Destroyer’s director, Karyn Kusama, when we sit down to discuss her new feature ahead of its UK premiere at London Film Festival. “So for me there was something really exciting about a character who was so frustrating – that really interested me.”

Bell won’t be the first “unruly” woman Kusama has brought to the screen. Her irresistible debut, Girlfight, was a gritty melodrama about a tough teenage girl who takes up boxing and ends up beating up her boyfriend in the ring – the film also introduced the world to Michelle Rodriguez, who instantly became Hollywood’s go-to female hard case. Kusama's whip-smart horror comedy Jennifer’s Body, meanwhile, starred Megan Fox as a high school princess who’s sacrificed by a devil-worshiping indie band, only to mysteriously resurrect as a beautiful zombie who likes to eat dumb, pretty young men. Erin Bell makes these women look like pushovers, though. With bloodshot eyeballs, skin like a sand-blasted beef tomato and crumpled clothes that look like they haven’t left her body in weeks, it might take you a minute or two to spot it’s Kidman behind the bad complexion and heinous haircut. 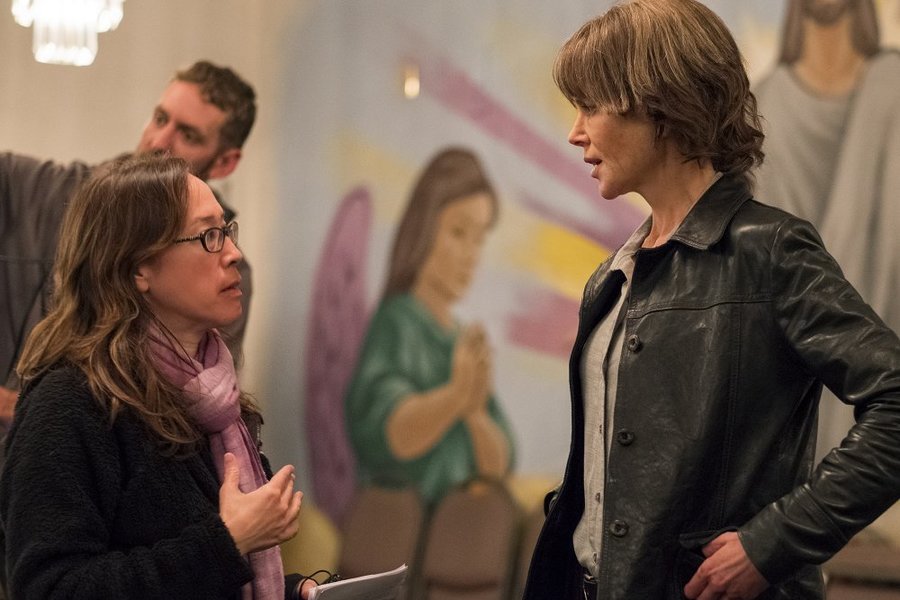 Kidman is a wonderful actor, but maybe wouldn’t be many people’s first choice to play a grizzled cop. It turns out she wasn’t Kusama’s either. “I hadn't initially thought of Nicole at all,” admits the 50-year-old director. “You know, she's so statuesque and so porcelain and kind of flawless. But I think she more than proves herself.” This shouldn’t be a surprise to anyone who’s followed Kidman’s career over the past three decades. Few of her Hollywood peers can claim as diverse and daring a CV. “Nicole's so adventurous,” Kusama agrees. “She might be one of the most adventurous actors I've ever had the privilege to know. She's just curious about the world, and that can translate into so many really interesting choices. And thinking about it, I probably hadn't considered her initially because I assumed she wouldn't consider doing the film, you know? And then the fact that she just dove right in, it was really a nice surprise.”

As a director, Kusama has proved similarly daring and unpredictable. In between Girlfight and Jennifer’s Body, she made big budget sci-fi action film Æon Flux, while her most recent projects are the gut-churning dinner party thriller The Invitation and the standout segment of all-female helmed horror anthology XX. “Thank you,” Kusama says when we note that, like Kidman, we never know what she’s going to do next. “I don't like to do the same thing twice. I like to feel like I'm trying something new and I'm sort of stepping outside of either what's expected of me or outside of a comfort zone for myself, because I do think the greatest privilege of getting to make movies is to try new things and to even fall flat on your face and fail. So that's been my goal.”

She’s certainly attained that with Æon Flux. The film was harshly derided by critics and failed to make back its $65 million budget in theatres. Jennifer’s Body’s box-office performance didn’t set the world on fire either, but Kusama can take solace that the spiky little horror has gained a fervent cult following in the intervening years despite a lukewarm reception back in 2009.

It’s a sad truism in Hollywood that male directors are often forgiven for their ambitious failures (Zack Snyder, Guillermo del Toro and Ridley Scott are three flop-prone filmmakers who spring to mind), but female directors are not. Two critical maulings on the trot saw Kusama retreat back to her smaller scale film roots. The Invitation was shot cheap in a single location and Kusama made Destroyer – despite its epic scope and huge star – on a modest $9 million budget. She seems perfectly satisfied working in this indie realm, however.

‘It is sort of exciting to see a grown woman beat the crap out of a grown man. There's just something elemental about that physical animus just getting worked out’ – Karyn Kusama

“I used to look at each film like it was my last. But I realise now that there is a part of that attitude that's buying into that bias, that sense that a female director or artist isn't allowed to fail at the same rate that a man is. And while that may be true, and I think it is, I do also feel like the only thing that has kept me going was a willingness to sort of start all over and let go of the baggage of failure in the past – or perceived failure.”

The chief appeal of working at this low to mid-budget scale, she explains, is that it allows her to experiment. “I can remain true to myself as an artist. I do feel like it's important for me to be open to risk taking, and kind of jumping off a ledge on a creative level, and then we'll see where I land. I used to kind of have a very grim look at it all, particularly after [Æon Flux], which was a very difficult, soul-crushing experience. But then each film proved to have reasons for being, things that I learned, failures I climbed past, so now I'm kind of taking a more philosophical view of it. The business would like me to believe I can't fail, but that's not ultimately a very instructive way for me to be making movies.”

While Destroyer resembles those classic maverick cop movies mentioned earlier, it does break from the sub-genre in one pleasing fashion: there are no hints of those films’ fascistic overtones. Don’t get us wrong, Bell’s approach to law enforcement is certainly Old Testament, but we’re not entirely meant to be rooting for her. “Revenge is really overrated,” says Kusama. “In fact, it's probably one of the most troubling and negative currents in civilised society, or it's a current that expresses an uncivilised society.”

There’s one thing that Kusama certainly didn’t want audiences to feel as Destroyer's credits roll: that its anti-hero had done the right thing. “The whole movie is ultimately trying to uncover not just the mistakes of her past and her kind of fatal corrupt decisions, but the mistakes of her present. It's interesting, I think that approach creates a scenario for some viewers that's potentially less satisfying, because to me this notion of vengeance should feel troubling. I think we've been conditioned to accept vengeance as a reasonable goal, and I really questioned that.”

In saying all that, there is a certain primordial pleasure to be had in seeing Nicole Kidman kick down doors, pistol-whip information out of lowlifes and, in the film’s most thrilling scene, be a complete badass during an all-out gun fight on the streets of downtown LA. “Don’t I know it,” laughs Kusama. “I thought it was interesting that Nicole’s character had this core of rage that expressed itself on a character level inwardly and on a kind of larger physical level outwardly. And, you know,” she laughs, “it is sort of exciting to see a grown woman beat the crap out of a grown man. I mean, there's just something elemental about that physical animus just getting worked out. Women, I think, have been largely trained and conditioned to, like, stay still and shut up and not fight back, and this is a character who doesn't know how to do that. And so there is something – even if it's transgressive – thrilling about seeing her just not have limits, you know?” We could say the same about the film's immensely talented director.

Destroyer is released 25 Jan by Lionsgate