Karen Gillan has a busy December ahead. As well as starring in a blockbuster sequel (Jumanji: The Next Level), she's also releasing The Party's Just Beginning, which she wrote, directed and stars in. She tells us where her love of directing began

Karen Gillan owned a video camera as a child. Way before she was Amy Pond alongside Matt Smith’s Time Lord in Doctor Who, and before she was a member of the Avengers, the Scottish actress was just a wee lass in Inverness who loved making movies. When it came to directing her first feature, The Party’s Just Beginning (the real deal this time, with an actual crew), the unmatched film school education she received on the sets of blockbuster franchises couldn’t replace the true genesis of her passion for filmmaking: that video camera. “It was my prized possession,” she says. “I would just make all these horror films using my parents and friends as actors. [Directing] felt like I was just returning to that. It felt the same, weirdly. We just had a bigger budget and a better camera.”

We’re speaking to the actor-director over the phone as she prepares for the film’s release on her home turf. In the almost two years between its world premiere at Glasgow Film Festival in February 2018 and the UK release, she roamed a video game jungle with Dwayne Johnson in Jumanji (the sequel is out ten days after The Party’s Just Beginning) and defeated Thanos once and for all in Avengers: Endgame. Suffice to say, it’s been a long wait, but she’s still just as excited that people are finally going to see the film in the “motherland”. Even after touring the festival circuit, including a stop at New York’s Tribeca Film Festival, the audience she cares about the most is at home in Inverness. “That was the one I was most nervous about because I was concerned about how they would feel about the representation of Inverness on screen,” she says, "but people really were appreciative of the subject matter being highlighted.”

Be warned: the title is a bit of a misnomer. Gillan directed and wrote the film, and also stars as Luisaidh, an aimless 20-something stuck in an endless cycle of drunken nights out on the town in Inverness. On her post-club walks back home, she’s continually haunted by the sight of her best friend committing suicide, and the story slowly reveals the events that led up to his death. The Party’s Just Beginning is dark and unsettling through and through, but it’s ultimately a profound story about our reluctance to admit that sometimes we’re just not okay.

Gillan’s childhood filmmaking adventures suggest she has always wanted to direct, but she never saw it as a viable option until she moved to Los Angeles where she was surrounded by filmmakers. “Everybody’s writing something, everybody’s making a movie,” she says. “Male, female, everyone’s doing it. It’s quite inspiring.” It was only a matter of time before she would join her fellow creatives, but her story would take her back to Scotland, far away from the City of Angels.

The inspiration for the story came when Gillan discovered the alarming statistic that a person takes their own life every ten days in the Highlands. “I always thought it was weird because [Inverness] has been voted the best place to live in the UK, and it’s got a high rising population because it’s such a nice place to live,” she explains. “Immediately there’s a weird contradiction there. I think that men have a really hard time communicating vulnerable emotions or appearing fragile or discussing mental health. There's a huge stigma still attached to it, and I think the more we talk about it, the more we can break that down and make it a more comfortable environment for men to express themselves, because there's no change whatsoever in discussing mental health.”

When filmmakers create a story set in their hometown, they usually treat those familiar places with nostalgia and reverence. Think Greta Gerwig’s rose-tinted vision of Sacramento in Lady Bird or basically any movie about New York City. For national cinema as gloomy as the country’s grey skies, look no further than Scotland. If people aren’t quoting Ewan McGregor’s ‘Choose Life’ monologue from Trainspotting, they’re instead reciting his rant about how awful it is to be Scottish. The Party's Just Beginning opens with Luisaidh clinging to the microphone of her local pub's karaoke machine, slurring her words as she makes her own Trainspotting-like declaration of Scottish woe: “A town like this tends to lend itself to an overactive imagination. Ever sit in a solitary place and imagine so hard, you begin to question what the difference is between imagining and living? Why are we settling for such blatant banality?” 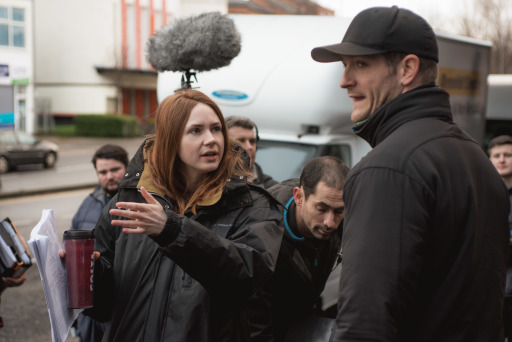 Not exactly inspiring words, but it's all just a part of the roundabout ways we have for expressing our love of Scotland. “There was a scene I took out where [Luisaidh] talks about how much she hates the town but somebody tells her that she loves it,” Gillan says. “We’re not the first people to express emotions like that. It’s more like you’d make fun of each other, and that’s how we show affection for something.”

With her debut feature almost out of her system, Gillan is mulling over what her next film will be. Considering the movies she made growing up, it comes as no surprise when she explains that, despite having no story yet, she’s certain that she’ll be returning to horror. She counts Kubrick’s classic The Shining as her favourite horror movie, and I point out to her that its sequel, Doctor Sleep, was helmed by Mike Flanagan, who she worked with on nifty haunted-mirror frightener Oculus before he became the genre’s go-to director. Is there anything she learned from him that could help her next project?

“He's such an incredible horror filmmaker,” she says of Flanagan without missing a beat. “He's a master editor. That's what his job was before he became a director, so it was interesting to work with a director who was from an editing background, because they are editing as you are filming. He's so creative with the edit and I definitely learned a lot from that, and I have a lot of fun now with the way I cut things.”

The arrival of Gillan’s debut feature certainly marks the end of an era for the actress-turned-director. We're speaking to Gillan a few weeks before she turns 32; she was 24 when she wrote the first draft of The Party's Just Beginning's screenplay. “That’s quite a long time,” she says, voice rising like she's asking a question, as if just now realising how much time has passed. “But I’m ready to get the next one going and show it to everyone.” Hopefully the wait won’t be as long.