Shirley imagines a fictitious period in the life of Shirley Jackson, shot in a way that channels the cult author's writing style. Director Josephine Decker talks to us about the purging pleasures of exploring dark characters and themes

Josephine Decker won’t turn 40 until April next year, but already her CV requires a sturdy binder. She’s 18 acting credits to her name, mostly in films by her fellow US indie directors like Joe Swanberg and Stephen Cone. As a director, she’s made 15 works since 2005, ranging from a talking-heads documentary on bisexuality (2008’s Bi the Way) to an episode of a short-lived teen cheerleading drama (Dare Me) to a Terry Gilliam-esque short fantasy film exploring the transformative powers of a child’s imagination (2012’s Me the Terrible). But it’s her trio of formally daring features – 2013’s Butter on the Latch, 2014’s Thou Wast Mild and Lovely, and 2018’s Madeline’s Madeline – that have marked her out as one of the most original and visually exciting young filmmakers on America’s lively indie scene.

Decker's films look like no-one else's. They’re lyrical, unfolding like pieces of music, but they’re also jagged and uncomfortable; they can turn surreal and nightmarish on a dime. The camera in her film often feels like one of the characters; it's almost always mobile and in among the performers, but also prone to wandering away from the action or observing it from a strange or startling angle. But it also likes to get in close too, intimate and tactile. It’s a style that initially appears chaotic, but the camera always feels like it’s in the right place at the right instant to capture the perfect glance, texture or emotion.

She is a born director, in other words, although it took her a while to figure that out. “I didn’t really know that this was a possibility, that you could do this,” Decker tells us on a spotty Zoom call. “I just remember being a kid and being like, ‘I want to walk along the coast of Africa taking photos and writing for National Geographic.’ That was my dream.” At college, she studied literature but also found herself heavily involved in music. “Those influences turned out to be a great mashup for filmmaking,” she notes, “because as a filmmaker you get to be part musician, part writer, part photographer, part costume designer – which I also did when I was in college. All these things I love sort of fall together into one awesome medium, so I’m very grateful that I found filmmaking.”

Decker is speaking to us from northern California, where she’s trying to work around the COVID pandemic and the state’s still-blazing wildfires – “there are a couple of apocalypses upon us at the moment here,” she laughs – to start shooting her fifth feature, The Sky is Everywhere. She describes it as “a love triangle between grief and life, but it’s a really sweet movie and so fun”. We’re here, though, to discuss her fourth feature, Shirley, and its flavour is decidedly more tart.

The film pivots on a barnstorming turn by Elisabeth Moss as Shirley Jackson, but anyone expecting a conventional biopic of the writer of The Haunting of Hill House and We Have Always Lived in the Castle will be sorely disappointed. Instead, Shirley imagines a fictitious period in the author’s life in the early 50s when her husband, literary professor Stanley Edgar Hyman (Michael Stuhlbarg), invites a newlywed young couple – Fred (Logan Lerman), Stanley’s new assistant, and Rose (Odessa Young) – to live with them in their ramshackle Vermont home.

The offer of accommodation is presented by Stanley as a generous favour, but really he wants Rose to help keep the house straight, as Shirley is in a deep spell of depression and agoraphobia – she's barely able to leave her bed and hasn’t written in months. Initially displeased at having strangers in her house, Shirley soon takes a liking to Rose, who becomes a kind of muse to the author while writing her second novel, Hangsaman. Rose, who comes to the house a timid housewife, also experiences a reawakening. Like Shirley, she starts challenging the social norms of the time.

“Shirley was exciting because it was such a discovery process,” Decker explains. This is the filmmaker’s first feature where she hasn’t originated the script: it’s written by Sarah Gubbins, adapting Susan Scarf Merrell’s 2014 book Shirley: A Novel. “I initially thought we were gonna shoot it in a much more locked-down, Hitchcockian way, but then there was something so visceral and sensual and tender about the relationship between Rose and Shirley that we ended up shooting it much more handheld because we wanted to be there and get in close and interface with the actors. It’s always a discovery process when you get in there with your collaborators. The movie in your head is very rarely the movie you end up making.”

In a way, one of these collaborators was Jackson herself, as her writing proved one of Decker’s chief stylistic influences. “We were much more focused on putting the audience into a Shirley Jackson-type story, rather than replicating Shirley Jackson’s life,” she explains. “So my research was much more about reading her work. I did research her biography too, but I was trying to think how she would do this story herself.” How do you reckon it turned out, we ask. “We’ll never be as good as the magician herself,” Decker laughs, “but we did our best.” 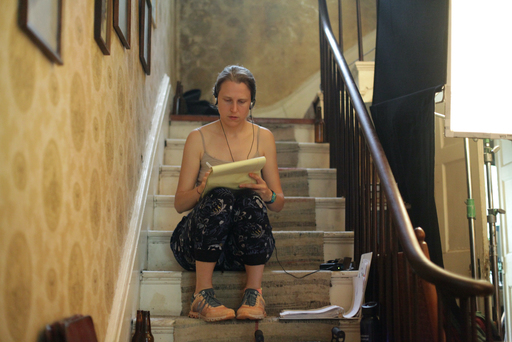 Delving into the darker recesses of creative people's minds isn’t a new subject for Decker. Her elliptical psychodrama Butter on the Latch concerned two performing artists who have their friendship tested at a music retreat, while Madeline’s Madeline focus was an experimental theatre company whose vampiric director was mining the troubled mind of her teenage star for inspiration. When we ask Decker why she’s drawn to this subject, she compares it to mild-mannered actors who love to take on dark roles. “I think I’ve wanted to explore, 'What if this [the creative process] went horribly wrong? What if I put the version of myself on film that I would never be in real life?' Sort of out of curiosity, but also as a kind of cleansing.

“I definitely felt that with Madeline’s Madeline when I was writing that character, and Lizzie Moss said one of the reasons she wanted to play Shirley was that connection with some aspect of darkness; she was excited to play somebody who has that edge. So it’s sort of being drawn to the side that you would never get to explore in your real life. That’s what makes art-making fun, you get to – as a creator, as a director – be inside of these characters’ minds so I get to become them, sort of, even though I would never do the things they do in real life. It’s almost like you’re purging something.”

We’re not sure Decker had to do that much imagining to get inside Jackson’s head; as artists, they seem like kindred spirits. “Oh totally,” agrees Decker. “I mean, I think of her as such a genius, so I don’t try to hold myself up to that, but I think I am interested in similar things. I’m really interested in how you move from an objective reality into a subjective reality in a way that the audience isn’t even aware that you’ve done so, and she does that in a lot of her work. Like The Haunting of Hill House, you think that you’re observing these characters and then all of a sudden you realise you might have spent the last 20 pages inside one of the characters’ minds, but you’re not sure when it went off the rails. It’s such an exciting way of telling stories.”

We couldn’t agree more. It’s what makes Decker’s films so thrilling to watch too.