Ahead of the release of his Beauty and the Beast-esque romance The Shape of Water, Guillermo del Toro talks to us about pitching movies, 'Make America Great Again' and what love is

“I said it’s R-rated, it’s Sally Hawkins, she masturbates, and they fuck. If that’s alright, we’ll make the movie.”

Mexican director Guillermo del Toro is giving us an idea of the pitching process for his latest feature, The Shape of Water. Following 2015’s Crimson Peak, this new film is another romance with fantastical elements and plentiful gore, albeit one with a more hopeful streak than that gothic tale.

Set in Cold War-era America in 1962, Shape follows Elisa (Hawkins), a mute woman working as a janitor in a high-security government laboratory. Bar friendships with her co-worker, Zelda (Octavia Spencer), and closeted gay neighbour, Giles (Richard Jenkins), Elisa lives a somewhat isolated, routine-based existence. That is until, one day, she encounters a classified specimen that’s been brought in to her workplace: a humanoid-amphibious creature (à la Creature from the Black Lagoon), played by Doug Jones, that’s being held in captivity and experimented on by a tenacious colonel (Michael Shannon) and a more empathetic scientist (Michael Stuhlbarg). As a Beauty and the Beast-esque relationship develops between Elisa and her fish-man, a plan is set in motion to free the creature before it’s dissected.

“I pitched it to one single entity,” del Toro tells us, “which was Fox Searchlight. I did that because Alejandro [González Iñárritu] had a great time with them doing Birdman. And I pitched it and I knew it was working because, like when I was pitching Pan’s Labyrinth, at the end everyone was crying and I was choked up. I could barely finish the pitch. It’s working because it’s an act of communication. People think you can get all these business books about the movie business – bullshit. Instead, do you have something that hurts you? And can you communicate that hurt or that hope? And they said yes. Then I pitched it in black and white and they said no. They said we’ll give you 16.5 [million] if it’s black and white, if it’s colour it’s 19.5. I said, hell, I’ll take colour! I’ll take colour for 19.5. And I said I’ll colour code it so that colour becomes an advantage and part of the beauty.”

Though the quantity of his directorial output has been on the upswing of late (Shape is his third feature in five years), del Toro is nearly as well known for movies he almost made as much as for those that did make their way through the brutal green-lighting process. To name just two, he was originally set to direct The Hobbit before studio troubles delayed production, while HP Lovecraft adaptation At the Mountains of Madness fell apart in 2011 due to budget concerns for an R-rated film, despite Tom Cruise and James Cameron being attached as star and producer. 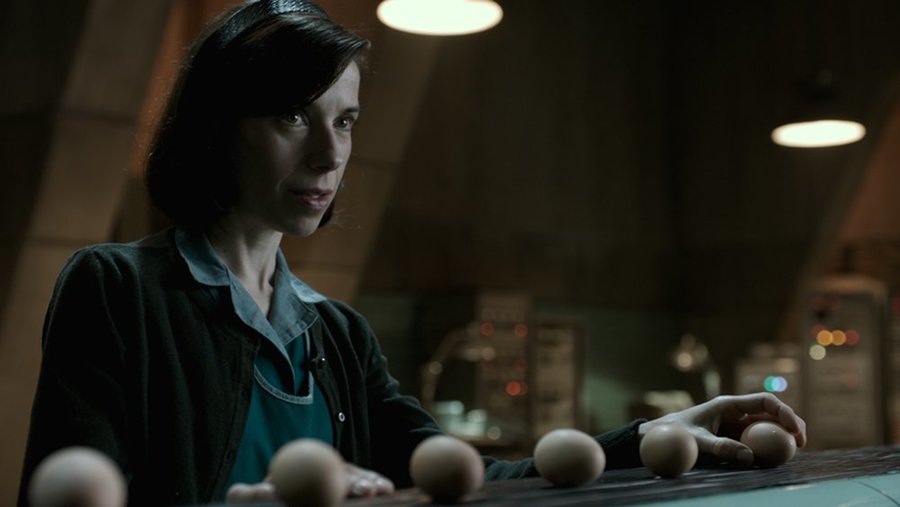 Sally Hawkins in The Shape of Water

What made him persevere with The Shape of Water at this moment in time, over, say, the sequel to Pacific Rim (he retains a producer credit on that Steven S. DeKnight-directed blockbuster), which is due for release this spring?

“I really, really needed to make it,” he says. “We were prepping Pacific Rim 2 and there was an impasse where they said we’re gonna delay it six months and the choice was: do I wait six months for a big payday, or do I get the fuck out of dodge and make the movie that is gonna be super risky and is not gonna pay me a single cent? But I needed to make it and I went, ‘I’m getting the fuck out of dodge.’

“It was urgent for me because I am 53, I’ve done ten movies and nine of them have been paraphrases of my childhood. This is the first movie I’ve made as an adult, and the way I feel as an adult. I may have originated it when I was six, but the way I talk about the movie, I talk about it like an adult and about adult concerns. About what I think about love, which is when you look at me, and you don’t look at me like I’m incomplete, then that’s love. That’s love. You don’t need to change; you don’t need to do anything. That’s it.”

Like most of del Toro’s filmography (which also includes The Devil’s Backbone, Cronos, two Hellboy films, Blade II, and Mimic), The Shape of Water is informed by the director’s much-discussed affinity with the monsters, spirits and outcasts of fantastical fiction of the past. But while Beauty and the Beast and Creature from the Black Lagoon are obvious reference points for the story, the film’s setting and period details bring to mind a wealth of movies that have looked back on early 60s America with scrutiny.

“No, [but] that is a good movie. Matinee is the Cuban Missile Crisis at its height, which is interesting because [Dante] juxtaposes the horror film with the horror of that madness, so it, topically, is about that. I think this is more about using an America in '62 that was idealised to the point of fantasy – America in '62 became ‘Once upon a time,’ So the imagination of the US is that when they say, ‘Let’s make America great again,’ they’re dreaming of that America, which is a fantastic America if you’re a white male heterosexual. The rest of the people don’t have a great deal.

“It’s an America that is obsessed with the future,” he continues. “That’s why in the movie, the colour green is used for the future, whether it’s the fucking gelatine or the car or the striping of the walls in the lab. Everything that is the future is green. There’s a huge wealth that comes through to America after World War II. There’s an influx, there are houses in the suburbs, tailfin cars, TV in the living room, TV dinners, the Space Race. And then Kennedy gets assassinated; the Vietnam War escalates. And that green ends up being the carrot at the tip of a very long stick for the horse. And people think, why didn’t we fulfil that? Why don’t we have a car in every garage? Why don’t we have the money? And then you’re open to ideology, so it’s about now.

“If you look at the problems that are depicted in the movie – sexism, casual racism, horrible racism, the Cold War – these are exactly the same things that are alive [now]. But if I do it in the present, I lose two things. I lose the ‘Once upon a time’ – this ‘Once upon a time in 1962, there was an America that never came to be.’ And in it there was a monster. And where the monster lived, there was a woman that cleaned toilets for a living, in silence. Then you have a fairytale. If I [set] it now, it becomes a movie which reads to be [solely] political, as opposed to that being just one flavour. It’s about now. And then it dates it and it kills it and it takes the magic away.”