Eliza Hittman's sophomore feature, Beach Rats, is an evocative tale of a Brooklyn teen's struggle with his sexuality. We speak to the New York filmmaker about the appeal of young characters, filming sex scenes, and gender politics in film, TV and academia

“I’m not aspiring to explain the psychology of the character to the audience,” says Eliza Hittman of her style as writer-director. “That’s not my job. In a way, I’m more interested in exploring the complexity and contradictions in our behaviour. And the audience can think about why. I’m not trying to answer those questions.”

We’re on the phone to the New York-based filmmaker about her sophomore feature, Beach Rats, for which she picked up a directing award at this year’s Sundance Film Festival. Hittman’s intimate 2013 debut, It Felt Like Love, made some waves on the festival circuit, but Beach Rats has already picked up the kind of acclaim, and subsequent international distribution deals, that one hopes will lead to more consistent opportunities for the rising talent, who also currently works as a film professor.

“I fell into academia after I made It Felt Like Love,” she tells us of her other career, “and there wasn’t that much interest in what I was gonna do next. I just kept getting all of these speaking engagements from the film and academia kind of swept me up, I would say, and embraced me.

“I’m not sure exactly how the two are gonna work together for the long haul because now my filmmaking career has become more demanding in a way. But I enjoy mentoring students, particularly female students. And I can definitely see how the gender politics even in academia begin to mirror or reflect the sort of gender politics that exist in the [film] industry. So it’s one arena in which I feel like I can try and combat and champion female directors, and help people who think that they don’t have a voice feel like they do have one.”

Unlike It Felt Like Love, which was about the sexual awakening of a 14-year-old girl, Beach Rats is not centred around a female protagonist. Instead, it’s about an older male teen in Brooklyn, Frankie (Harris Dickinson), who’s got a potential new girlfriend in the form of Simone (Madeline Weinstein). However, unbeknown to Simone and his boardwalk bro friends, the eponymous beach rats, Frankie is hiding both a family tragedy and an interest in meeting up with older men he meets in online chatrooms.

As Frankie, British newcomer Harris Dickinson is a revelation in his first feature film role, with a thoroughly convincing accent that never feels out of place with the native NYC-ers he often shares scenes with. When it came to casting people to play Frankie’s buddies, Hittman tells us she explored some non-traditional methods.

“I cast a lot of the guys who play Frankie’s friends in different parks in Brooklyn that were along the water; different handball courts. I sent PAs out and they spent hours in parks getting to know people and seeing if they would be interested in auditioning. And I did most of my auditions in those parks, as well. I never tried to bring anybody into an unfamiliar context because then all of a sudden they’re trying to act for you, and that’s not what we were looking for. So I tried to look at people in the context of their world.

Young actors, for me, are a gift because they’re so open and they understand the immediacy of acting" – Eliza Hittman

“I think I’m drawn to working with young actors and exploring stories about youth,” Hittman says of her filmography. “Young actors, for me, are a gift because they’re so open and they understand the immediacy of acting. I think you can capture something that’s authentic that is harder to do when you’re working with more trained, older actors. I think that adolescence and teenage years are defining in ways for young people in terms of the development of their identity through how they see themselves in the world. I never get bored watching movies about young people trying to figure out who they are."

On that note, Beach Rats’ cinematographer, Hélène Louvart, has previously worked with Larry Clark, the controversial director of Kids and Bully. Considering his films’ plentiful sequences of sexually active teens, we wonder if Louvart brought to the table any shooting suggestions for Beach Rats’ scenes of a sexual nature, which include the rare onscreen sight of male full frontal nudity in an American film.

The answer: “Not so much, actually. I asked her a little bit about how Larry Clark deals with actors in relation to sex scenes, and Hélène basically said, ‘Larry, he just does it.’ There’s no conversation; when people commit to doing this scene, they just do them. He doesn’t overcomplicate or over-discuss the psychology of the scenes. They just do them.”

Louvart did, however, participate in key research for the element of the online pick-up world that features in the film. “Some of the cruising spots along the water were real and Hélène and I spent some time in the middle of the night in those spots, observing transactional moments between men, and that informed how we shot and staged those moments." 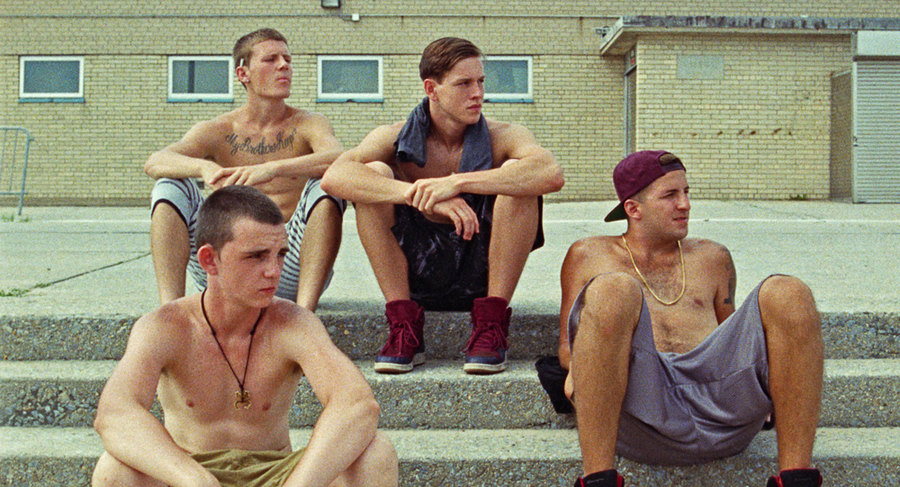 In its focus on male physicality and a specific form of masculinity, Beach Rats has seen some comparisons to Claire Denis’ Beau Travail. In other interviews, Hittman hasn’t been keen on the comparison, not out of any dislike for Denis’ film but for the possible suggestion that two women directors can’t explore these particular masculine concerns without being directly compared.

Concerning how the film’s look was conceived, we find out that photography, more than any existing films, informed the aesthetic, though Hittman does tell us that the likes of Saturday Night Fever, Requiem for a Dream, Little Fugitive, The Lords of Flatbush and The Warriors were all “loose influences on my desire to make a film about lost youth in Brooklyn.

“I had a lot of photography references for the film,” Hittman says. “I was looking at work by a photographer from Chicago in the 80s named Barbara Crane, and she did all these Polaroids in a series called Private Views and she captured these intimate moments between people’s bodies in the middle of a sweaty summer. And that informed some of our more fragmented close-up, physical, behavioural interactions between characters. And I was also looking at a photographer from the late 60s named Danny Fitzgerald, and he took pictures in his studio of Brooklyn gang members and there’s something very sculptural and simultaneously aggressive and erotic in the portraits.”

As our call concludes, we get a little insight into Hittman’s recent foray into the world of popular television: “I did this Netflix show, 13 Reasons Why, and there was obviously a lot of thematic crossover between what I’m interested in and what the show is exploring. A lot of the crew had worked together for like 20 years – there were crew members on the set who had collaborated on The Wonder Years. So there’s most definitely this sense that this still can be a white man’s world, I guess.

“There’s definitely an energy of people in that environment wanting to teach you things in this way in which they’re trying to sort of show and exhibit their power and expertise, and you have to believe in yourself and stick to what you planned and push through the day, ultimately, because they weren’t hired to stage the show. They’re hired to operate a camera or to be a second AD. It was a challenging lesson for me in how strong I needed to be in terms of my own vision and get what I needed, because in the end they’re not the ones sitting in the edit suite.”