Chris Pine and David Mackenzie reunite to tell the story of Robert the Bruce's rise from servile nobleman to king of Scots in epic action film Outlaw King. We speak to both about bringing this complex character to the screen

Heroes are easy. Real characters, people who are flawed and complex and full of contradictions, they can be tricky — but they’re so much more interesting. That’s the gist behind David Mackenzie’s obsession with telling the story of Robert the Bruce. For over a decade, the talented Scottish director of Young Adam, Hallam Foe and Starred Up has been trying to put a film together about the King of Scots – and not simply because he’s a national hero.

Mackenzie walks into a hotel suite in London wearing a long mane of hair and an elaborate beard that wouldn’t look out of place among the hirsute ensemble cast of Outlaw King, the Robert the Bruce epic he eventually made in Scotland with considerable financial backing from Netflix. He’s accompanied by Hollywood star Chris Pine – who plays Robert – who’s dressed all in white like he’s come from the set of a Backstreet Boys video. While Pine, gregarious and confident, fiddles with the suite’s Nespresso machine, the more mild-mannered Mackenzie sits down and fills us in on his obsession with this historical figure.

“The romantic, glorious failure of William Wallace has somehow eclipsed the true strategic brilliance of Robert the Bruce. We wanted to right the wrong of that imbalance” – David Mackenzie

“It’s the story of somebody who went right down to the bottom and then pulled himself up, unified his divided country, gathered some strength and threw out a tyrannical occupation,” says the 52-year-old filmmaker. “That's a strong story, and one that's strangely not been told.” Robert the Bruce has featured on screen before, however. As played by Angus Macfadyen, you’ll find him lurking in the considerable shadow of Mel Gibson’s William Wallace in Braveheart, hovering between sides until the film’s epilogue in which he leads the Scots to victory against the English at Bannockburn. Mackenzie reckons that story deserved more than the footnote it got in Gibson’s Oscar winner.

“The romantic, glorious failure of William Wallace has somehow or other managed to eclipse the true strategic brilliance of Robert the Bruce,” says Mackenzie, “and so part of the reason we want to tell the story is to right the wrong of that imbalance.”

Pine, espresso now in hand, joins us. “William Wallace was presented as such a perfect moral hero,” says the 38-year-old actor. “[Robert the Bruce] is not that; he's the anti-William Wallace. Is he machiavellian? Is he biding his time? Is he a super strategist? Is he weak? Is he strong? He’s all of these things. He's very, very human.” 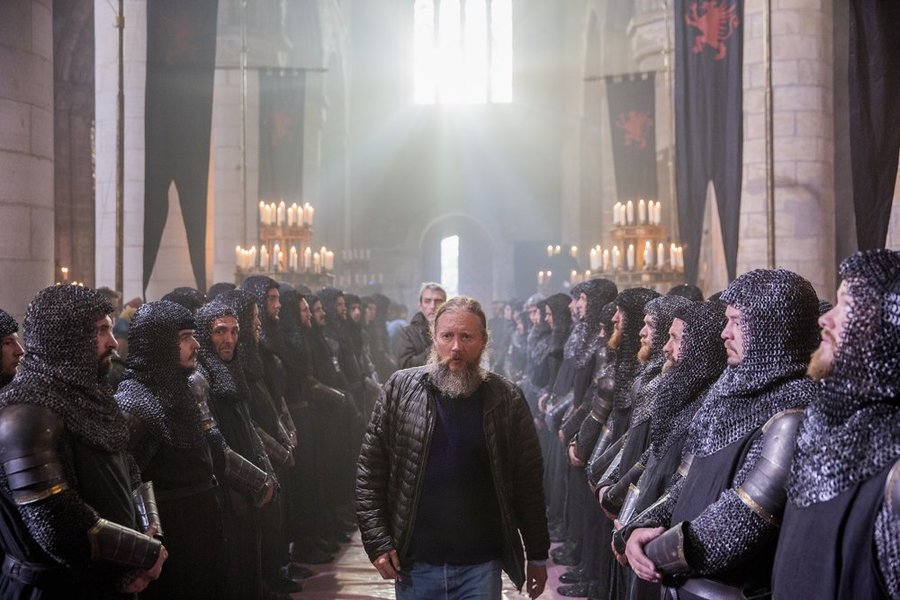 David Mackenzie on the set of Outlaw King

This conflict is clear from Outlaw King’s extraordinary opening scene, an unbroken eight-minute steadicam shot that introduces us to the major players and murky politics of early 14th century Scotland. As well as including a less-than-friendly sword duel between Robert and the Prince of Wales (Billy Howle) and the unnecessary firebombing of Stirling Castle (they'd already surrendered, but the English had spent three days building the catapult), we also see Robert submitting to King Edward, played here by Stephen Dillane.

Pine says he was knocked out by the opening. “To start a film where the guy could not get any lower, I mean he could be laying down. To start the hero journey that way, that's strong stuff.” Although it’s clear Pine is still trying to work through why Robert did acquiesce so readily to Edward. “I talked to this wonderful historian who wrote his thesis on Robert the Bruce, and I said, ‘Why did he kiss the ring?’ and he was like, ‘I don't know why'.”

“Because he was forced to, all [of the Scottish lords] were,” interrupts Mackenzie, and you get the sense they’ve had this debate several times before.

“David, I'm not saying he was a pussy. I would have probably done the same thing. These are all complex questions about a complex man that I thought were very interesting. I wasn't judging the man, just like I don’t judge William Wallace. Yeah, Wallace was super brave, but he also died really young and he didn't accomplish all that much. So what's better or worse, I don't know?" 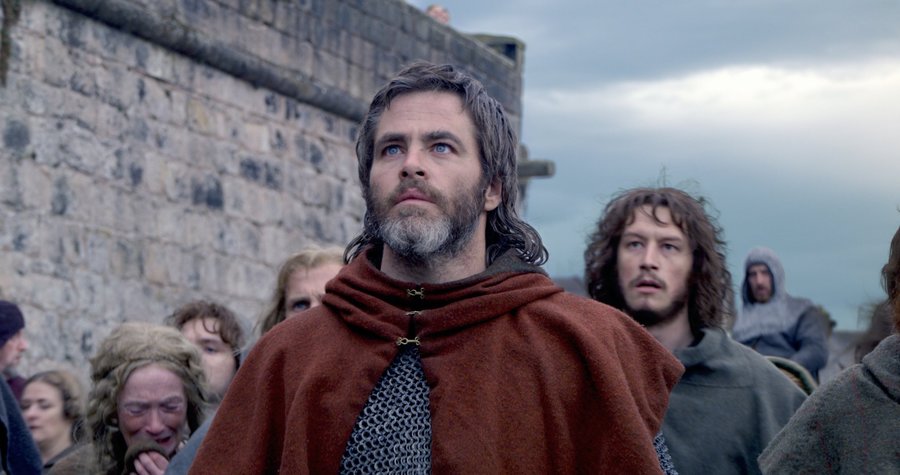 Chris Pine as Robert the Bruce in Outlaw King

It’s rare to see a director and actor be so candid with each other in an interview context, and this speaks to Mackenzie and Pine’s special relationship. They worked together previously on the splendid, soulful Texas crime thriller Hell or High Water, with both men doing some of their finest work to date. The picture was Oscar-nominated; Pine and Mackenzie should have been. Every actor worth his/her salt needs that great filmmaker for whom they can explore their craft more deeply. Michelle Williams has Kelly Reichardt, Leonardo Dicaprio has Martin Scorsese, Michael Fassbender has Steve McQueen and it seems Pine might have found his chief collaborator in Mackenzie.

“I feel like we’re true partners,” says Pine when we ask about him working with Mackenzie for the second time. “David's an astronaut and also a spelunker, you know: he likes to just dive down and figure some shit out. As I've said before, David is like the greatest jazz artist of all time and I'd never worked with a real jazz artist filmmaker. To play with this kind of money with this kind of artist is really exciting. I knew I was taking a big risk because it's a lot of money and David is the kind of filmmaker that you have to be brave if you're a company going into bed with him, because David wants to get weird. That's what makes David great. He's an explorer. He says, ‘I don't know, what is it about?’ Working with him is a blast.”

“And it's fantastic to build on a relationship,” adds Mackenzie. “And to take things that you've learned and some of the shorthand you have with each other and explore it and be more adventurous and give each other permission to take each other further. That was the really good thing and I'm very happy about the results.”

In films like Star Trek and Wonder Woman, Pine’s goofy grin, casual charisma and piercing blue eyes are enough to make him an engaging presence, but there’s a sense that he’s truly pushing himself in his work with Mackenzie, and in particular with Outlaw King. First off, there’s the high wire act of performing in a (rather solid) Scottish accent. There’s a slight defensiveness from Pine when we bring up his Scottish brogue – “I'm an actor, man. That's what I do, play other people” – but he does admit to some reservations. “I mean, I've done accents before and been absolutely crucified for them. But, you know, the great thing about having been crucified before about that is that it can't get any worse. So I figured I'd go for it. Plus I knew it was important to David, so he'd be honest with me when it wasn't working – and he was!”

Pine doesn’t just expose himself to criticism by doing an accent, he literally exposes himself in a full-frontal skinny dipping scene that got many Hollywood critics hot and bothered when the film premiered at Toronto Film Festival. Pine clearly doesn’t see what all the fuss is about though. “We're all grown adults getting excited about something that's separated by very little clothing, and yet there are movies with people sawing heads off and you can show that to a 13-year-old in my country and it's not a problem. But you show people having sex, it's NC-17 and your mother's going to hide you from it. So if you distill that down, there's something about showing intimacy which is verboten, but showing violence it's thumbs up.”

With Mackenzie, intimacy and violence often interwine. His films can be broken into three categories. The ones about love and sex (Hallam Foe, Spread, Perfect Sense), those about violence and masculinity (Starred Up, Hell or High Water) and the films about both (Young Adam, Asylum). Outlaw King belongs in the third camp: it’s both a brutal war film and a tender love story, with Robert’s bloody uprising interrupted by the passion that sparks between him and his new wife Elizabeth de Burgh (played by Florence Pugh), a marriage arranged by King Edward.

Mackenzie, who’s clearly a romantic, relished that combination: “The history of Robert and Elizabeth, of an arranged marriage that could've just been of convenience, it turns into a real connection and then, you know, they're separated and she's captured and they’re apart for many, many years. Then for Elizabeth to choose to come back and rejoin her husband and start a family, that gives us a fairytale ending, which is history that really happened. And it's great to be able to have that within this kind of down-to-earth, bloody, muddy story about power.”

Outlaw King is released on 9 Nov via Netflix, with additional theatrical screenings in selected cities