The short films from Bryan M Ferguson have always been horrific and peppered with violence. In Caustic Gulp, experimentation with swimming pool chlorine ends with a body in a bloody bathtub while Flamingo’s climax is the kind of body horror that might make even David Cronenberg squirm. There’s existential horror in Rubber Guillotine for a young woman who wants to be transformed into a lime jelly, and Toxic Haircut features the bloodiest goings-on down at a barber’s shop since Sweeney Todd. With his latest film, commissioned as part of Channel 4’s Random Acts and screening on the channel this Halloween, Ferguson fully embraces the genre.

Titled Satanic Panic '87, it concerns two teen siblings – Pike and Koda – attempting to gain access to the gates of Hell. Their mission is going well, although their mother is getting on their nerves with her constant nagging about where their cat, Mormo, is.

As is usually the case with Ferguson’s work, it’s a visual and aural assault, but there are some changes to Ferguson's usual aesthetic. His previous films are instantly recognisable from their crisp framing and use of bright, acid colours, but with Satanic Panic '87 he’s gone for something scuzzier, with a heavy metal soundtrack and a more dynamic camera style. We spoke to Ferguson ahead of Satanic Panic '87’s screening on Channel 4 to get the lowdown.

The Skinny: What was the genesis for Satanic Panic '87?

Bryan M Ferguson: My adoration for '80s horror cinema aside, this, like a lot of my ideas, came from somewhere but I’m just not entirely sure where. I’ve had the idea of two metalheads and a satanic '80s aerobics tape for about three or four years, scribbled down in note form. It wasn’t until I met with the folk at Random Acts that the idea was growing legs, too many legs – I had a longer version written but managed to hack it down to four minutes and we pack in a lot of mayhem in that runtime. But when it comes down to a genesis – maybe I just wanted to see if Random Acts/Channel 4 would let me get away with a granny murder and demonic armchair.

All of your films flirt with horror in some way but this might be your most out-and-out horror film. What draws you to the genre?

I have definitely flirted with horror in the past – my mind just goes there when making anything. To me this is the only horror film I’ve ever made (Toxic Haircut aside). I was getting really sick and tired of putting out work and having some people compare my work to “shlock” or labelling me a “shlockmeister” – all terms I find massively offensive. I don’t see my work like that and I’m certainly not aiming to make trash cinema (as much as I adore it). I figured I’d make something that was a reaction to that, to make something that was actually within the realm of horror but lace it with dark humour – because as much as the misunderstanding/pigeonholing of my work can irk me, I still think it’s better to make work that’s divisive. 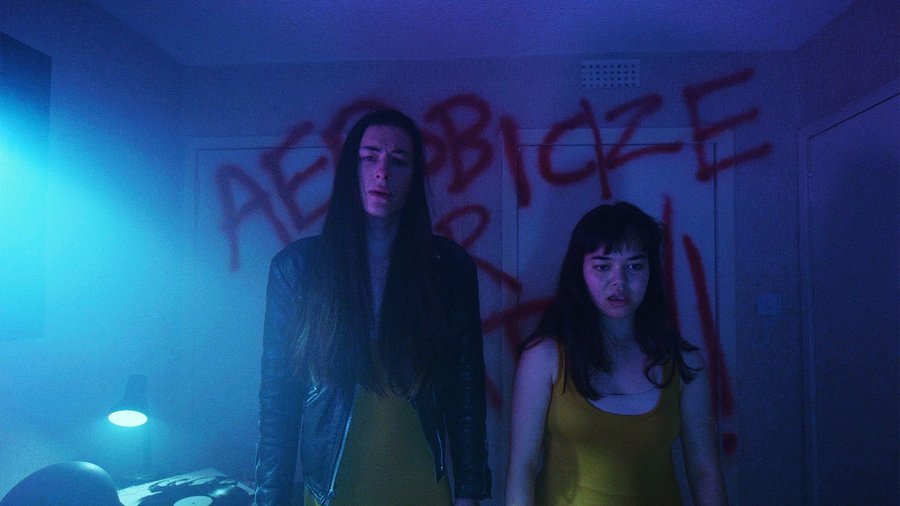 We sensed some shades of J-horror classic Ring in Satanic Panic '87. What is it about VHS that’s makes it so creepy?

I never really saw a connection to Ring, so that’s interesting you mention it. As for VHS, I think it’s only creepy if it’s being penetrated into James Woods’ stomach cavity.

There are loads of other references in there too I suppose. Who else were you channelling?

This for me was like a love letter to all the scary films I watched to death in my early teens. I think I was able to channel the Evil Dead era of Sam Raimi through the operatic camera movements, making the camera feel like a character in itself and mashed that with shades of Joe Dante’s puppet horror via our nasty demon armchair.

How was the experience working with Random Acts?

It was really laidback. When you first get involved in something like this you automatically think you might lose out on your own stamp on the project but they are really supportive and genuinely encourage the filmmakers to be innovative without obstruction, which was really liberating.

How does it feel that your film will be broadcast on Channel 4?

It feels surreal. I’ve been working on my stuff without any sort of institutional funding for close to ten years and to have my latest film be commissioned by and set to premiere on Channel 4 feels like a real affirming moment in my career. It’s an exciting time.

Take a look at Satanic Panic '87 in the player above or on YouTube; more info on Random Acts at www.channel4.com/programmes/random-acts/episode-guide